HAWAII ISLAND - On Friday, gas measurements of the Puʻu ʻŌʻō plume indicated an emission rate of over 1,000 tons/day of SO2, the highest rate from this vent in several years. 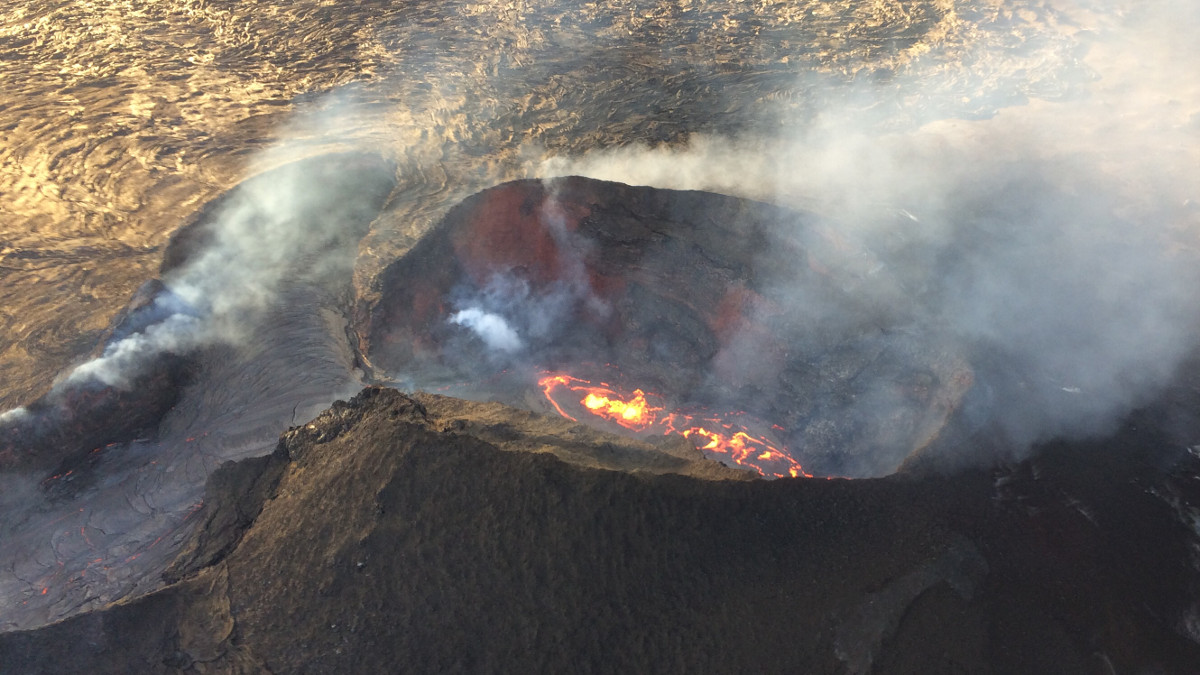 (USGS) Looking more directly into the fissure 8 vent this morning, the inner walls of the cone and lava surface could be seen. The level of lava within the vent and spillway (left) were down compared to yesterday. A dark crust, which forms as the lava surface cools, had formed on the lava with the spillway.

(BIVN) – Scientists with the USGS Hawaiian Volcano Observatory on Sunday provided a thorough update on the changes in the Kilauea eruption, tracking activity on the lower East Rift Zone, at the summit, and at Puʻu ʻŌʻō.

“This morning’s helicopter overflight confirmed a significant reduction in lava output from fissure 8,” wrote the USGS in a 9:16 a.m. update. “HVO field geologists observed low levels of fountaining with the fissure 8 spatter cone and largely crusted lava in the spillway and channel system downstream.” 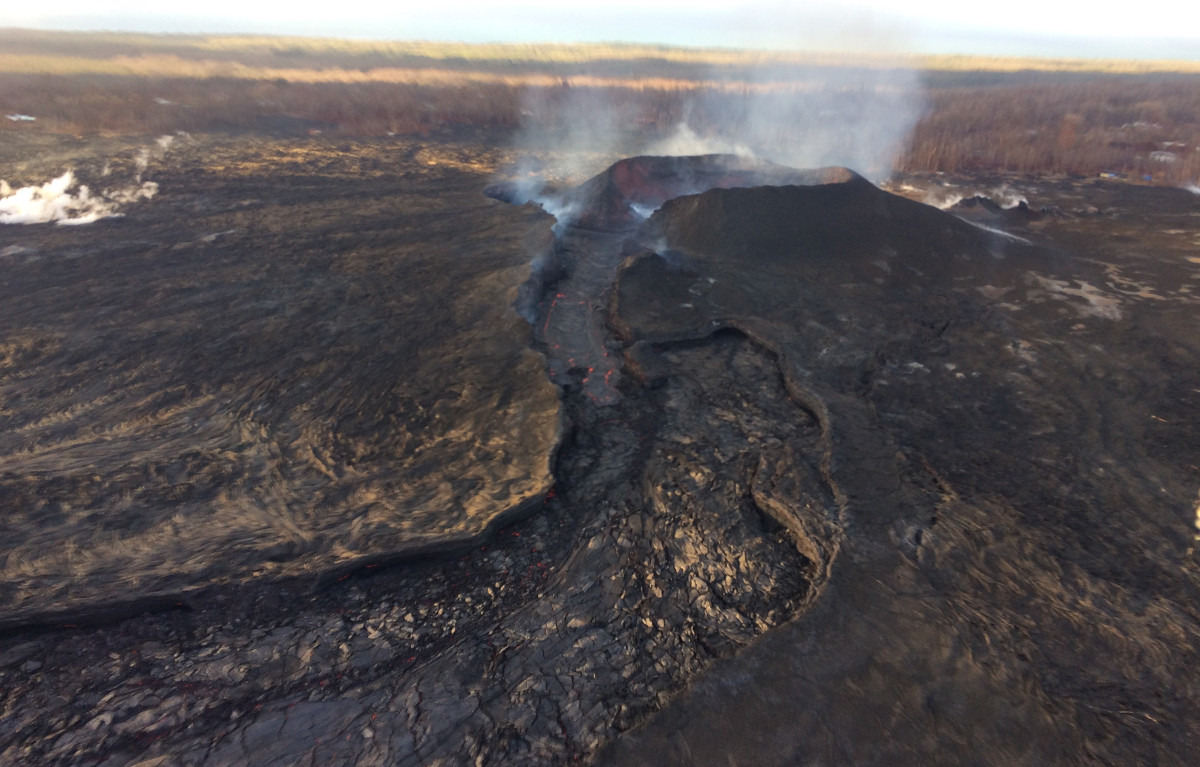 (USGS) View of the fissure 8 cone and spillway from HVO’s overflight early this morning, during which geologists observed eruptive activity that was much less vigorous than in past days.

There were a few sluggish seeps and ooze-outs near Halekamahina and Kapoho Crater, USGS reported. 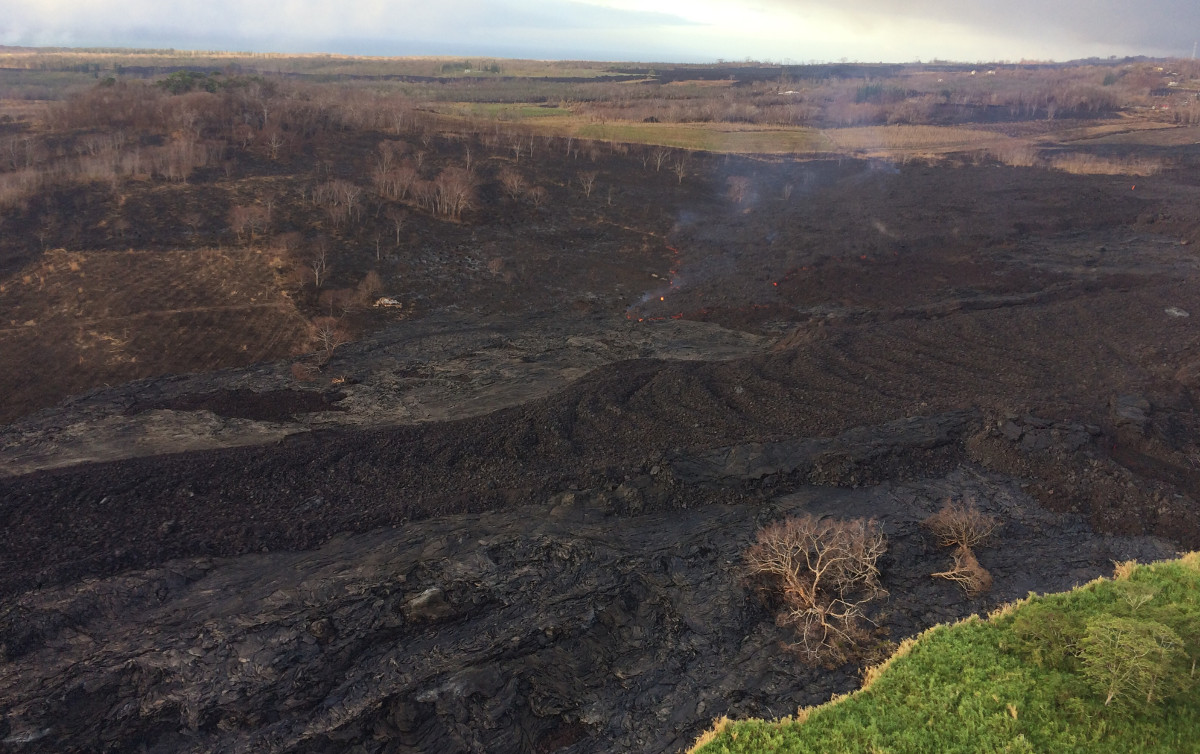 (USGS) An ‘a‘ā flow on the western flank of Halekamahina, a cone west of Kapoho Crater. Lava breakouts on the north and east sides of Kapoho Crater were also observed during this morning’s overflight. 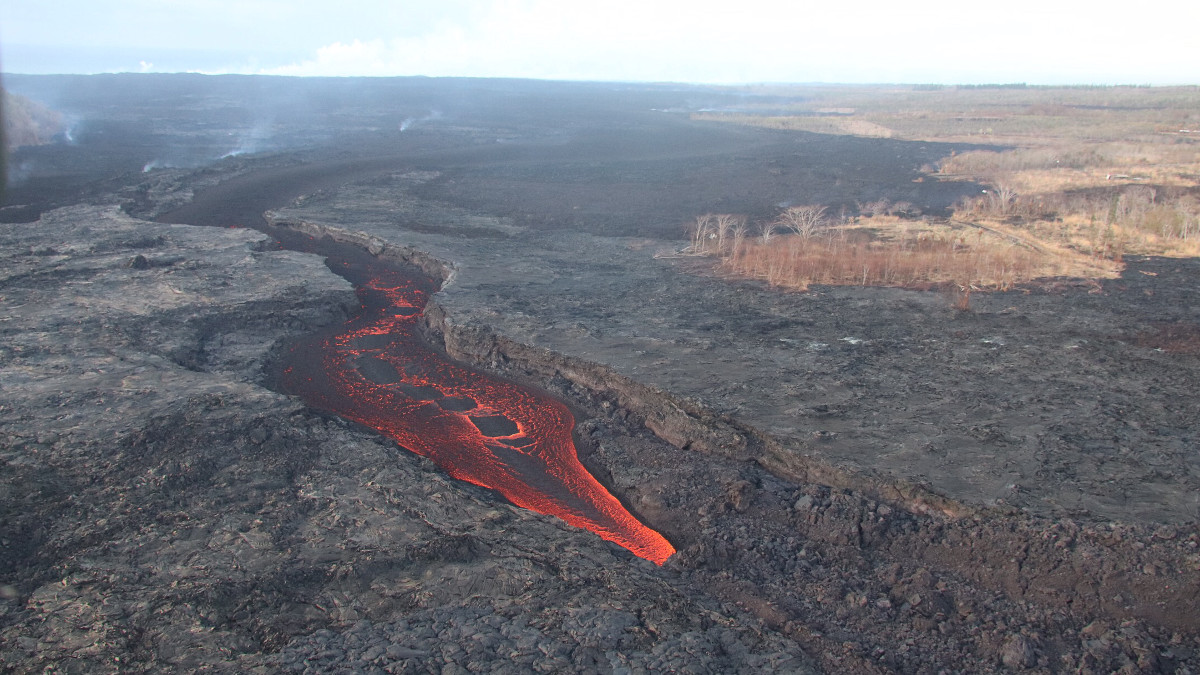 (USGS) Incandescent lava remained visible in a section of the fissure 8 channel west of Kapoho Crater (just visible at far left). This view is looking south toward the ocean; the laze plume rising from the ocean entry can be seen in the far distance. According to geologists flying over the area, the flow appeared be the result of draining from the upslope channel; no discernible movement was observed.

“Lava continues to ooze into the ocean along a broad flow front and laterally toward Pohoiki but is still about 70 m (230 ft) southeast of the boat ramp,” USGS reported this morning.

(USGS) A diffuse laze plume afforded a clear view of Isaac Hale Beach Park and the ocean entry, which was being fed across a broad front by viscous pāhoehoe. 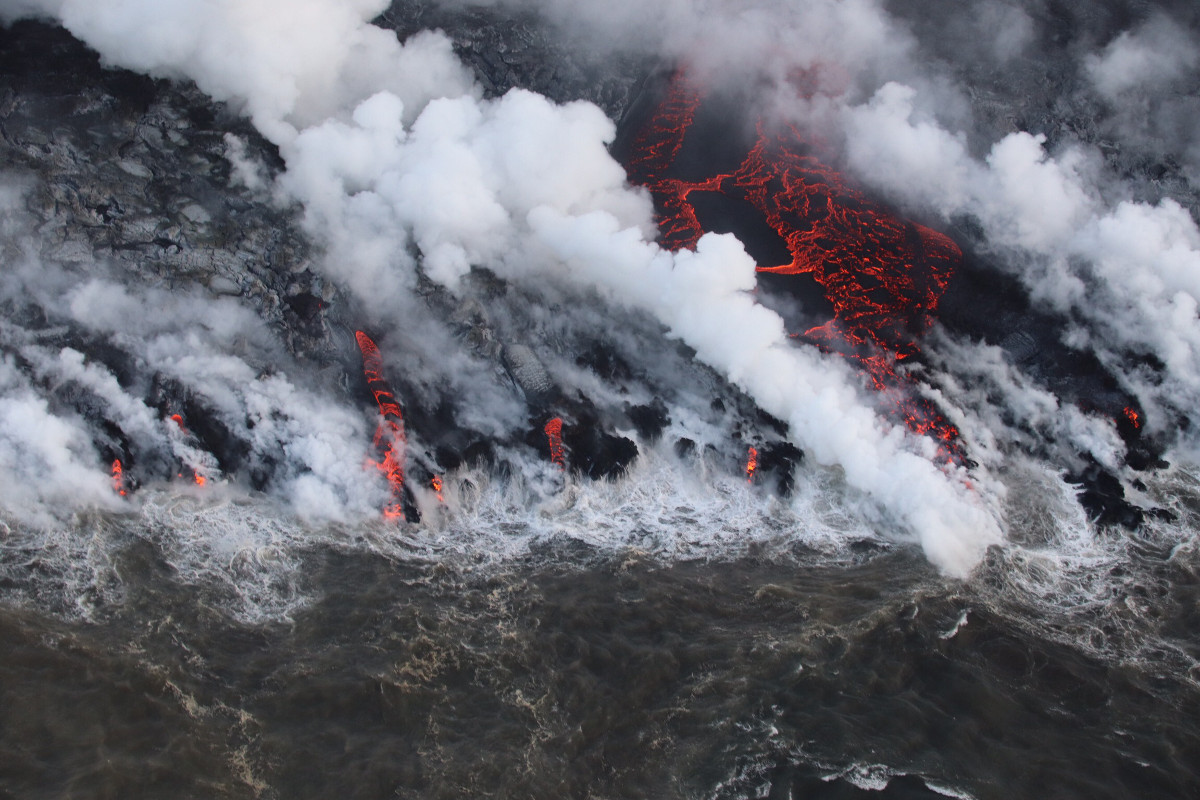 “The significance of this change is not yet clear and hazardous conditions remain in the area,” the USGS stated. “HVO field crews and the UAS team will monitor activity throughout the day. It is common for eruptions to wax and wane or pause completely. A return to high levels of lava discharge or new outbreaks in the area of active fissures could occur at any time. Residents should remain informed and heed Hawaii County Civil Defense messages and warnings.” 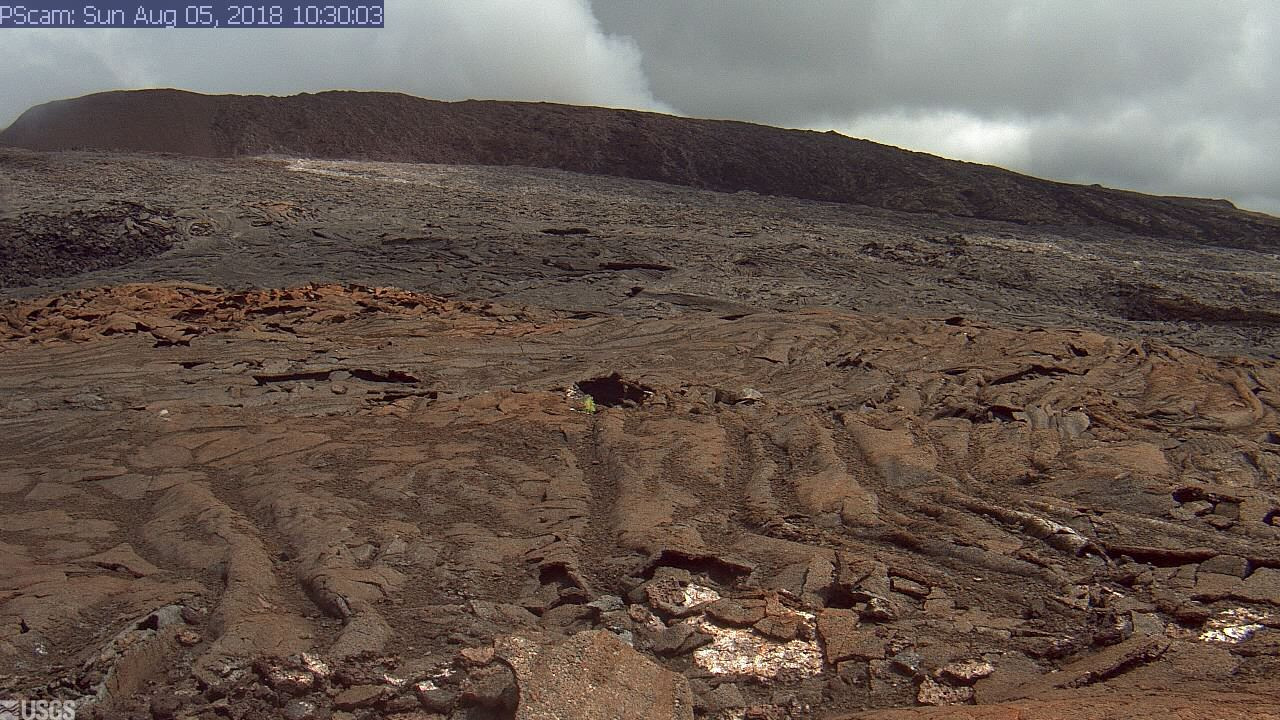 Changes are also being seen on the middle East Rift Zone. “On Friday, gas measurements of the Puʻu ʻŌʻō plume indicated an emission rate of over 1,000 tons/day of SO2, the highest rate from this vent in several years,” USGS said. “Readers may recall that a white plume has been observed issuing from Puʻu ʻŌʻō over the past several weeks. HVO will attempt to overfly Puʻu ʻŌʻō as soon as possible to evaluate any other significant changes within and around the vent.” 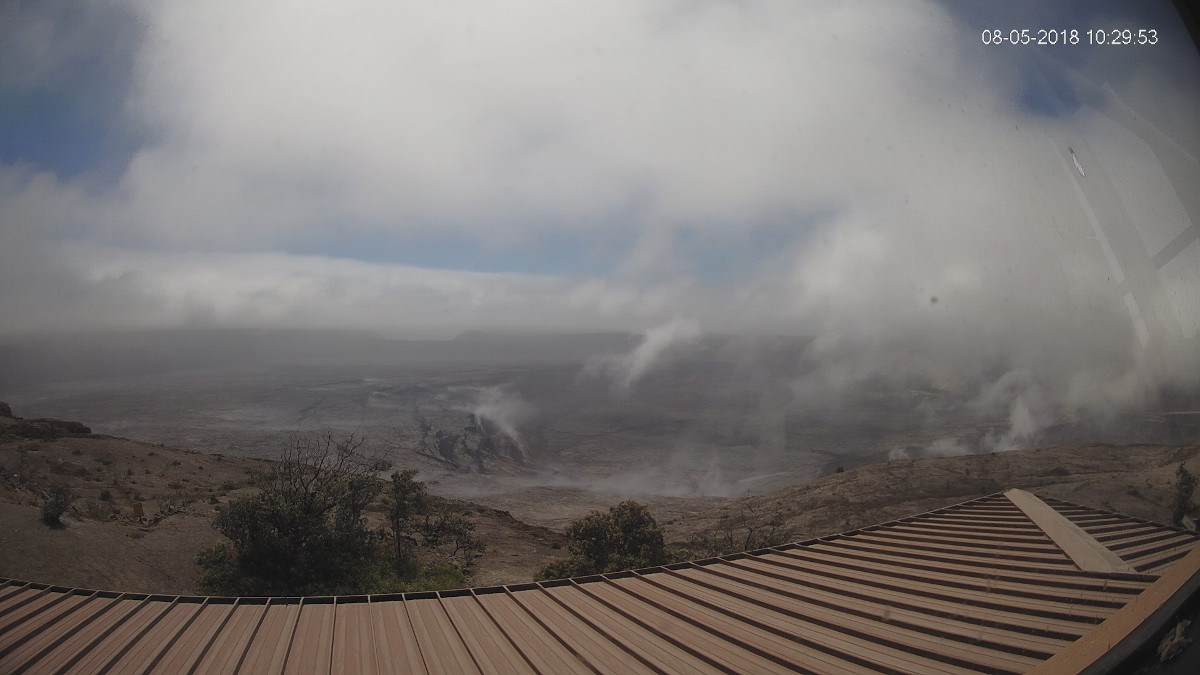 webcam image of the Kilauea summit taken this morning

Scientists also made these observations at the Kīlauea Volcano summit”

The volcano’s summit remains relatively quiet, representing a significant departure from the pattern of seismicity and deformation over the past several months. The most recent collapse event occurred three day ago, at 11:55 a.m. HST August 2. Rates of earthquakes began to increase soon after as has been typical leading to the next collapse event, but yesterday the rate decreased to a low level without a collapse event. Low rates of seismicity continue today. The rate of deformation at the summit as measured by tiltmeter and GPS instruments is also remains much reduced.

“Summit and LERZ changes considered together imply that the rate of magma leaving the summit to feed the Lower East Rift Zone eruption has decreased,” the USGS Hawaiian Volcano Observatory stated. “How long this condition will persist is unknown. It is possible that outflow will pick up again, resulting in renewed summit area deflation leading to another collapse event and renewed eruption vigor on the LERZ.”