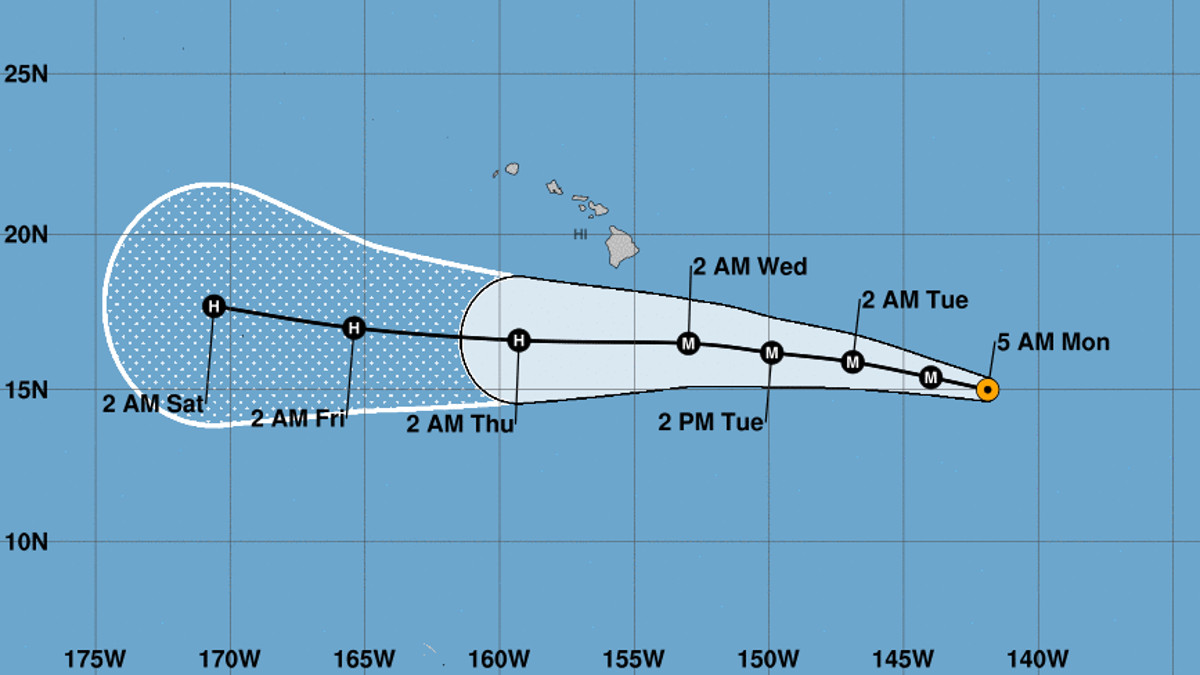 HAWAII ISLAND - While the official forecast track continues to lie to the south of the Hawaiian islands, only a slight deviation to the north of the forecast track would significantly increase potential impacts to the state of Hawaii.

(BIVN) – At 5 a.m. HST, the center of Hurricane Hector was located 930 miles east southeast of Hilo, and moving toward the west near 15 mph. “A motion toward the west-northwest at an increased forward speed is expected through Tuesday, followed by a westward motion Tuesday night through Friday,” the National Weather Service Central Pacific Hurricane Center in Honolulu reported.

“While the official forecast track continues to lie to the south of the Hawaiian islands, only a slight deviation to the north of the forecast track would significantly increase potential impacts to the state of Hawaii,” the NWS wrote this morning. “Now is a good time for everyone in the Hawaiian Islands to ensure that they have their hurricane plan in place.”

“Hawaii County departments along with state and federal agencies are monitoring the storm,” said a morning message from Hawaii County Civil Defense. “You will informed of conditions that affect your safety. Do take this time to prepare for possible hurricane impacts and stay alert for continued Civil Defense messages.” 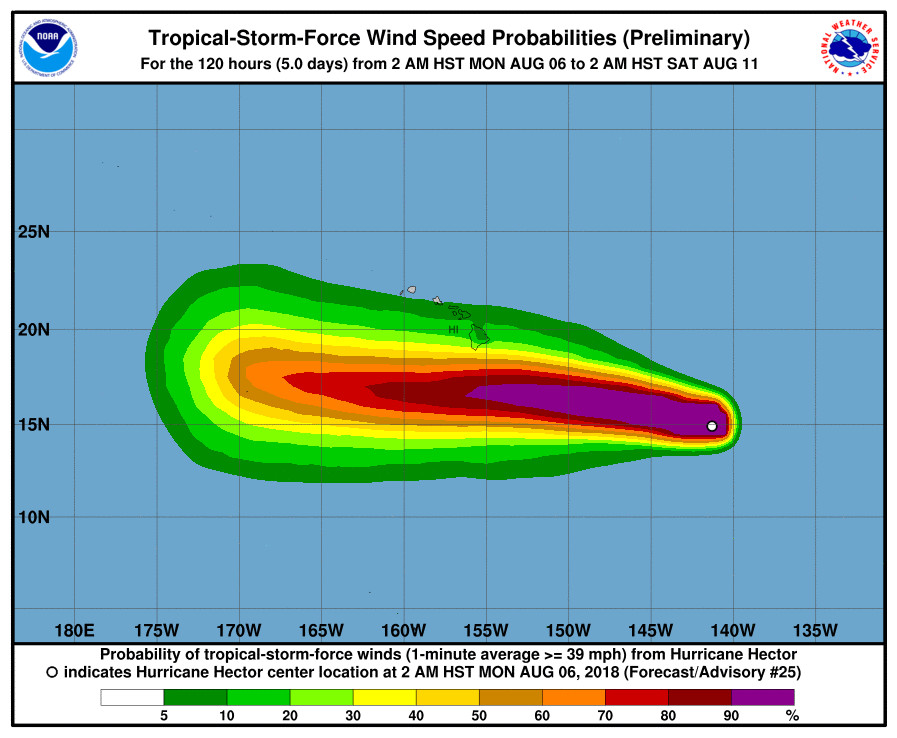 From the Central Pacific Hurricane Center at 5 a.m. HST:

The satellite presentation of Hurricane Hector has improved overnight, with a well defined 10 to 15 nautical mile wide eye surrounded by a large ring of -70 to -80 Celsius cloud tops. The latest subjective Dvorak current intensity estimates from SAB and JTWC came in at 6.5 (127 knots), while PHFO came in at 6.0 (115 knots). The latest estimate using the Advanced Dvorak technique from UW-CIMSS yielded 6.8 (135 knots). Given that Hector’s satellite presentation has improved since the previous advisory, we have elected to raise the initial intensity to 125 knots which correlates well with a blend of the available intensity estimates. Hector has continued to track westward at about the same speed as the previous advisory, so the initial motion remains 280/13 knots.

The latest model guidance remains tightly clustered and brings Hector just north of due west over the next 36 to 48 hours due to a weakness in the subtropical ridge to the northeast of the Hawaiian Islands. Beyond 48 hours, the subtropical ridge is forecast to build to the north of the Hawaiian Island chain, and this should steer Hector due westward from 48 to 96 hours, before bending back to the west-northwest beyond 96 hours as a digging upper level trough between 170W and the International Date Line begins to erode the western portion of the subtropical ridge. The new official forecast track is very close to the model consensus and nearly identical to the previous official track forecast.

Hector will remain in a favorable low shear environment through the forecast period, but there are some factors that should lead to gradual weakening over the next few days. The hurricane will be traveling over marginal sea surface temperatures around 27C through Wednesday, before the SSTs increase slightly to around 28C to the south of the Hawaiian Islands Wednesday night through Friday. Additionally and likely more importantly, very dry mid-level air will begin to surround the storm beginning later today or tonight, and this is expected to lead to a slow and gradual weakening of the system through Wednesday night. The intensity of Hector is then expected to level off Wednesday night through Friday as it encounters the higher SSTs, with some indication from the HWRF that re-intensification could occur. The intensity forecast has been adjusted slightly higher than the previous forecast due to both the statistical and dynamical models trending higher and coming into somewhat better agreement. Given the recent better performance of the dynamical guidance in comparison to the statistical guidance, more weight was placed on the dynamical models when preparing the intensity forecast for this advisory package as well.

A couple reconnaissance missions are scheduled to be flown today between 18Z and 00Z, one by the Air Force Reserve 53rd Weather Reconnaissance Squadron which will provide additional important data to assist in future track and intensity forecasts. The other will be a NOAA G4 mission which will sample the environment around Hector, providing valuable data for ingestion into the models. 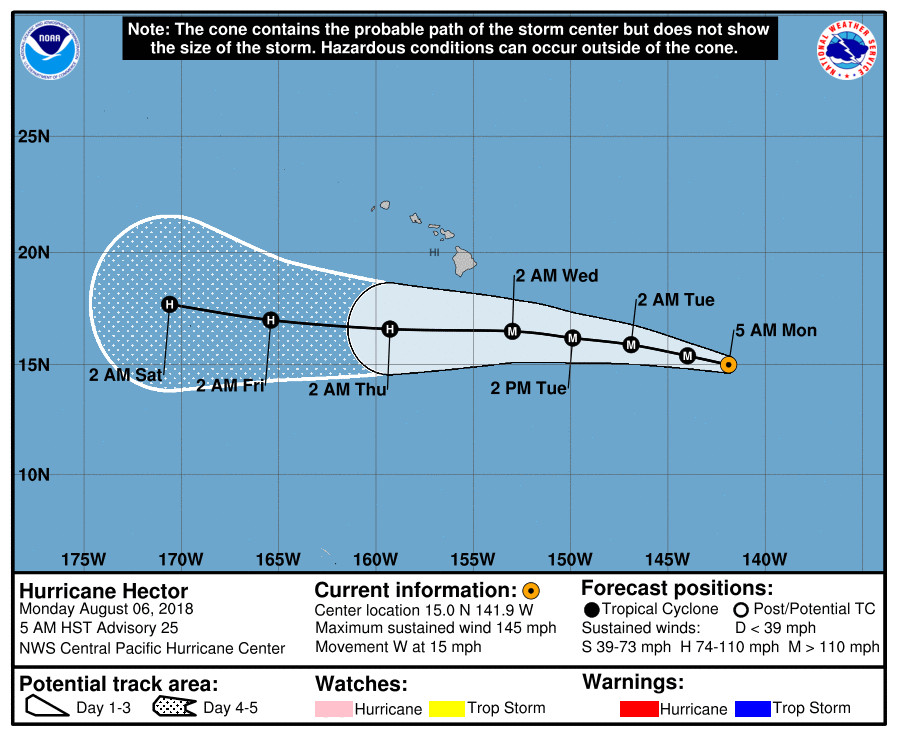 In a National Weather Service discussion posted at 3:56 a.m., the possible local impacts from the storm were discussed, warning that the “average track errors of the hurricane this far out are up to 130 miles on either side of the forecast track.”

“Weather impacts for each island remain highly dependent on the hurricane intensity and track with areas not affected by moisture from Hector remaining in a dry trade wind pattern,” the Honolulu-based forecasters wrote. “Enhanced precipitation activity will develop over the eastern slopes of the Big Island from Wednesday morning into Thursday as deep tropical moisture associated with Hector and stronger trade winds will combine to produce numerous rain showers. Please continue to closely monitor this major hurricane as it moves closer to the state. Tune in to your favorite TV and radio stations, or go online to find the latest official forecasts produced by local Meteorologists from the Central Pacific Hurricane Center at weather.gov/cphc with local weather forecasts available at weather.gov/hawaii updated twice a day.”