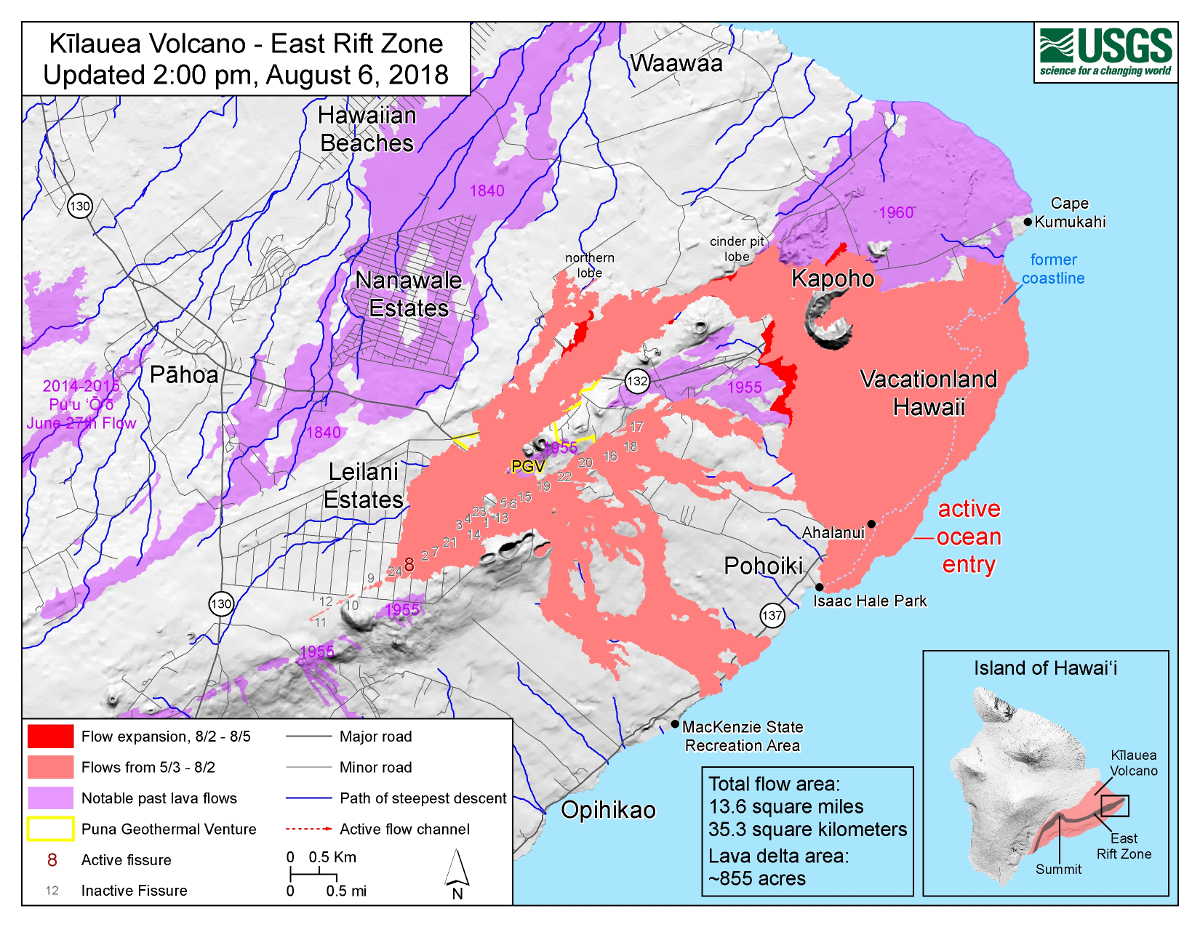 (BIVN) – County emergency officials and federal scientists are keeping an eye on the changes in the Kilauea eruption, both at the summit and on the lower East Rift Zone.

Activity and lava output from fissure 8 remains low. This morning’s overflight crew saw a weak to moderately active bubbling lava lake within the fissure 8 cone, a weak gas plume, and a completely crusted lava channel. Later in the morning, ground crews found the upper channel largely devoid of lava confirming that the channel is empty to at least the vicinity of Kapoho Crater where a short section of spiny active lava in a channel was present. There were small active ooze outs near the coast on the Kapoho Bay and Ahalanui lobes but the laze plume was greatly diminished. Active lava is close to the Pohoiki boat ramp but has not advanced significantly toward it.

The significance of this change is not yet clear and hazardous conditions remain in the area. HVO field crews and the UAS team will monitor activity throughout the day and overnight.

It is common for eruptions to wax and wane or pause completely. A return to high levels of lava discharge or new outbreaks in the area of active fissures could occur at any time.

On Friday, gas measurements of the Puʻu ʻŌʻō plume indicated an emission rate of over 1,000 tons/day of SO2, the highest rate from this vent in several years. Readers may recall that a white plume has been observed issuing from Puʻu ʻŌʻō over the past several weeks. From this morning’s overflight, observers confirmed that increased gas and steam are coming from the crater but that temperatures do not seem significantly higher than on previous visits. No active lava was observed.

The volcano’s summit remains quiet following the most recent collapse event four days ago (11:55 a.m. HST August 4). This continues a significant departure from the pattern of seismicity and deformation over the past several months, with very low rates of seismicity continuing today. The deformation at the summit as measured by tiltmeter and GPS instruments has virtually stopped.

Summit and LERZ changes considered together imply that the rate of magma leaving the summit to feed the Lower East Rift Zone eruption has decreased. How long this condition will persist is unknown. It is possible that outflow will pick up again, resulting in renewed summit area deflation leading to another collapse event and renewed eruption vigor on the LERZ.

The Hawaiian Volcano Observatory reports that eruptive activity has decreased at the Kilauea summit and lower east rift zone at fissure 8. Seismic activity is low with few felt earthquakes at the summit. Weak activity was reported in the fissure 8 cone with no activity seen in the upper channel. At the ocean entry, mild incandescence was reported.

HVO continues to monitor Kilauea for signs of reactivation of activity. Several overflights are scheduled throughout the day to visually monitor the volcano.

Do not access the flow field due to extreme hazard. Lava eruption could resume at any time.
This will be our last afternoon eruption update until there is a significant change in eruptive activity. We will continue with the morning updates until further notice.

The next Hurricane Hector update will be after the National Weather Service update at 5 pm.