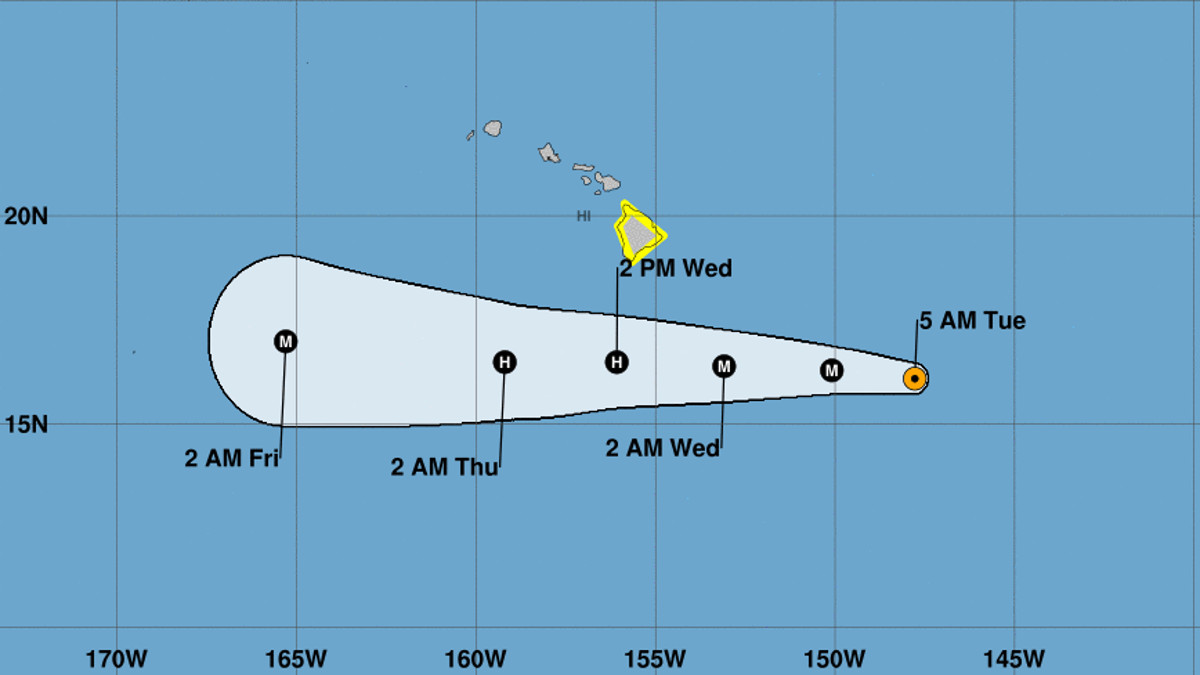 HAWAII ISLAND - A Tropical Storm Watch, and now a High Surf Warning, remain in effect for Hawaii Island as Hector is still a major hurricane.

(BIVN) – The powerful Hurricane Hector is expected to pass approximately 165 miles south of the Big Island on Wednesday, yet emergency officials continue to warn that only a small deviation to the north of the forecast track could bring tropical storm force winds to the Big Island later tonight or on Wednesday.

A Tropical Storm Watch is in effect for the Big Island. Hurricane Hector is about 540 miles east-southeast of Hilo. Hector is packing sustained winds near 130 mph with higher gusts, making it a category 4 hurricane on the Saffir-Simpson Hurricane Wind Scale. Some weakening is forecast during the next 48 hours. 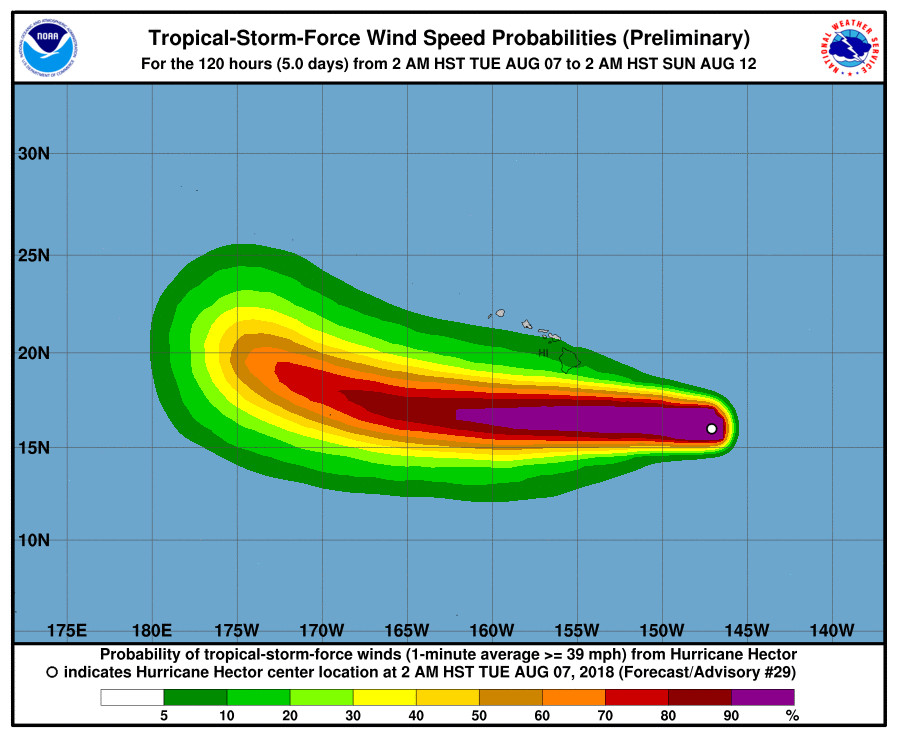 “Surf along east facing shores is already building and will peak later today and tonight, at 12 to 15 feet for the Big Island mainly for the Puna and Kau districts with 6 to 10 feet surf for eastern Maui,” said the National Weather Service as a High Surf Warning was issued for Hawaii Island.

“Enhanced rainfall from deep tropical moisture surrounding Hector will affect the Puna and Kau districts of the Big Island as the hurricane passes by south of the state on Wednesday and Thursday,” forecasters said. “Rain showers may be locally heavy at times, particularly over east to southeast facing slopes.” 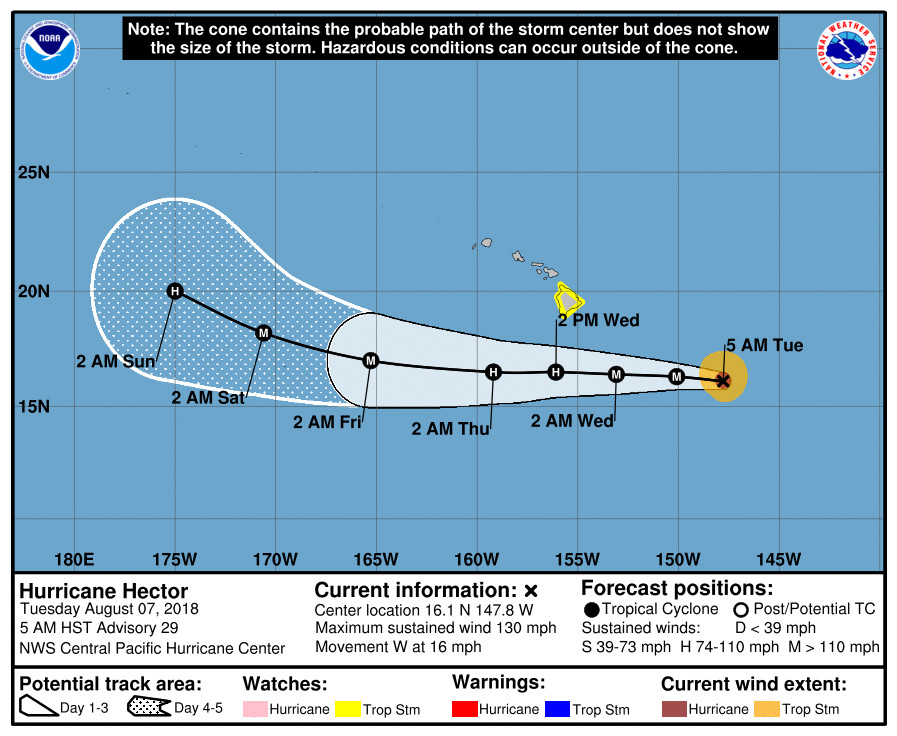 The satellite presentation of Hector has degraded slightly since the previous advisory, with cooling temperatures noted within the slowly shrinking eye of the hurricane. Aircraft reconnaissance data from the mission flown between 06Z and 12Z by the Air Force Reserve 53rd Weather Reconnaissance Squadron indicated that Hector was weakening, confirming what was being seen in satellite imagery. The last report from the overnight mission measured a surface wind of 107 knots in the northwest eye wall around 1030Z, on their way back to Honolulu. The various subjective Dvorak current intensity estimates from PHFO, SAB and JTWC came in at 6.5 (127 knots), while the latest estimate using the Advanced Dvorak technique from UW-CIMSS yielded 6.2 (120 knots). The initial intensity was weighted equally between the various satellite estimates and the observational data from the aircraft, taking into account that the aircraft could have very easily under sampled the strongest winds within the hurricane. As a result, the initial intensity with this advisory is set at 115 knots with a motion remaining locked in at 280/14 knots.

The latest model guidance remains tightly clustered and brings Hector just north of due west today. A building subtropical ridge to the north of the Hawaiian Islands should then steer Hector nearly due westward tonight through Thursday night. The system should begin to bend back toward the west-northwest or northwest Friday through Saturday as it rounds the southwest periphery of the subtropical ridge and begins to be influenced by an upper level trough setting up between 170W and the International Date Line. The new official forecast track lies virtually on top of the previous track and is very close to the model consensus. The forecast track brings the center of Hector roughly 165 miles south of the Big Island as a strong category 2 hurricane on Wednesday, and given the proximity of the storm to the island, the Tropical Storm Watch remains in effect.

Hector will remain in a favorable low shear environment through Friday, before west-southwesterly shear increases on Saturday. There are a couple factors that should lead to some gradual weakening over the next couple of days however. The hurricane will be traveling over marginal sea surface temperatures around 27C through Wednesday night, before the SSTs increase slightly to around 28C to the south and west of the Hawaiian Islands Thursday through Saturday. Additionally, very dry mid-level air will continue to surround the storm through the forecast period, and this is should lead to gradual weakening of the system over the next couple days. The intensity of Hector is then expected to level off and perhaps increase slightly by the 72 and 96 hour forecast points Thursday through Friday as it encounters the higher SSTs. Some weakening should then ensue on Saturday as Hector begins to feel increasing west-southwesterly shear as it approaches the upper trough between 170W and the Date Line. The intensity forecast has been adjusted slightly downward today through Wednesday night, then is nearly the same as the previous forecast from Thursday through Saturday. This is in line with the latest trends of the statistical and dynamical models, but with more weight given to the dynamical models which have been better performers recently.