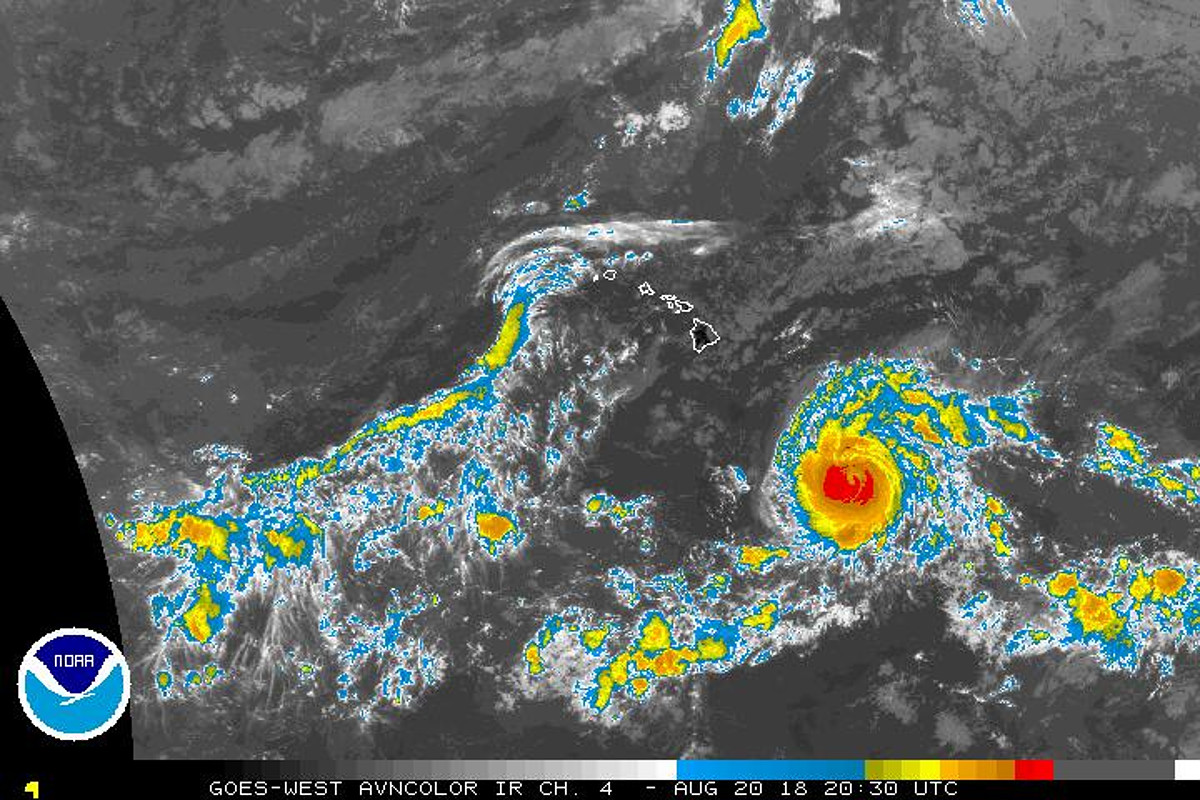 11 am: Back To Category Four Hurricane, Lane Could Track Towards Hawaii

HAWAII ISLAND - Beyond 48 hours, the forecast becomes quite challenging, hurricane forecasters say, as model guidance shows increasing spread in the expected direction of the storm. 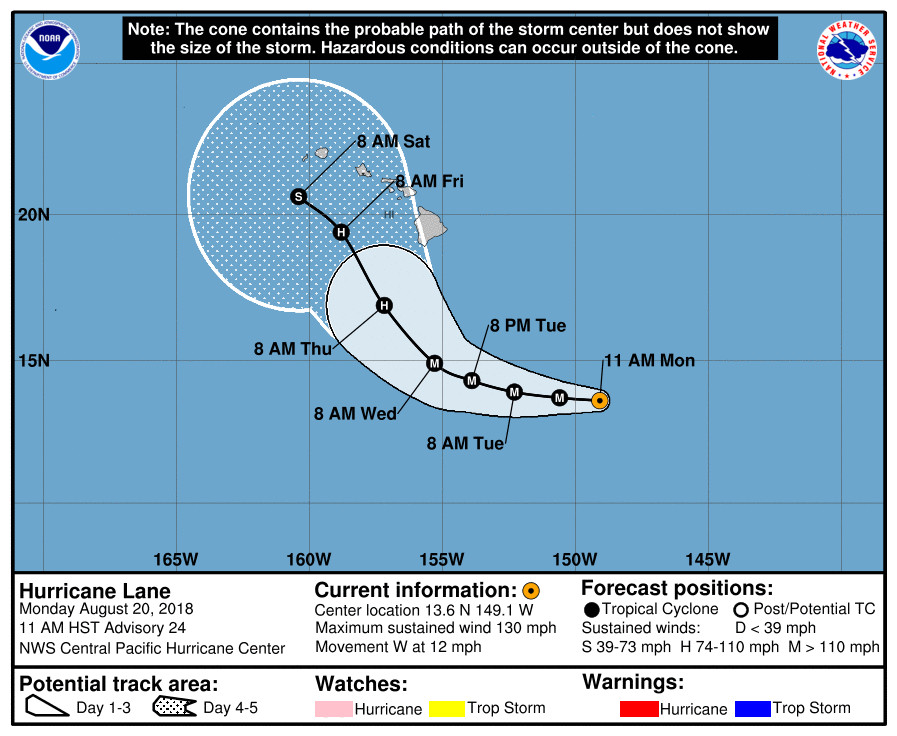 (BIVN) – Residents in Hawai‘i “should continue to closely monitor the progress of Lane” as the storm may pose a direct threat to the islands later this week.

The latest forecast track shows Hurricane Lane tracking closer to the state, the National Weather Service in Honolulu stated. “If this track holds, the potential impacts on our islands weather could include an increase in wind speeds due to a tightened pressure gradient, between high pressure north of the state and Lane traversing to our south,” the forecasters said. “Also moisture associated with Lane would likely bring an increase in shower activity over the Big Island Wednesday, mainly east and southeast and then eventually spreading up the island chain through the remainder of the week.”

Lane has been bumped back up to a powerful category 4 hurricane on the Saffir-Simpson Hurricane Wind Scale, as maximum sustained winds are near 130 mph (215 km/h) with higher gusts. “Little change in strength is expected for the next day or so, with a weakening trend expected to begin on Tuesday,” the Central Pacific Hurricane Center said at 11 a.m. on Monday. “Heavy rainfall and possible flooding associated with Lane is likely to affect portions of the state later this week,” the storm forecasters wrote. 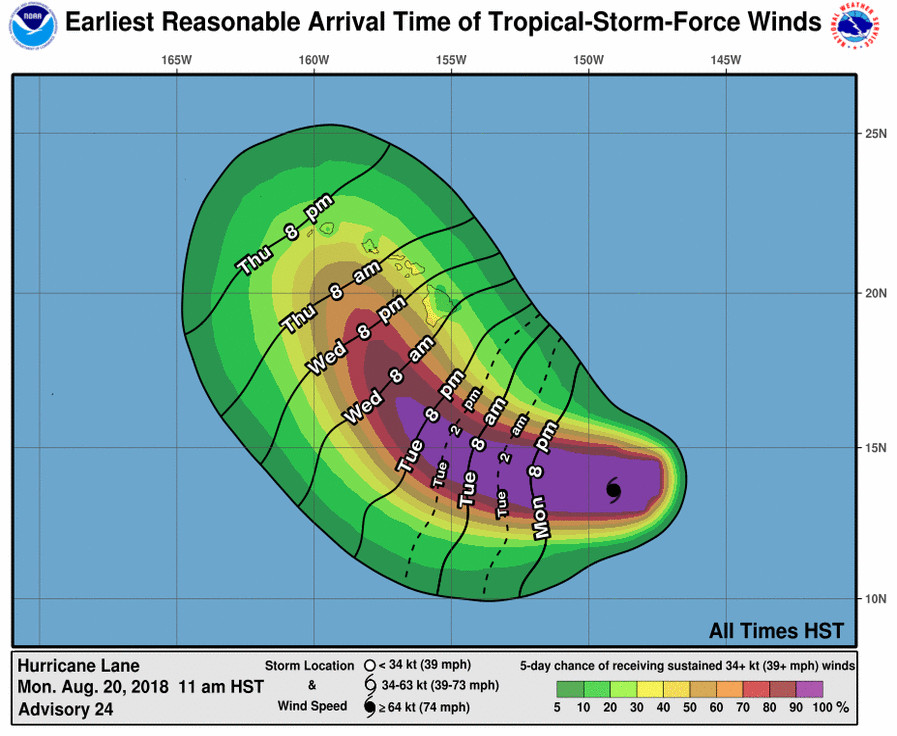 At 11 a.m., the eye of Hurricane Lane was located by U.S. Air Force Reserve and NOAA Hurricane Hunters near latitude 13.6 North, longitude 149.1 West, 580 miles southeast of Hilo. “Lane is moving toward the west near 12 mph (19 km/h),” the Central Pacific Hurricane Center said. “A gradual turn toward the northwest and a slowing of forward motion are expected over the next few days.”

With increasing spread in model guidance, there is a lot of uncertainty in where Hurricane Lane will end up. “It should be noted that in this situation, forecast confidence is lower than normal,” the National Weather Service’s CPHC said. “A turn back toward the west-northwest is expected toward the end of the forecast period as strong wind shear begins to impact Lane, but this is also a rather low confidence scenario.”

“With such a complex forecast scenario, it is especially important not to focus on the exact forecast track and intensity and be ready for changes to both,” the forecasters said.

A High Surf Advisory is already in effect for east facing shores of the Big Island.

Hawaii County Civil Defense says a handful of beach park closures are already in effect. Whittington, Punaluu, and Milolii Beach Parks are closed. All pavilion and camping permits for these three parks have been cancelled.

“Take this time to assure that family and business emergency plans are up to date,” emergency officials stated.

The National Weather Service goes into greater detail in its 11 a.m. HST discussion:

Air Force Reserve Hurricane Hunters found a maximum flight level wind of 121 kt, and the NOAA Hurricane Hunters found maximum SFMR wind of 113 kt earlier on the northwest quadrant. The 15 to 20 nm diameter eye had also temporarily become more distinct over the past 6 to 8 hours, and this was the justifiation for raising the current intensity slightly to 115 kt. This is somewhat higher than the 18z satellite based estimates were showing. The eye has since started to become less distinct once again in satellite imagery.

The initial motion is 280/10, slightly slower than the previous advisory. Lane is marching toward the west on the southern flank of a large subtropical ridge. In the near term, the track guidance is in excellent agreement. This motion is expected to gradually turn more toward the west-northwest, and then finally northwest over the next few days as the ridge weakens and erodes. Beyond 48 hours, the forecast becomes quite challenging. The guidance shows increasing spread due to noteworthy differences in the handling of the strength of the ridge to the east and southeast of the cyclone. The GFS remains on the far right side of the guidance with a harder right turn starting around 72 hours, and the ECMWF shows a more gentle curve. The consensus guidance remains split down the middle of these two camps and did not change much from the previous advisory. The forecast track at 96 hours was nudged slightly eastward to better agree with the consensus guidance, but it should be noted that in this situation, forecast confidence is lower than normal. A turn back toward the west-northwest is expected toward the end of the forecast period as strong wind shear begins to impact Lane, but this is also a rather low confidence scenario.

Lane is expected to remain over 28C sea surface temperatures in the short term in a weak to moderate shear environment that should allow the hurricane to maintain intensity. After a day or two, the models show increasing shear beginning to work on the circulation and weaken the system. However, there are some differences as to when that will begin. The intensity forecast shows a slow weakening trend beginning in the 24 to 36 hour time frame in good agreement with the intensity consensus guidance. Once shear increases in the 48 to 72 hour time frame, a somewhat faster weakening trend is anticipated which should continue through the rest of the forecast period.

Interests in the main Hawaiian Islands, as well as the northwestern Hawaiian Islands, should continue to monitor the progress of Lane this week. With such a complex forecast scenario, it is especially important not to focus on the exact forecast track and intensity and be ready for changes to both.