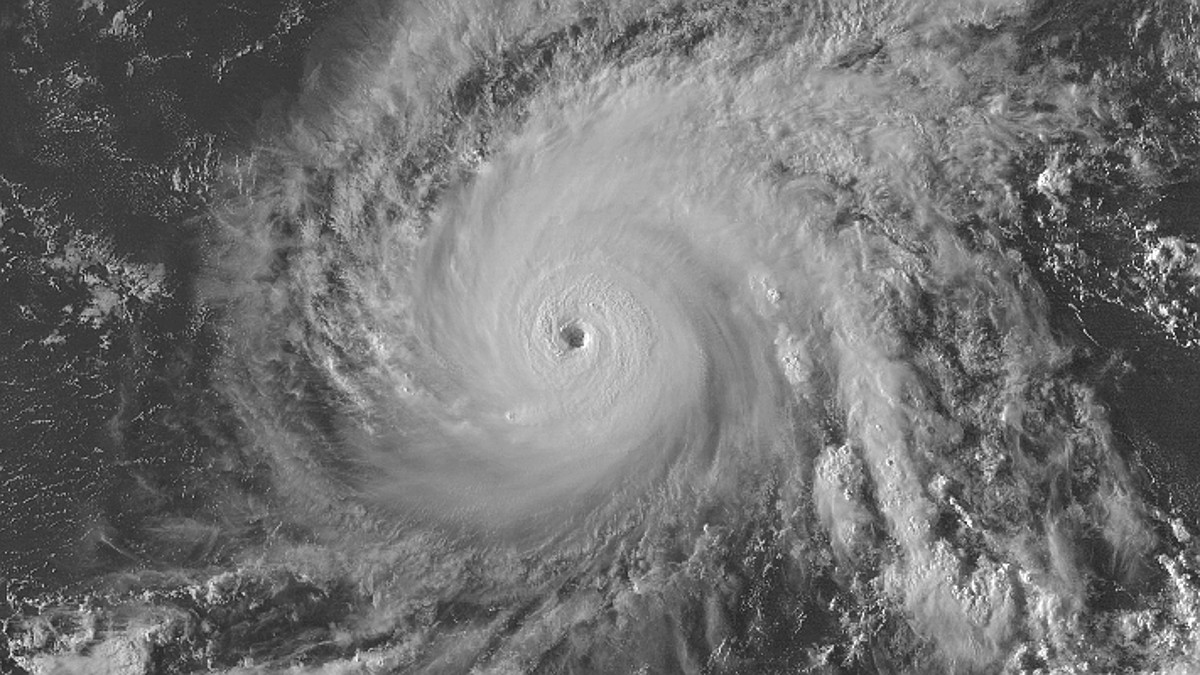 HAWAII ISLAND - A "larger than normal uncertainty in the future track of Lane necessitates close attention by interests in the Hawaiian Islands" over the next few days, weather forecasters say.


(BIVN) – Hurricane Lane – a major, category 4 hurricane with maximum sustained winds blowing at 130 mph – is presenting a challenge to weather forecasters, who are trying to figure where the storm will be 48 hours from now as it nears Hawaii.

“The models are struggling with a couple of factors that make the track forecast beyond 48 hours very challenging,” the National Weather Service’s Central Pacific Hurricane Center wrote at 5 p.m. on Monday. “The rather large uncertainty in the track forecast necessitates close attention by interests in the Hawaiian Islands over the next couple of days. It is important to not focus your attention on the exact forecast track, and be prepared for changes to the forecast.” 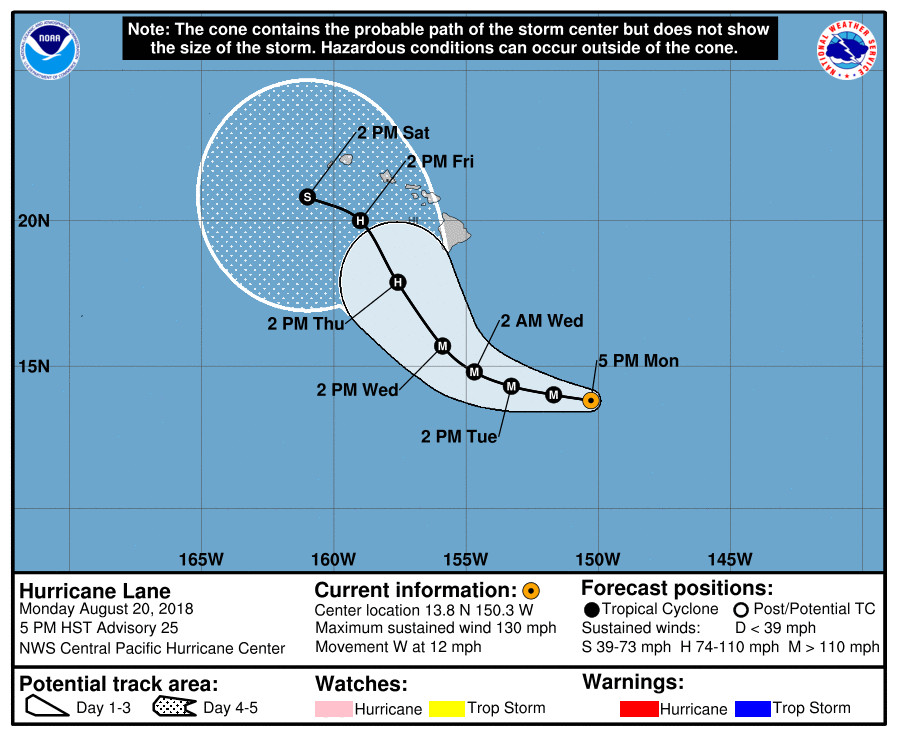 Hurricane Lane, presently 515 miles southeast of Hilo, is expected to move toward the west near 12 mph for the next day or so, steered by a subtropical ridge to the north. “However, changes in the steering pattern are expected relatively soon,” forecasters say, “as the ridge weakens and leaves a weakness to the north of Lane. This will allow the tropical cyclone to begin gaining latitude a little more quickly by 48 hours.”

“Weak to moderate southwesterly shear and sea surface temperatures near 28C are sufficient to allow Lane to maintain intensity for the next 24 hours or so,” the Central Pacific Hurricane Center says. “Some fluctuations in intensity are possible due to difficult to forecast eyewall replacement cycles.” Increasing shear will lead to a gradual weakening trend at first, forecasters say, “with more rapid weakening expected beyond 72 hours as Lane approaches stronger winds aloft from a subtropical jet stream.” 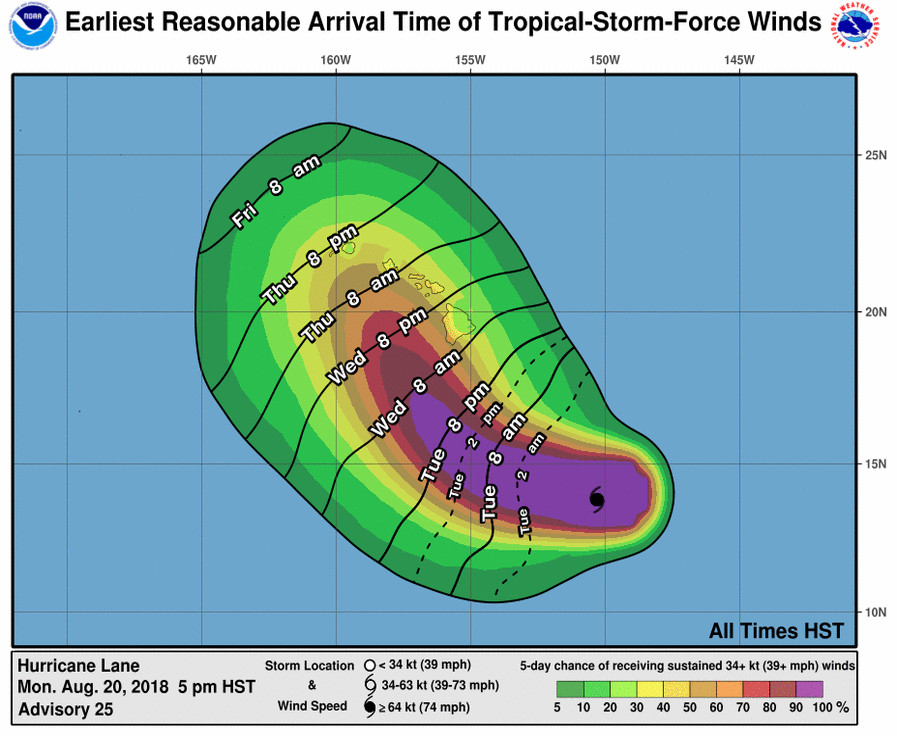 Large swells generated by Lane are expected to impact the Hawaiian Islands this week. A High Surf Advisory is already in effect for east facing shores. Heavy rainfall and possible flooding could also affect portions of the state beginning later Wednesday.

The U.S. Coast Guard Captain of the Port set port condition X-RAY for the Big Island ports (Hilo and Kawaihae) as of 11 a.m. Monday in advance of Hurricane Lane. The readiness condition consists of winds above 39 mph expected within 48 hours.

“All pleasure craft shall seek sheltered waters,” the U.S. Coast Guard stated. “The Captain of the Port is directing action by the maritime and port community. All ocean-going vessels and barges 200 gross tons and above, without an approved application to remain in port, shall make preparations to depart port before the setting of port condition ZULU. If and when the Captain of the Port sets port condition ZULU, meaning sustained gale force winds are anticipated within 12 hours, all activity will be suspended, and the ports will close until the storm has passed and damage assessment surveys are completed.”

UPDATE: Today, Hawaii County officials closed Whittington and Punaluu Beach Parks. (The closure of Milolii Beach Park, announced earlier in the day, was not mentioned in the 5 p.m. civil defense message). All pavilion and camping permits for these parks have been cancelled. 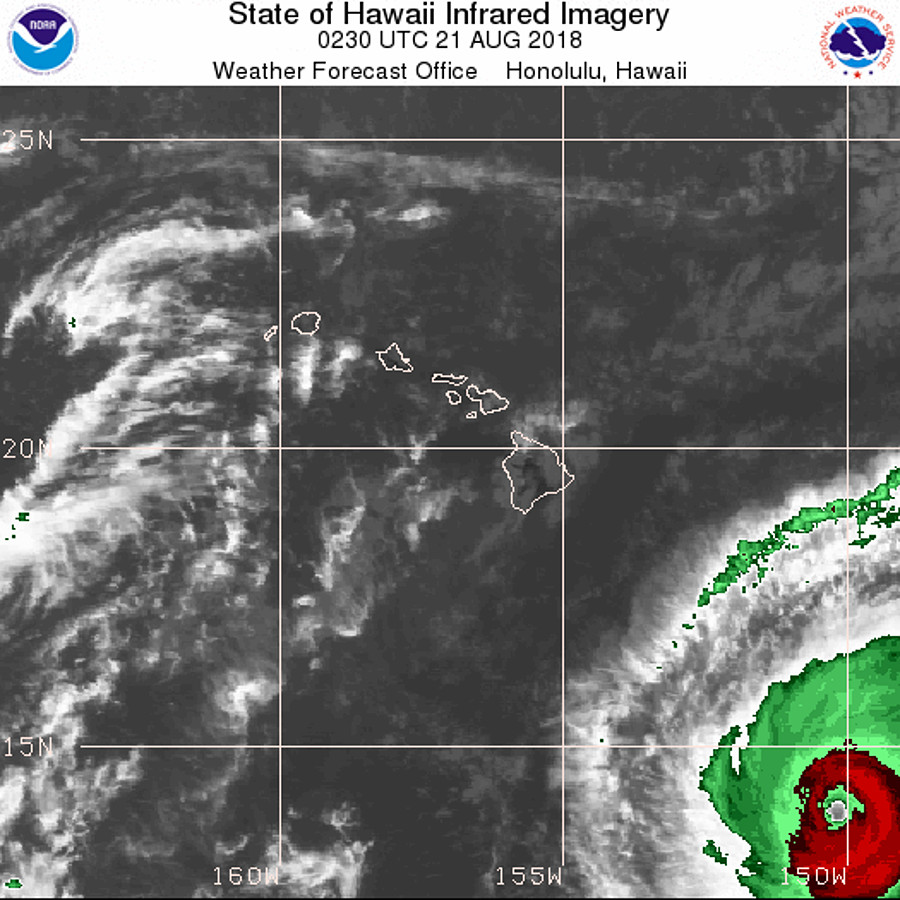 In its 5 p.m. discussion, the NWS Central Pacific Hurricane Center detailed the factors making the forecast so difficult:

One is the evolution of a new ridge which develops to the east and southeast of Lane, and the other is the effect of gradually increasing shear. The ECMWF is stronger with the ridge, and starts shearing the system sooner, so the track is on the left side of the guidance envelope. The GFS and NAVGEM are quite a bit weaker with the ridge, and keep Lane away from the westerly shear longer. There do not appear to be any clear signals at this point to suggest which track to favor, and so we continue to follow the consensus guidance which is down the middle of an uncomfortably large guidance envelope. A turn more toward the west is expected toward the end of the period as Lane is expected to be decoupled and move as a shallower system in the trades.