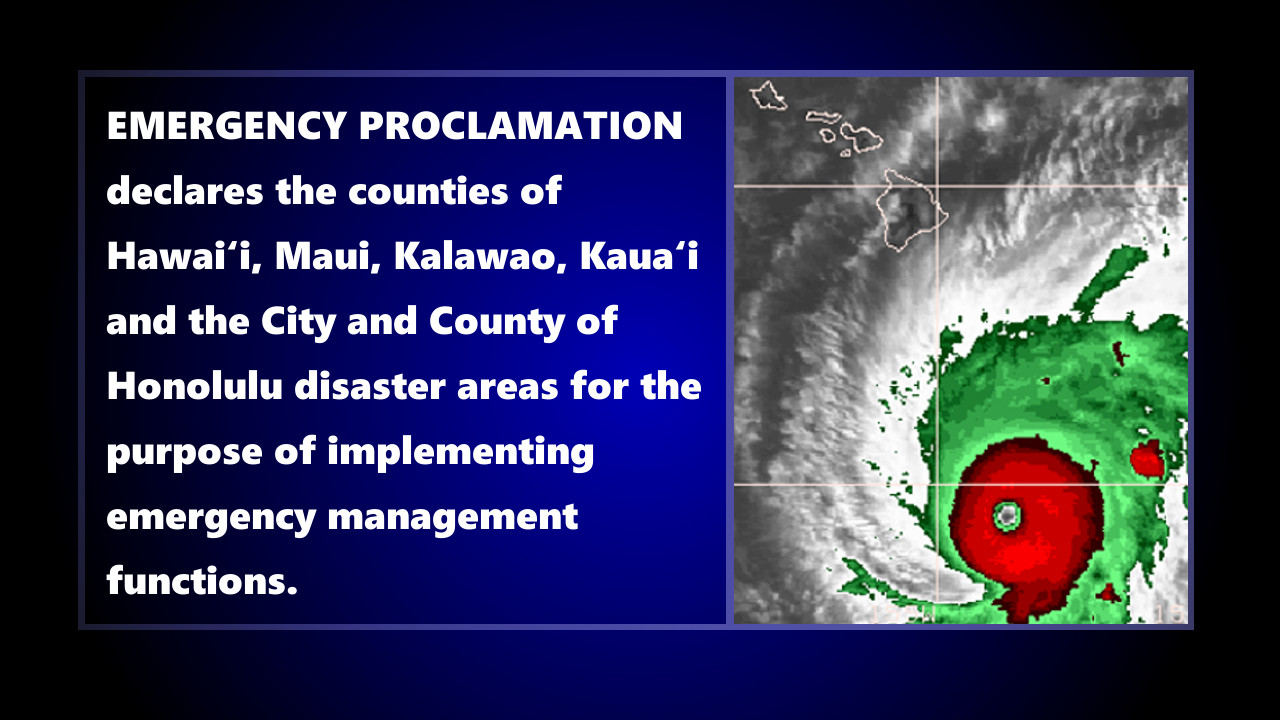 HAWAII ISLAND - All public and charter schools and Hawaii State Department of Education (HIDOE) offices on Hawaii Island and in Maui County will be closed Wednesday, Aug. 22, until further notice.

(BIVN) – Hawai‘i Governor David Ige signed an emergency proclamation today, declaring counties of Hawai‘i, Maui, Kalawao, Kaua‘i and the City and County of Honolulu disaster areas for the purpose of implementing emergency management functions. The proclamation also authorizes the expenditure of state monies as appropriated for the speedy and efficient relief of damages, losses, and suffering resulting from Hurricane Lane.

“This emergency proclamation allows us to line up services and necessary resources prior to the event so that we can keep our communities safe and running as efficiently as possible,” said Gov. Ige. “Hurricane Lane is not a well-behaved hurricane. I’ve not seen such dramatic changes in the forecast track as I’ve seen with this storm. I urge our residents and visitors to take this threat seriously and prepare for a significant impact.”

Gov. Ige granted administrative leave for non-essential state employees in Hawai‘i and Maui counties, as the state prepares for severe weather conditions resulting from Hurricane Lane. State offices on Hawai‘i Island and Maui will be closed from Wednesday, Aug. 22, 2018 through Friday, Aug. 24, 2018.

All public schools and Hawaii State Department of Education (HIDOE) offices on Hawai‘i Island and in Maui County will be closed Wednesday, Aug. 22, until further notice. Also effective Wednesday, all after-school activities and programs including interscholastic athletic events and After-School Plus (A+) Programs are canceled statewide for the remainder of the week. HIDOE says this will allow partner emergency agencies and organizations to stage evacuation shelters at designated schools. All school-related interisland travel this week is canceled as well.

“We appreciate the support and guidance from our emergency management partners as we work together to ensure the safety of our students, staff and school communities,” said Deputy Superintendent Phyllis Unebasami. “As with any emergency-type situation, we are striving to balance the need for safety with our overall commitment to provide students and families with every sense of normalcy.”

Kamehameha Schools will close campuses, preschools and offices on Hawaiʻi Island, Maui and Molokaʻi on Wednesday in anticipation of Hurricane Lane.

The U.S. Coast Guard Captain of the Port set port condition YANKEE for the Big Island ports (Hilo and Kawaihae) in advance of Hurricane Lane. At Port Heavy Weather Condition YANKEE, the WARNING condition consists of winds above 39 mph expected within 24 hours. “All pleasure craft shall seek sheltered waters,” the USCG said. “The Captain of the Port is directing action by the maritime and port community. All ocean-going vessels and barges 200 gross tons and above, without an approved application to remain in port, shall make preparations to depart port before the setting of port condition ZULU.”

Hawai‘i County Civil Defense says all county beach parks, from South Point north to Kohala, will be closed until further notice. All pavilion and camping permits for these parks have been cancelled.

South Point Road from the Kamaoa Road junction to South Point is closed to all through traffic; the road is open to local residents only.

All University of Hawaii campuses and non-essential university operations on Hawaii Island, Maui, Molokai and Lanai will be closed starting tomorrow morning until further notice.

Division of Forestry and Wildlife (DOFAW)

In a media release, DLNR Chair Suzanne Case said, “Our primary concern is public health and safety. While we realize closures and cancellations may be an inconvenience this is a powerful storm that could have dramatic and damaging impacts across the state. We want to be prepared to safeguard people’s safety using state resources as well as to protect those resources as much as possible in advance of Hurricane Lane.”

We will update this list when more closures are announced.