(BIVN) – A Hurricane Warning remains in effect for Hawaii Island as powerful Hurricane Lane continues to move west northwest towards the state.

The storm weakened a bit overnight. Maximum sustained winds are now 155 mph, bringing Lane back down to a strong category 4 hurricane on the Saffir-Simpson Hurricane Wind Scale. Some weakening is forecast during the next 48 hours, the National Weather Service’s Central Pacific Hurricane Center says, but Lane is forecast to remain a dangerous hurricane as it draws closer to the Hawaiian Islands. 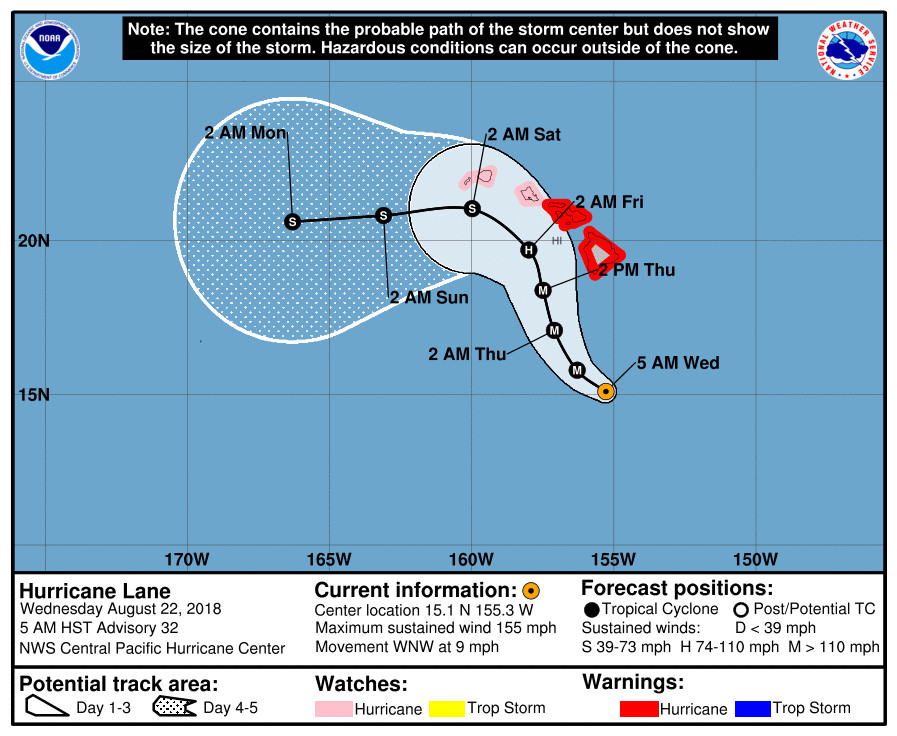 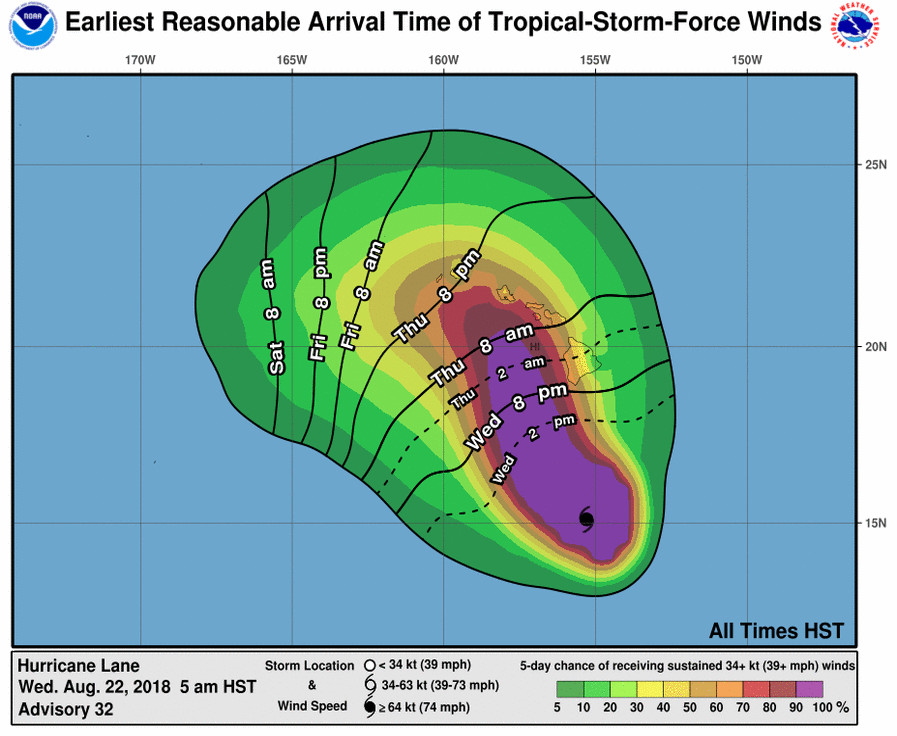 “Excessive rainfall associated with Lane is expected to affect portions of the Hawaiian Islands from late today into the weekend, leading to flash flooding and landslides,” the National Weather Service says. “Lane is expected to produce total rain accumulations of 10 to 15 inches with isolated amounts greater than 20 inches over the Hawaiian Islands.”

“Large swells generated by Lane will impact the Hawaiian Islands, beginning this morning on the Big Island, spreading across the remainder of the island chain on today,” forecaster say. “These swells will produce large and potentially damaging surf along exposed west, south and east facing shorelines.”

Lane has started to turn more towards the northwest as forecast by the Central Pacific Hurricane Center (CPHC). The forecast track for Lane continues on a northwest path today before turning more north-northwest on Thursday. Lane’s forecast track will increase the threat for hurricane force winds over the Big Island and Maui County over the next 24 to 36 hours. The Hurricane Warning was expanded this morning to include both Hawaii and Maui Counties.

Deep tropical moisture surrounding Lane will also drift northward ahead of the hurricane through the weekend. Extreme moisture levels surrounding Lane will create an unstable environment with muggy and humid weather conditions along with frequent showers. Heavier rain shower bands will develop with some thunderstorm activity as the extreme moisture interacts with mountainous terrain on each island. These conditions will likely lead to periods of hazardous flash flooding threatening all islands. Hence, a Flash Flood Watch remains in effect for the entire state of Hawaii through Saturday.

The combination of a deep moist unstable layer and strong low level wind shear along and to the east of the track of Lane will make tornadoes and large waterspouts a distinct possibility in the rainbands across the right semicircle of the hurricane. These continue to be included in the TCV and HLS products as an elevated threat from Oahu to the Big Island. Will be able to better refine the threat as Lane approaches.

It’s not possible to know which islands will see the worst storm effects right now due to the close proximity of the hurricane track to the Hawaiian Islands and uncertainties in Lane’s track caused by increasing wind shear through the atmosphere as it moves northward. The CPHC forecasts continue to show that all islands are at risk from direct effects from the core of Hurricane Lane. Everyone should take this hurricane very seriously and should prepare accordingly. It’s also important to expect future adjustments to the track and intensity forecast, particularly with the challenging recurvature forecast that Lane is presenting. Prepare for the worst and hope for the best.

Sunday through Tuesday, there remains a considerable amount of uncertainty in the model guidance as to when the deep moisture in the wake of Lane departs the region. The American GFS model continues to show a deep moisture plume lingering over the entire state through the weekend and into the first half of next week. While the European (ECMWF) model shows a large area of drier air moving in with the easterly trade wind flow. We will need to wait to see how fast Lane transits the Hawaiian Islands and watch for the models trending towards a more consistent solution over this time period. 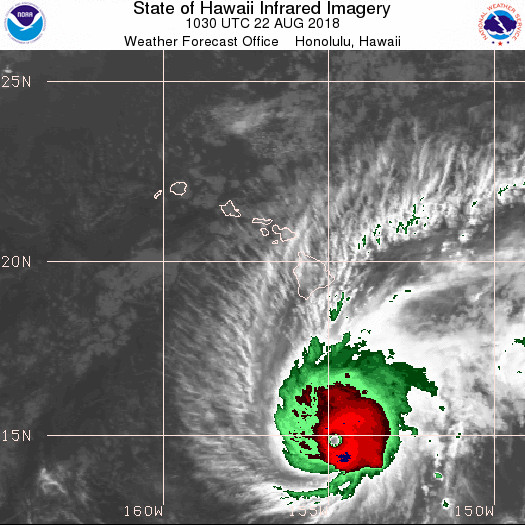 Due to the Hurricane Warning status, Hawaii County Civil Defense said the following closures are in effect:

All other roads are open at this time.

“The Division of Boating and Ocean Recreation (DOBOR) advises all boat owners in unprotected harbors from Milolii to Mahukona to take all measures to secure their vessels. This includes removal, if possible. Complete all actions before nightfall,” civil defense says. “The Department of Education, in coordination with the American Red Cross and Hawaii County Parks and Recreation, have identified shelters in all districts that will be opened if necessary. You will be notified if any of the shelters are opened.”

WHEREAS, the National Weather Service at 5:00 p.m. HST on August 17, 2018 issued Hurricane Lane Advisory Number 17 advising that Hurricane Lane had entered Hawaiian waters and was located at 12.8 North Latitude/141.0 West Longitude or 930 miles south east of Hilo, Hawai‘i as a Category 4 hurricane with maximum sustained winds of 145 mph and;

WHEREAS, the National Weather Service at 5:00 a.m. HST on August 21, 2018 issued Hurricane Lane Advisory Number 27 advising of a Hurricane Watch for the County of Hawai‘i. Hurricane Lane was located at 14.1 North Latitude/152.3 West Longitude or 450 miles south east of Kailua-Kona, Hawai‘i as a Category 4. hurricane with maximum sustained winds of 150 mph and;

WHEREAS, a Hurricane Watch means that possible tropical storm conditions can occur any time within the next 48 hours; and

NOW, THEREFORE, I, HARRY KIM, Mayor of the County of Hawai‘i, do hereby proclaim and declare that a state of emergency exists due threat of imminent disaster on the Hawai‘i Island, effective 7:38 a.m., August 21, 2018, and continuing thereon for 60 days or until further act by this office.

IN WITNESS WHEREOF, I have hereunto set my hand and caused the Seal of the County of Hawai‘i to be affixed. Done this 21st day of August 2018 in Hilo, Hawai‘i.