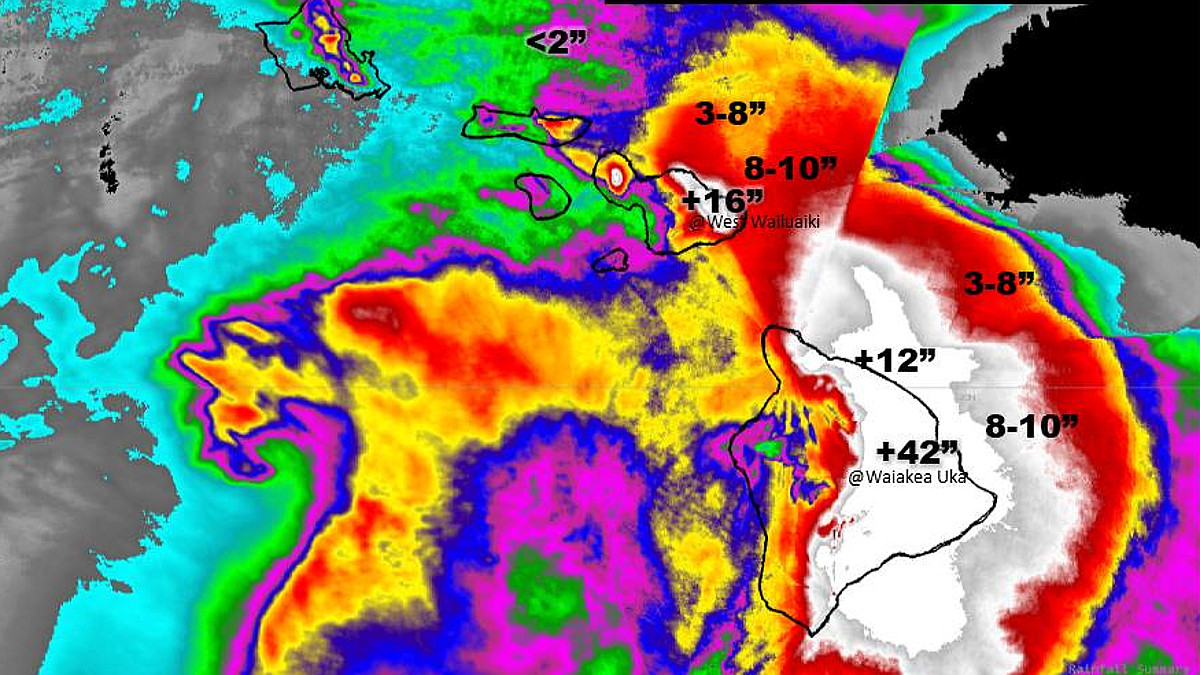 10:24 p.m. by the National Weather Service – A Flood Advisory has been issued for parts of Hawai‘i Island until 1:15 a.m. HST. Forecasters stated:

At 1019 PM HST, radar indicated moderate to locally heavy rain over the South Hilo, Puna and Ka‘u districts. Rainfall rates near one inch per hour are occurring in the lower Puna district, and a large area of moderate rain is moving into the Ka‘u district from Paauau to South Point. Rain is likely to continue across much of the advisory area through the night, and more widespread heavy rains may redevelop at any time.

This advisory replaces the previously issued flash flood warning that was in effect for portions of the island of Hawaii in Hawaii County.

At 849 PM HST…radar and rain gauges showed moderate to locally heavy rain over the Puna and South Hilo Districts, with the most intense rainfall rates of 1 to 2 inches per hour near Pahoa. Hawaii County Civil Defense reports areas of water on the road along Highway 130. Another area of moderate rain may move onshore shortly to the east and southeast of Wood Valley.

8:27 p.m. by the Hawai‘i Department of Transportation – Highway 19 at Kaawali Gulch is open “thanks to our amazing rock stabilization contractor Pierre Rousseau and crew,” DOT tweeted.

8:11 p.m. by the National Weather Service – A Flash Advisory was issued for the North Kohala area of Hawai‘i Island until 11:15 p.m. HST. Forecasters said:

At 809 PM HST, radar indicated moderate to locally heavy rain over the North Kohala District. The highest rainfall rates were estimated to be up to one inch per hour between Waipio Valley and Hawi. Rainfall is likely to continue across these same areas through the evening.

Locations in the advisory include but are not limited to… Pololu Valley, Waipio Valley, Kukuihaele, Kohala Ranch, Hawi, Halaula, Kamuela, Kapaau, Waimanu Valley, Honokaa and Puako.