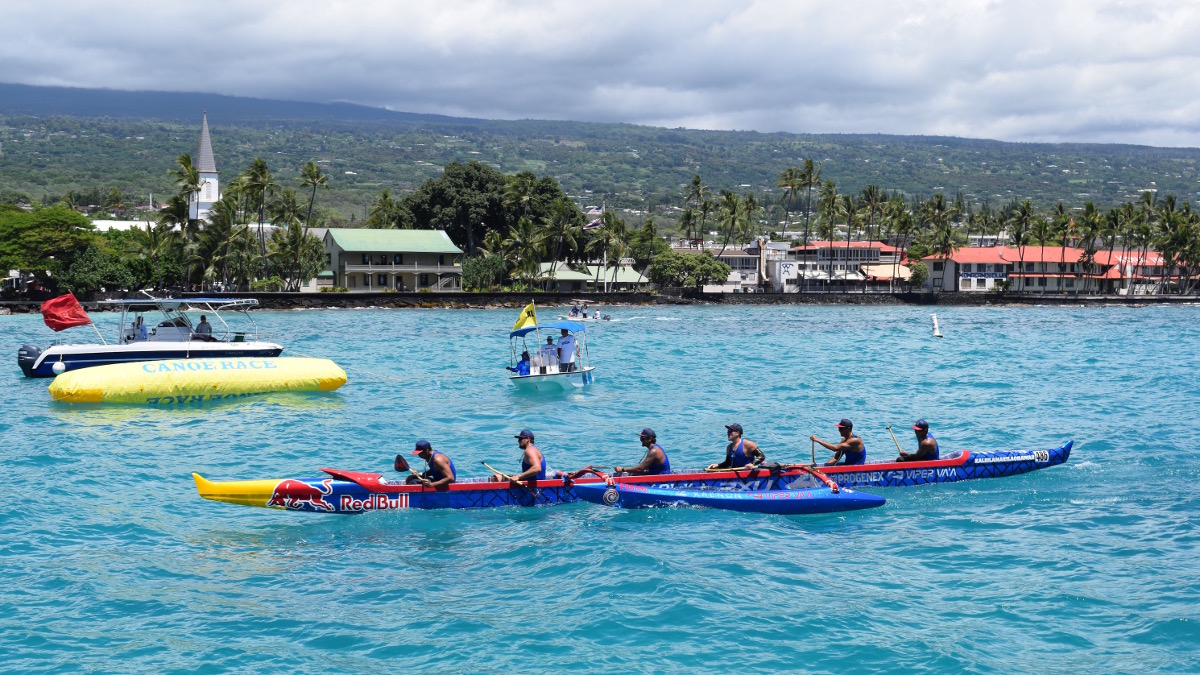 (BIVN) – The results are in for the Queen Lili‘uokalani Long Distance Canoe Race hosted by Kai ‘Ōpua Canoe Club.

From the canoe race organizers:

Hundreds of canoe paddlers joined hands on the sands of Kamakahonu Bay as noted historian Hannah Springer led the morning pule (prayer) as the sun began to rise over Mt. Hualalai. It was the perfect start to the 2018 Queen Lili‘uokalani Long Distance Canoe Race hosted by Kai ‘Ōpua Canoe Club. At 7:30 a.m. the starting flags dropped and the women launched from Kailua Bay followed by the Mix 40+ crews. In all, there were 103 women’s crews and 116 men’s crews.

This is a milestone year for the women as the division celebrates 45 years at the Queen Lili‘uokalani Long Distance Canoe Race. The race community salutes the strength and focus of women paddlers who have achieved so much over the years and improved the sport of outrigger canoe racing.

Paddlers experienced a memorable day on the water under picture-perfect blue skies and superior ocean conditions. “The course conditions were excellent for racing this year. It was great to see so many entries after suffering through last week’s pre-race challenges with Hurricane Lane. But our canoe family came together and we had enough canoes for every crew who came here to race,” said Race Director Mike Atwood. “It took a lot to make it happen, but the smiles on everyone’s faces including officials, paddlers and spectators told me it was the best race day we have had in years.”

Men’s crews raced the return 18-mile course from Hōnaunau back to Kailua Bay and Red Bull Wa‘a crossed the finish line first in the Iron Non Koa Open Division with a time of 1:51:08. Hui Nalu Canoe Club took first in the Iron Unlimited Division with a time of 1:53:21. Red Bull Wa‘a battled it out all the way to the finish line and pulled off their third victory in a row here at Kona’s Queen Lili‘uokalani Long Distance Canoe Race. All winning crews will stand proud on the winners podium set for later this afternoon.

“Every year, paddlers strive to come to Kona and be a part of this great race. What an honor it is for us to share the spirit of Hawaiian outrigger canoe racing with the world,” said Kai ‘Ōpua Canoe Club President Uncle Bo Campos. “Mahalo nui loa to everyone who comes together to help Kai ‘Ōpua Canoe Club make this world’s largest long distance canoe race such a success. We couldn’t do it alone.”

Spectators and race enthusiasts from around the world utilized live online tracking as an opportunity to follow their favorite crews from their mobile device or desktop in real time. New this year, Queen’s Race went live on Facebook giving viewers a seat on the course with expert commentary by veteran paddlers and local radio personality Eddie O.