HAWAII ISLAND - Forecasters say residents should "use this time to prepare for the increasing likelihood of direct impacts from this system."

(BIVN) – Hurricane Olivia has made its way into the Central Pacific, triggering the first message about the storm from Hawaii County Civil Defense on Saturday.

“It is too early to know what effects, if any, this hurricane will have on Hawaii Island,” the noon message stated. “There are no warnings or advisories in effect at this time.” 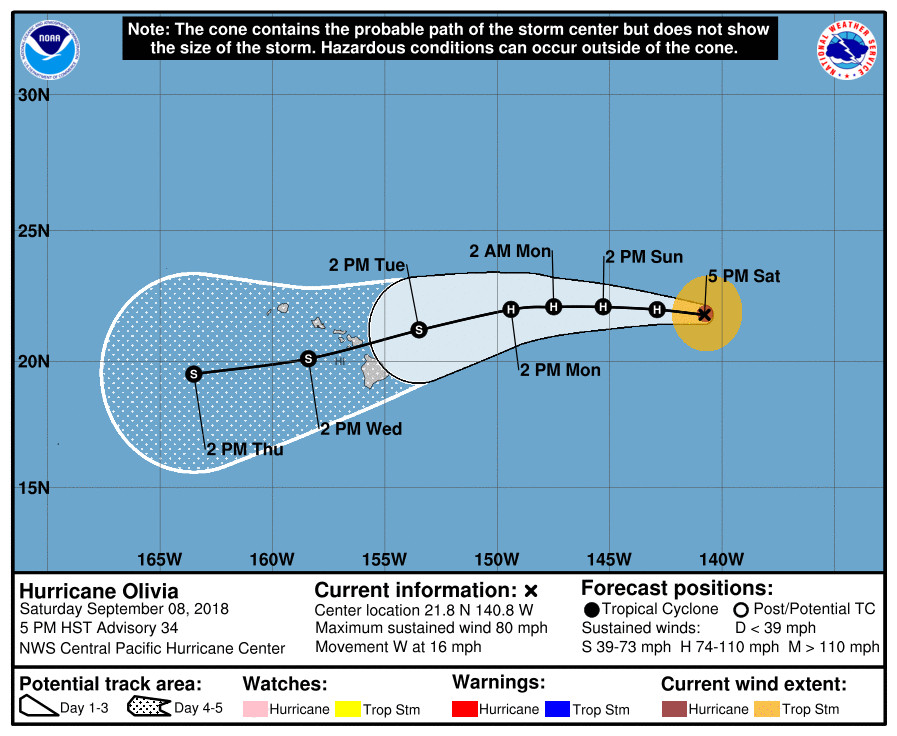 Olivia is 935 miles east of Hilo, moving toward the west near 16 mph. “This motion is expected to continue with some slowing in forward speed through Monday,” the Central Pacific Hurricane Center stated at 5 p.m., as it took over the advisory duties from the National Hurricane Center earlier today. “A turn toward the west-southwest is expected by Tuesday. On the forecast track, Olivia will be near the main Hawaiian Islands later Tuesday.”

Maximum sustained winds are near 80 mph with higher gusts. “Olivia lost its well-defined center feature in conventional satellite imagery late this afternoon and now appears as a rather messy asymmetric blob of deep convection,” CPHC forecasters said at 5 p.m. “However, SSMI and GMI overpasses at 2349 and 2336 UTC, respectively, showed an eyewall remained, except for a break on the west side, along with a very well organized low level circulation.”

“Olivia is in a very weak shear environment, but moving over marginal sea surface temperatures of 25.5C,” forecasters added. “The hurricane has already traversed the coolest water it was going to encounter, but SSTs stay sub-27C until Olivia gets close to the islands. This should allow Olivia to only very slowly weaken or maintain intensity through the next 24 to 48 hours. Shear should begin to gradually increase over Olivia after 48 hours, leading to a slow weakening trend, but likely not soon enough to prevent some significant impacts to the main Hawaiian Islands.” 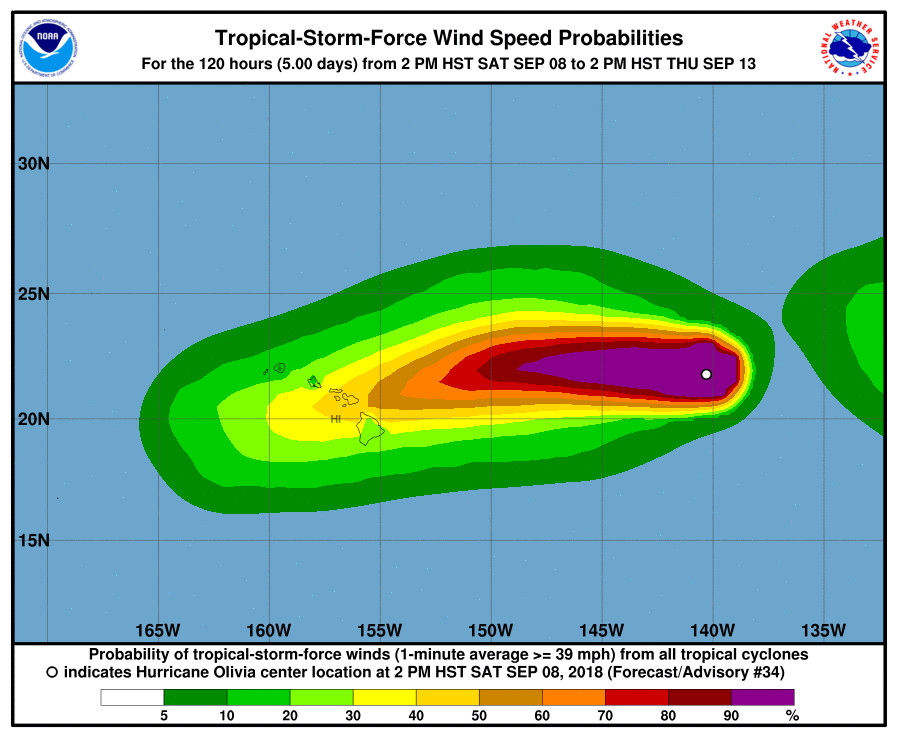 A strong deep layer ridge to the west of Olivia will play a role in the direction of the storm, forecasters say. At 5 p.m., the Central Pacific Hurricane Center wrote:

Olivia is moving just north of due west, to the south of strong deep layer ridging to the west through north of the tropical cyclone. Little change is anticipitated for the first 48 hours or so as this ridging builds westward in tandem with Olivia. After 48 hours, the portion of the ridge to the west of Olivia is forecast to strengthen, shunting the tropical cyclone on a more west-southwest motion. The track guidance remains fairly tightly clustered, and this forecast is very similar to the previous forecast track, which brings the center of Olivia over the main Hawaiian Islands between 72 and 96 hours. A more westward motion is expected to resume after Olivia’s passage through the islands, as the upper ridge retreats westward and the circulation center becomes increasingly steered by the lower level trades.

According to the “key messages” posted by the CPHC:

“Civil Defense is monitoring the storm and will keep you informed of any changes that may affect your safety,” county officials stated. “Do take this time to assure that emergency plans are updated.”