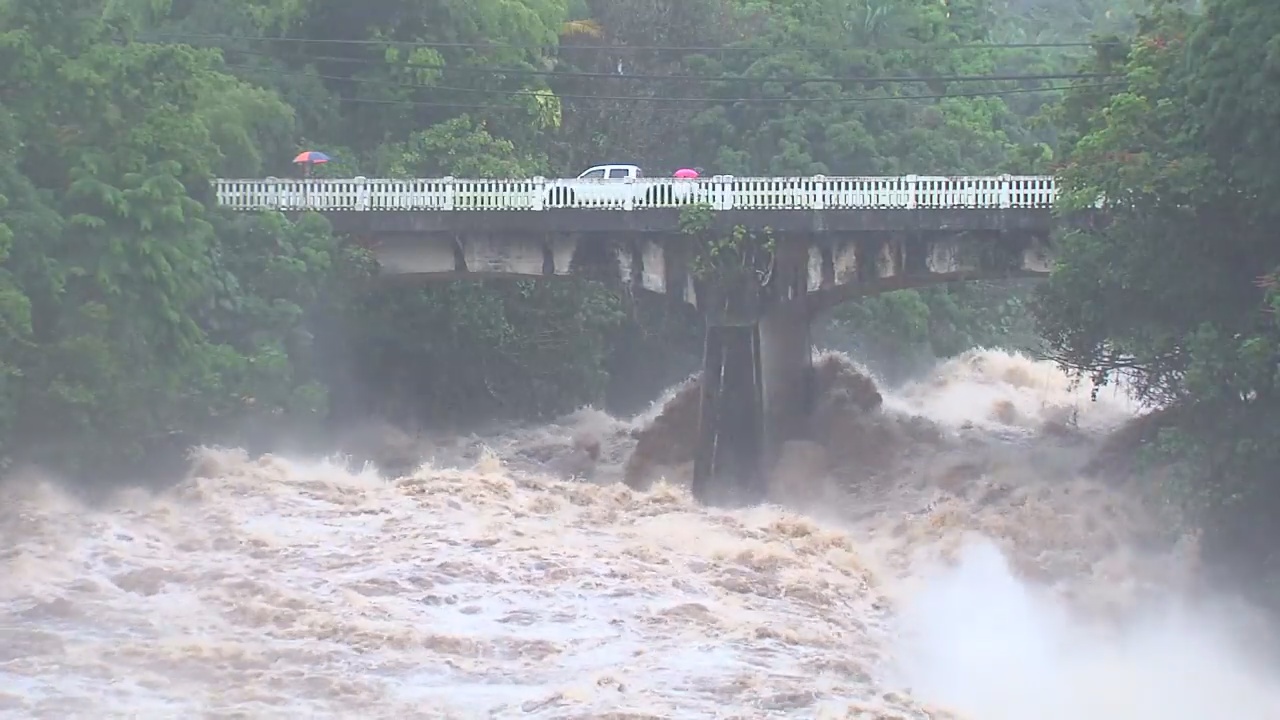 (BIVN) – As Hurricane Olivia approaches, the State of Hawai‘i still awaits a possible major disaster declaration following the passage of a previous storm.

Gov. David Ige has asked the President Donald Trump to declare a major disaster for Hawai‘i as a result of the impacts from Hurricane Lane. This includes floods and wildfires that occurred as a result of the hurricane, from Aug. 22 to Aug. 29, 2018.

“The disaster is of such severity and magnitude that effective response exceeds the capability of the state and impacted local governments, and that supplemental federal assistance is required,” the governor’s Sept. 6 request stated. “Therefore, I request the declaration authorize the Public Assistance Grant Program and the full complement of Individual Assistance programs as well as the Small Business Administration (SBA) Disaster Assistance program for Hawai’i County and Maui County. In addition, I request the Hazard Mitigation Grant Program statewide. Furthermore, I request 100 percent federal funding for a 72-hour period in the initial days of the disaster.”

The governor’s request broke down the impacts on a county-by-county basis. “Preliminary data from the National Weather Service indicates Hurricane Lane produced the second highest storm total rainfall from a tropical cyclone in the U.S. since 1950. Hilo experienced the wettest three-day period ever observed. Firefighters rescued 39 people in an area that received four feet of rain,” the request stated. “The county Department of Environmental Management reported significant rainfall overwhelmed three sewage pumping stations, causing more than nine million gallons of untreated sewage to be discharged around Hilo Bay. A statewide brown water advisory was issued due to the high amounts of storm water runoff including overflowing cesspools, sewer systems, and other associated flood debris entering coastal waters.”

“The Salvation Army thrift store in Hilo was indefinitely closed after heavy rains caused portions of the roof to fail, flooding the store’s merchandise and preventing them from accepting donations,” the documents says. “The agency has been a critical resource in supporting families displaced by the Kilauea eruption with three-meal-a-day service and other essential supplies.”

Individual Assistance
A Joint Preliminary Damage Assessment (JPDA) was conducted for Hawai’i County by state, county, Small Business Administration (SBA) and FEMA representatives beginning August 26, 2018. A JPDA was completed for Maui County on September 5, 2018. A table of findings is in Enclosure A.

Public Assistance
JPDAs were performed by state, county and FEMA representatives between Monday, August 27, 2018 and Thursday, August 30, 2018. A table of their findings is in Enclosure B. Over $22 million in damages across the state were verified in Hawai’i, Kaua’i and Maui Counties, which is well in excess of the state’s $2 million public assistance threshold.

The request included a word on the “disruption of normal community functions and economic impacts”.

“Daily visitor spending averages $51.5 million statewide and was dramatically impacted when attractions and local businesses shut down during the storm,” the governor’s request said. “One cruise line cancelled two scheduled dockings in Hilo and Kona due to Hurricane Lane, costing an estimated $450,000 in economic losses. The total economic loss due to the numerous closures and cancellations across the state is yet to be determined but will be in the tens of millions of dollars.”

Governor Ige urged the federal government to consider the request in light of the destructive eruption of Kilauea.

Hawaii County had just begun to transition to a complicated recovery from the Kilauea volcano lava flow when Lane’s impacts were felt. All county agencies and multiple state agencies have been continuously activated for response and recovery efforts since the eruption began in May. Residents have been in a prolonged state of uncertainty as evacuation orders remain in effect and the future of their communities remains uncertain. With over 700 homes destroyed, housing shortages have kept emergency shelters open and resulted in FEMA authorizing a direct housing mission just prior to Hurricane Lane. Impacts to the visitor industry, particularly the extended closure of Hawaii Volcanoes National Park, have caused the county to suffer economically devastating impacts in addition to the physical damage.

Though the impacts of Hurricane Lane are much less than what was feared, against the backdrop of these two other events, which have taken a substantial emotional, economic and physical toll on residents, businesses and government, they become much more consequential. State and local governments, particularly Hawai’i County, were already struggling with the costs of these earlier disasters and how to stretch their limited resources to support rebuilding efforts. Hawai’i County has spent approximately $12 million on immediate response activities related to the eruption alone and has identified the need for an additional $800 million to finish recovery. While fewer homes were destroyed by the effects of Hurricane Lane, the ability of impacted residents to recover is challenged by the reality that government, community and voluntary agency resources have been depleted by the earlier disasters. Additional federal support is needed for Hurricane Lane response and recovery efforts.

“We request your quick action on Governor David Ige’s request for federal aid to help Hawai‘i recover from the flooding-related impacts of Hurricane Lane and recent wildfires,” the delegation of Sen. Brian Schatz, Sen. Mazie Hirono, Rep. Tulsi Gabbard, and Rep. Colleeen Hanabusa wrote. “Hurricane Lane is the third natural disaster that Hawai‘i has faced since April of this year, and our impacted communities need the full suite of assistance from the Federal Emergency Management Agency (FEMA) along with the other federal disaster programs that become available upon the issuance of a presidential disaster declaration. Your initial emergency declaration for Hurricane Lane allowed for critical support as the state and counties made their preparations. We are grateful for your quick response to the Governor’s request at that time, and we request your continued support for the people of Hawai‘i.”