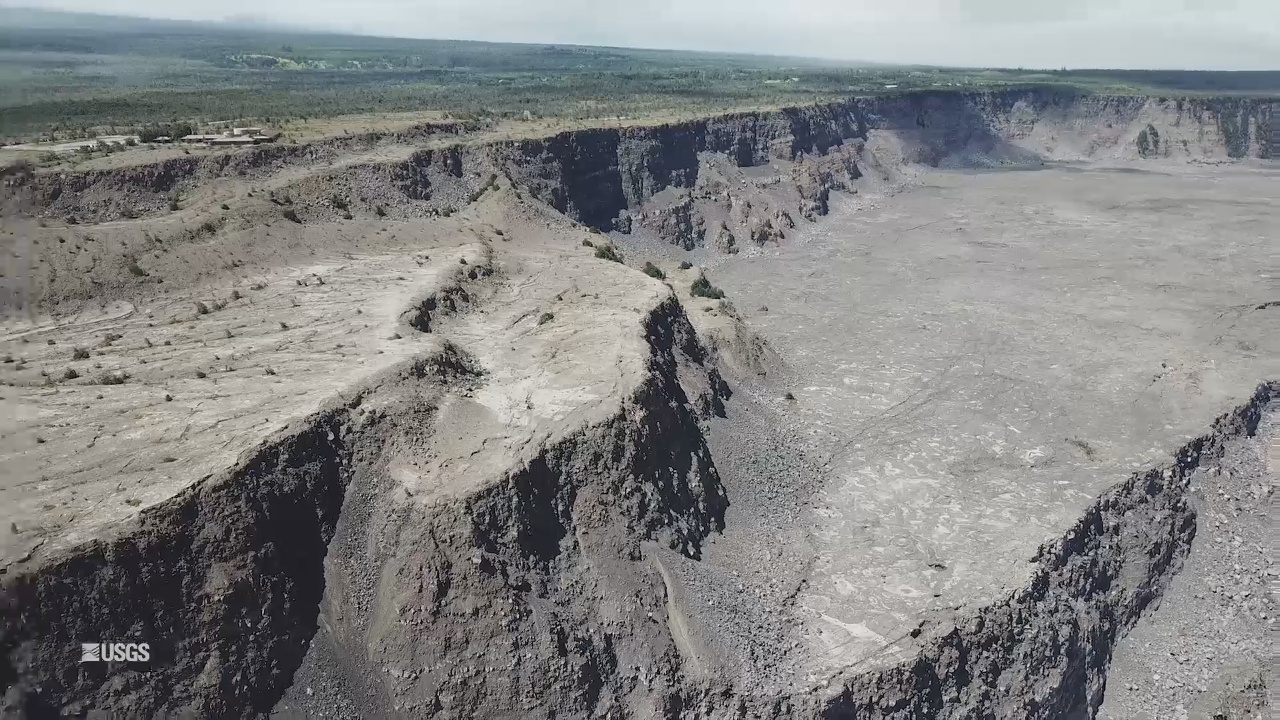 image from UAS video of the Kīlauea summit

HAWAII VOLCANOES NATIONAL PARK - Scientists wonder if this summer’s collapse could be all that will happen — or if it could be the start of a longer period of repeated collapses that finally involve the entire summit. 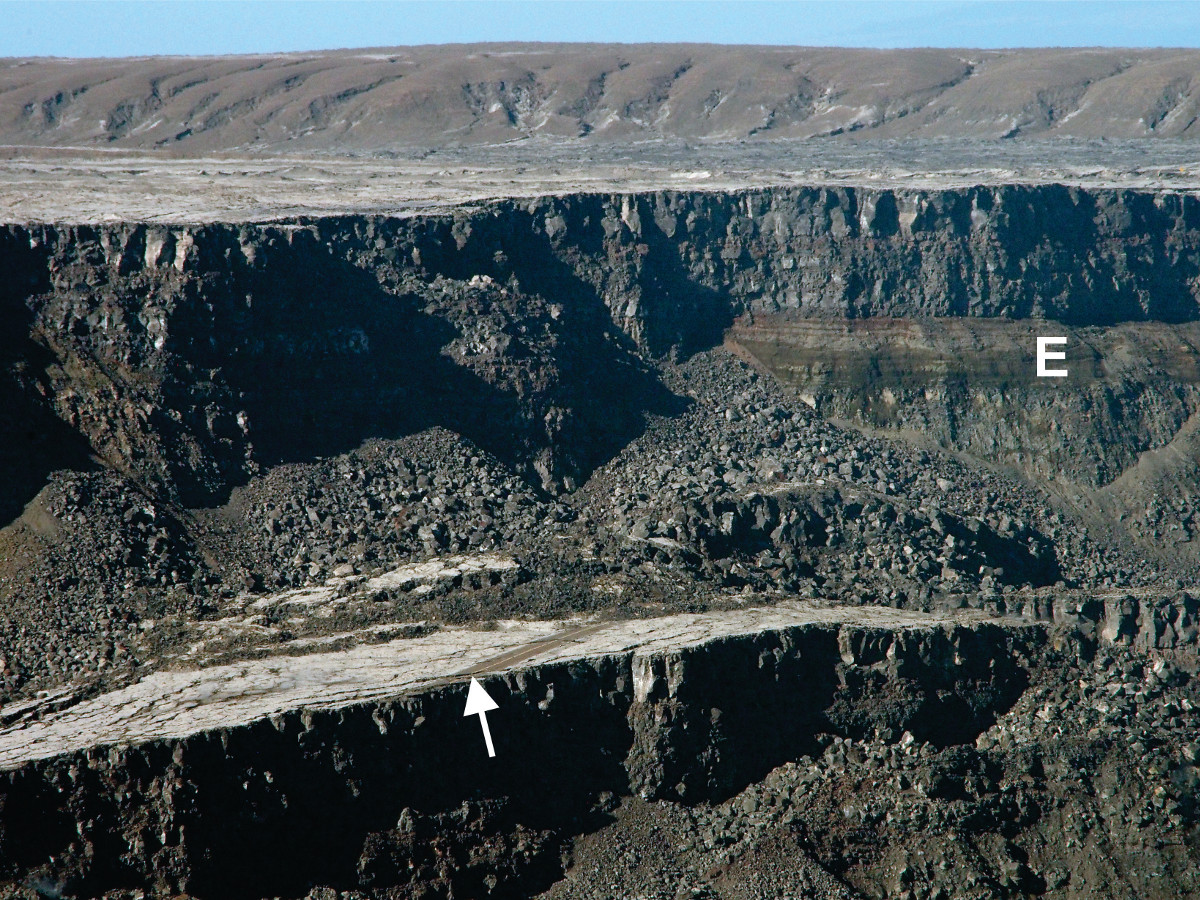 South side of Halemaʻumaʻu at the summit of Kīlauea Volcano, showing a short section of Hawaiʻi Volcanoes National Park’s Crater Rim Drive (arrow) preserved on a block of the former caldera floor that has dropped down about 80 m (260 ft). Thinly bedded Kīlauea explosion deposits (E) from 16th-18th centuries are overlain by 19th and 20th century lava flows in the wall of Halemaʻumaʻu. USGS photo by D. Swanson.

(BIVN) – Following the dramatic changes at the summit of Kīlauea Volcano, the highly anticipated reopening of Hawaiʻi Volcanoes National Park is set for this weekend. Meanwhile, scientists are still keeping a close eye on the caldera.

Seismicity and ground deformation remain low at the summit of Kīlauea, the U.S. Geological Survey Hawaiian Volcano Observatory reports, with only a handful of small aftershocks from the magnitude-6.9 earthquake in early May still being generated on faults located on the South Flank.

The limited collapse of the inner part of Kīlauea Volcano’s caldera this summer fell well short of the larger summit-wide collapses that occurred in the past. How many such limited collapses can we recognize at Kīlauea before written records were kept? The answer is none.

Yes, none. Without written descriptions, we could not identify past small-scale caldera collapses. The reason is that such collapses are confined to the inner part of the caldera itself, exactly where later eruptions and the next collapse take place.

The eruptions partly or completely fill the small collapse depression, and the next small collapse overprints the preceding one, like walking on someone else’s footsteps. We might get a geologic hint of repeated small collapses under favorable circumstances, but usually we are out of luck.

Putting together the evidence for such events is complicated, time-consuming, field-oriented research, but it paid dividends at Kīlauea by recognizing large-scale cyclic behavior of the volcano during the past 2,500 years.

Among other things, we learned that each summit-wide caldera collapse was followed by centuries during which the supply rate of magma to the ground surface was apparently low—only several percent of that for the past 200 years. As a result, only a few lava flows erupted from one of the rift zones outside the caldera.

Within the caldera, however, many explosive eruptions took place. Lava could have erupted in the caldera, but never with sufficient volume to fill the caldera and spill out to form surface flows. Eventually the supply rate increased, the caldera filled, and lava flows erupted along the rift zones. The volcano has been doing this for the past 200 years.

The previous two summit-wide caldera collapses occurred about 2,200 and 500 years ago, respectively. Each of these collapses was immediately preceded by the development of a very large flow field on the flank of Kīlauea.

What could be the reason that eruption of a vast flow field preceded a large caldera collapse?

There are two end-member possibilities. One is that rapid melting of rock in the mantle came to an end, so that there was little magma coming up the pipe to replenish magma erupted in a large flow field. The other is that magma continued to ascend but was hijacked before reaching the ground surface, going somewhere else in or below Kīlauea.

What about the large Pu‘u ‘Ō‘ō flow field? That eruption lasted just over 35 years and accumulated a volume equivalent to that of the Kīpuka Nēnē flow field. That makes Pu‘u ‘Ō‘ō either the second or third largest flow field known in the past 2,500 years on Kīlauea.

Since each of the other two large flow fields immediately preceded a summit-wide caldera collapse, is the Pu‘u ‘Ō‘ō flow field sending a message? Will this summer’s small summit collapse eventually resume and ultimately engulf the entire summit?

The geologic evidence is insufficient to tell us how long it took for past large collapses to fully develop. Such collapses could have happened in only a few weeks or could have been spread over years to several decades.

In this light, this summer’s collapse could be all that will happen — or it could be the start of a longer period of repeated collapses that finally involve the entire summit. We simply can’t tell at this stage. It will probably take decades before we know if the size of the Puʻu ʻŌʻō flow field was a harbinger of major collapse or only a red herring.