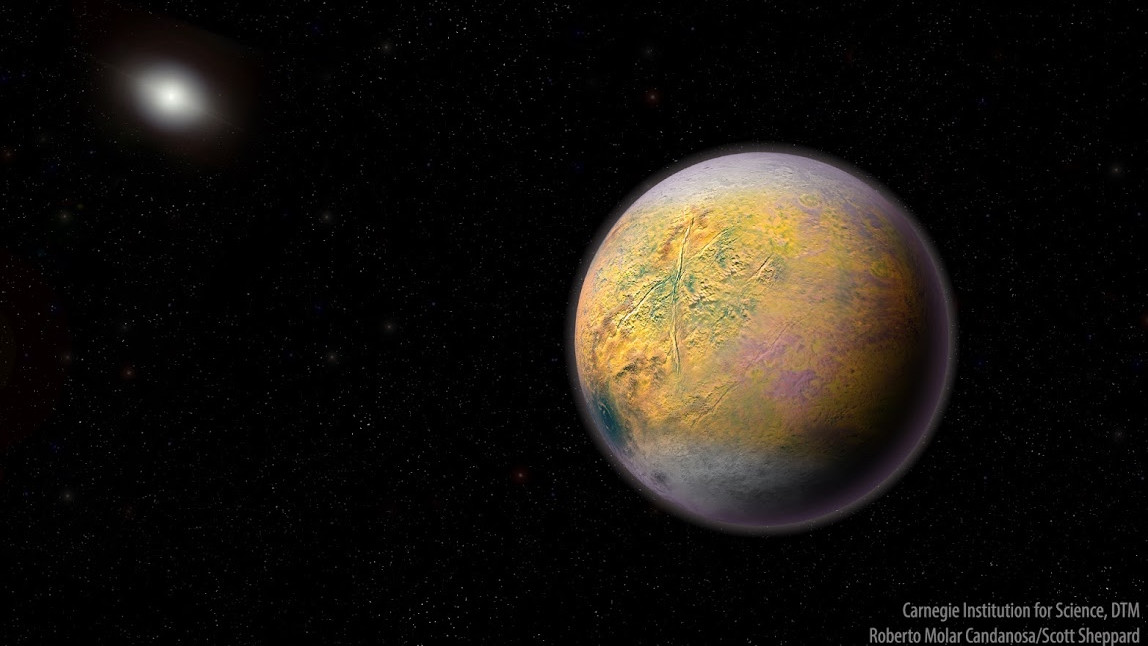 HAWAIʻI - The object, nicknamed "The Goblin", was first observed from the Subaru telescope on Mauna Kea in October 2015, the University of Hawaiʻi says. 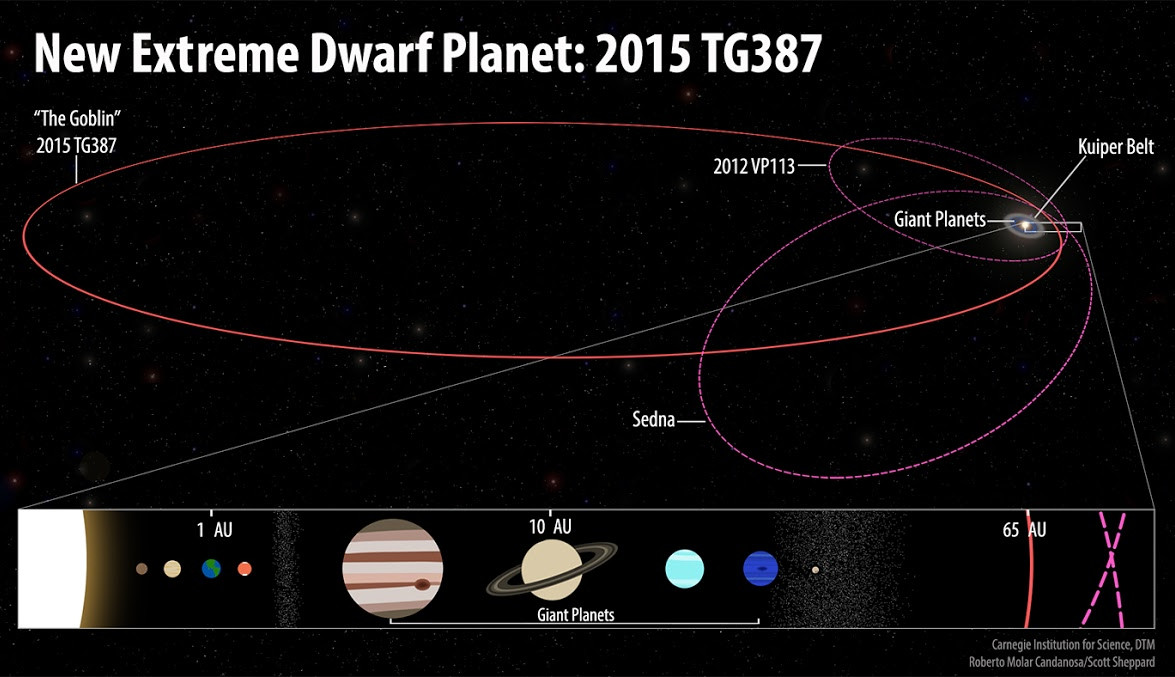 The orbits of the new extreme dwarf planet 2015 TG387 and its fellow Inner Oort Cloud objects 2012 VP113 and Sedna as compared with the rest of the Solar System.

(BIVN) – Astronomers have discovered a new object at the edge of our Solar System, far beyond Pluto, that has an orbit that “supports the presence of an even-farther-out Super-Earth, or larger Planet X.”

The newly found object, called 2015 TG387 and nicknamed “The Goblin” as it was first seen near Halloween, was announced by the International Astronomical Union’s Minor Planet Center on Tuesday. The discovery was made by Carnegie Institution for Sciences’ Scott Sheppard, Northern Arizona University’s Chad Trujillo, and the University of Hawaii’s David Tholen.

2015 TG387 was discovered about 80 astronomical units (AU) from the Sun. One AU is equal to the distance between the Earth and Sun. Pluto, for example, is around 34 AU. The Goblin object is about two and a half times further away from the Sun than Pluto is right now.

According to the University of Hawaiʻi, David Tholen first observed 2015 TG387 in October of 2015 at the Japanese Subaru telescope on Mauna Kea. The team’s software detected the unusual moving object, UH says, which led Tholen to more carefully measure the object’s position and determine where to point other telescopes for follow-up observations.

According to the University of Hawaiʻi:

It took the team a few years of observations to obtain a good orbit for 2015T G387 because it moves slowly, over a large orbit, so it has a very long orbital period. Follow-up observations at the Magellan telescope at Carnegie’s Las Campanas Observatory in Chile and the Discovery Channel Telescope in Arizona, were obtained in 2015, 2016, 2017 and 2018, to measure 2015 TG387’s orbit.

With these data in hand, they determined that the newly-found object is on a very elongated orbit and the closest it ever gets to the sun, a point called perihelion, is about 65 AU. Only 2012 VP113 and Sedna, at 80 and 76 AU respectively, have more distant perihelia than 2015 TG387. Even though 2015 TG387 has the third-most-distant perihelion, its orbital semi-major axis is larger than that of both 2012 VP113 and Sedna, meaning it travels much farther from the Sun than they do. At its furthest point, it reaches all the way out to about 2,300 AU. 2015 TG387 is one of the few known objects that never comes close enough to the solar system’s giant planets, like Neptune and Jupiter, to have significant gravitational interactions with them.

“These so-called Inner Oort Cloud objects like 2015 TG387, 2012 VP113, and Sedna are isolated from most of the solar system’s known mass, which makes them immensely interesting,” Sheppard explained. “They can be used as probes to understand what is happening at the edge of our solar system.”

The object with the most distant orbit at perihelion, 2012 VP113, was also discovered by Sheppard and Trujillo, in 2014. The discovery of 2012 VP113 led Sheppard and Trujillo to notice similarities of the orbits of several extremely distant solar system objects, and they proposed the presence of an unknown planet several times larger than Earth—sometimes called Planet X—orbiting the Sun, well beyond Pluto at hundreds of AU.

The object was discovered as part of the team’s ongoing hunt for unknown dwarf planets and Planet X. It is the largest and deepest survey ever conducted for distant solar system objects.

“These distant objects are like breadcrumbs leading us to Planet X. The more of them we can find, the better we can understand the outer solar system and the possible planet that we think is shaping their orbits-a discovery that would redefine our knowledge of the solar system’s evolution,” Sheppard added.

2015 TG387 is likely on the small end of being a dwarf planet, since it has a diameter of roughly 300 kilometers. The location in the sky where 2015 TG387 reaches perihelion is similar to 2012 VP113, Sedna, and most other known extremely distant trans-Neptunian objects, suggesting that something is pulling them into similar types of orbits.

Trujillo and University of Oklahoma’s Nathan Kaib ran computer simulations to see how different hypothetical Planet X orbits would affect the orbit of 2015 TG387. The simulations included a super-Earth-mass planet at several hundred AU on an elongated orbit, as proposed by Caltech’s Konstantin Batygin and Michael Brown in 2016, building on earlier work by Sheppard and Trujillo. Most of the simulations showed that not only was 2015 TG387’s orbit stable for the age of the solar system, but it was actually shepherded by Planet X’s gravity, which keeps the smaller 2015 TG387 away from the massive planet. This gravitational shepherding could explain why the most distant objects in our solar system have similar orbits. These orbits keep them from ever approaching the proposed planet too closely, similar to how Pluto never gets too close to Neptune even though their orbits cross.

“What makes this result really interesting is that Planet X seems to affect 2015 TG387 the same way as all the other extremely distant Solar System objects. These simulations do not prove that there is another massive planet in our Solar System, but they are further evidence that something big could be out there,” Trujillo concludes.

“We think there could be thousands of small bodies like 2015 TG387 out on the solar system’s fringes, but their distance makes finding them very difficult,” Tholen said. “Currently we would only detect 2015 TG387 when it is near its closest approach to the sun. For some 99 percent of its 40,000-year orbit, it would be too faint to see, even with today’s largest telescopes.”