(BIVN) – A pedestrian public access easement grant for a North Kohala trail was given prelimnary approval by the Hawaiʻi County Council Finance Committee on Tuesday. 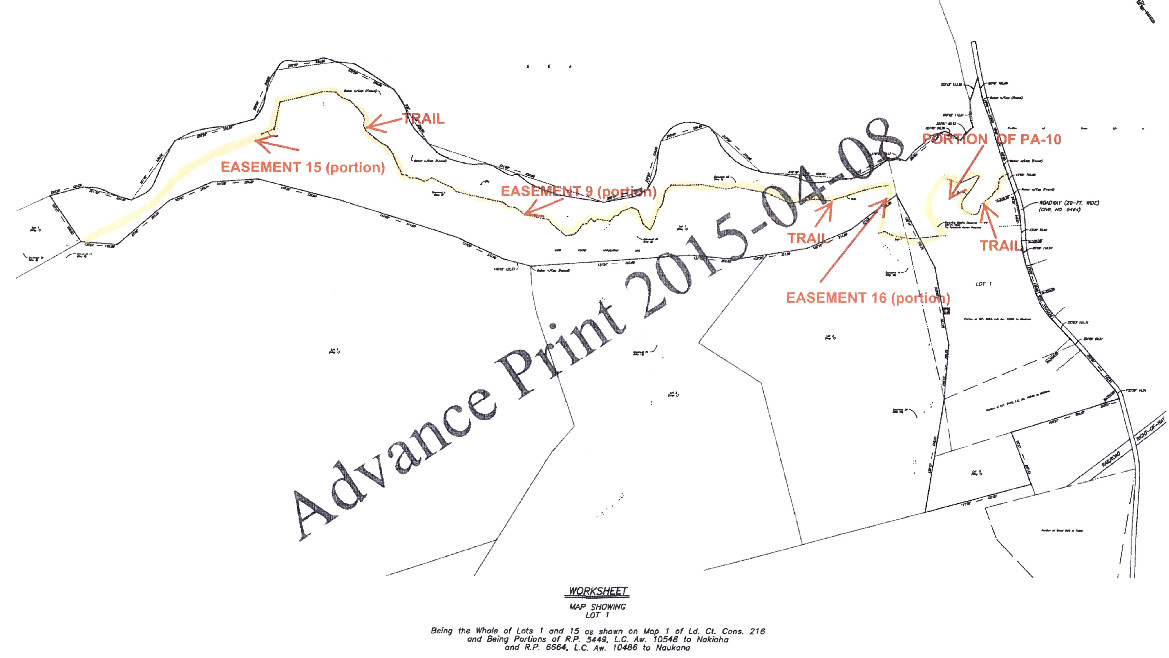 The proposed grant of easement for pedestrian purposes is the culmination of a long history of negotiations and input from public agencies interest groups originating in 2002, when Surety Kohala Corporation was in the process of subdividing former sugar cane lands of which these shoreline parcels are a part. A settlement agreement between the County and Surety Kohala included the proposed access as a subdivision requirement.

Consistent with the terms of the settlement agreement, when VH acquired Parcels 10 and 14 (Inhabit LLC later acquired Parcel 14), it commenced negotiations with the County to complete the grant of access requirements once the Planning Department adopted its Rule 21, relating to the County’ s management of public access locations.

Input from the State Historic Preservation Division (SHPD), the North Kohala Community Access Group (NKCAG) and the Ala Kahakai Trails Access entity, together with on site consultation, resulted in a trail location considered to be optimum under the circumstances. A composite map depicting the proposed trail location, which avoids crossing historic sites, allows for steep slopes to be traversed diagonally, and is situated at a safe location away from cliff edge, while respecting private property interests, is enclosed for your review.

The Kona end of the trail is located in the vicinity of the Kohala Lighthouse. The Hilo end of the trail is at Kapanaia Road, where the County recently acquired land for public use. Just south of the area is the Hale 0 Kaʻili Heiau, built by Kamehameha I. The access location runs along the coast, on top of bluff areas and crosses Halelua Gulch and Halewa Gulch. Within the gulch areas are located a heiau and agricultural terraces. The coastline is home to native seabirds and the views are spectacular. Somewhat unique in this lateral access concept is the requirement that the trail may be relocated when erosion occurs. However, the trail is located at a safe distance from the shoreline or cliff edge.

As the area is still considered pristine, it is also important that those who access the area respect the historic and natural resources and use the access in a safe manner. In the past, there have been incidences of misuse of the area, such as rave parties, camping, the burning of fires and littering. Hence, assuring that the pedestrian access to be allowed is subject to certain basic restrictions is an important component of the access. Towards this end, the proposed Grant of Public Access Easements (GOE) references compliance with the Planning Department’ s Rule 21, prohibits the use of motor vehicles (with the exception of County maintenance vehicles), prohibits hunting and firearms, and allows for consultation in the placement of public information signs.

The resolution will next go the full council for a vote in the coming weeks.