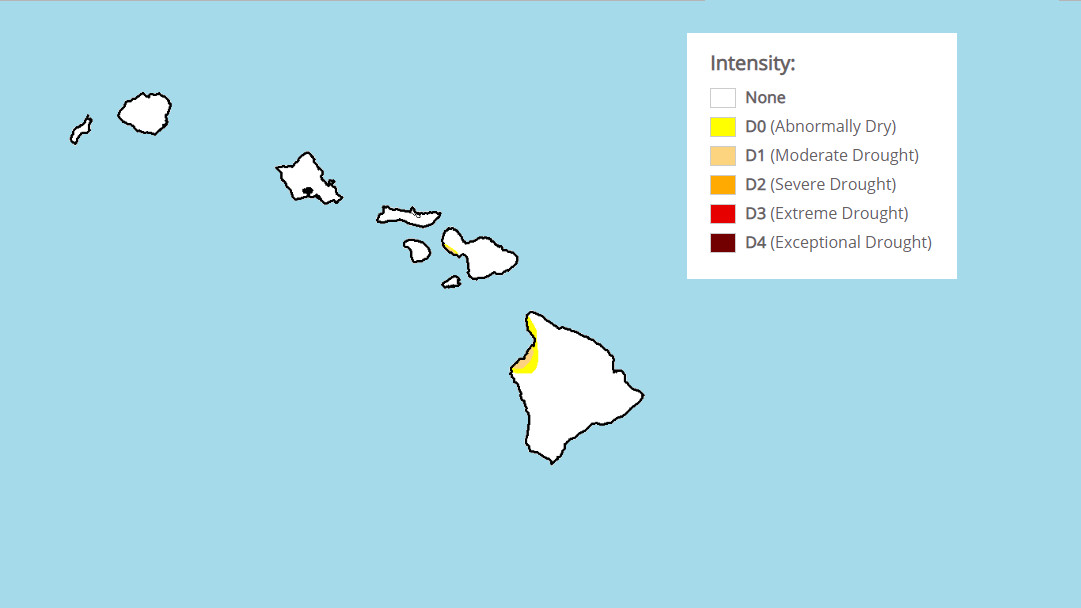 HAWAIʻI ISLAND - Remaining drought conditions in South Kohala and North Kona will soon be completely eliminated, while a transition to El Niño conditions looms on the horizon.

(BIVN) – On Friday, the final Drought Information Statement was issued by the National Weather Service in Honolulu, at least until severe drought returns to the main Hawaiian Islands.

“Above average rainfall during September, which included the impact of Tropical Storm Olivia, brought continued relief to the remaining leeward areas still affected by drought conditions,” the National Weather Service stated. “Thus, severe drought, or the D2 category on the U.S. Drought Monitor Map, has eased to moderate drought, or the D1 category over the lower leeward slopes of west Maui and the South Kohala and North Kona Districts of the Big Island. It is expected that even these remaining D1 areas will be removed soon as vegetation continues to recover.”

Pastures and general vegetation over the lower elevations of the South Kohala and North Kona Districts have been improving, and it is expected that drought conditions will soon be completely eliminated, the NWS statement says.

“Data from the U.S. Geological Survey indicated that most of the monitored streams across the state had flow levels in the above normal to high flow percentile classes,” the Drought Information Statement says. “Based on the precipitation outlook, flow levels are expected to decrease by late 2018.”

The forecasted persistence of above average sea surface temperatures around the Hawaiian Islands should also keep temperatures across the entire state above normal into early 2019, NOAA says.