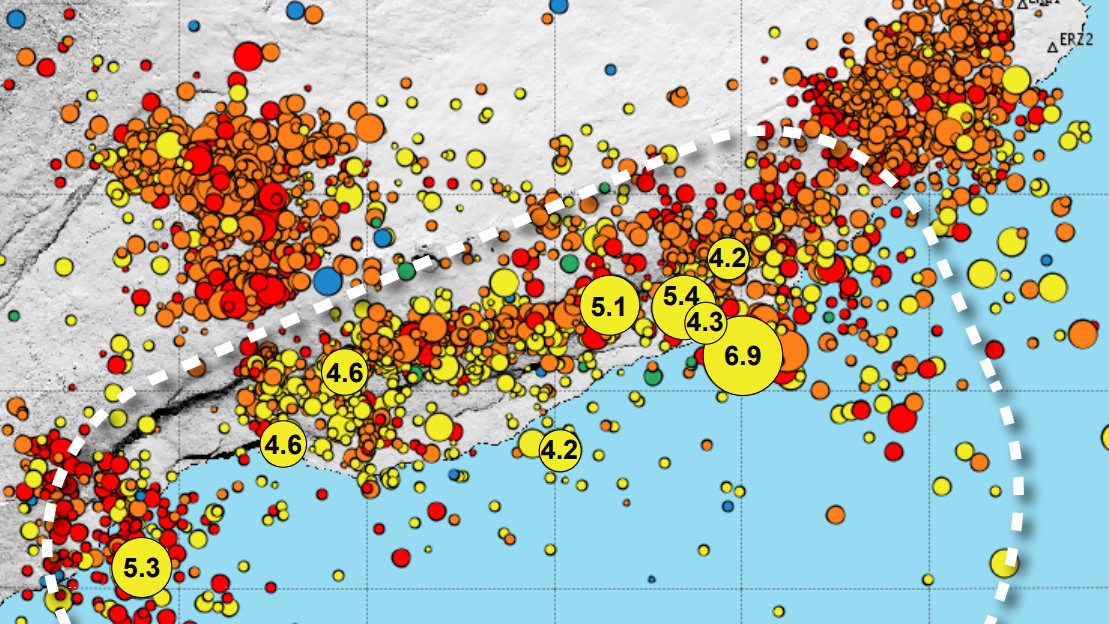 Inset of graphic by USGS

HAWAIʻI ISLAND - Five months after the 6.9 earthquake occurred during the eruption of Kilauea, smaller-magnitude earthquakes in the same area are still occurring.

(BIVN) – Seismicity, deformation, and gas emission are reduced at the summit and East Rift Zone of Kīlauea Volcano. However, the USGS Hawaiina Volcano Observatory says earthquakes continue to occur on the south flank of the volcano, “with continued small aftershocks of the magnitude-6.9 quake on May 4, 2018.” 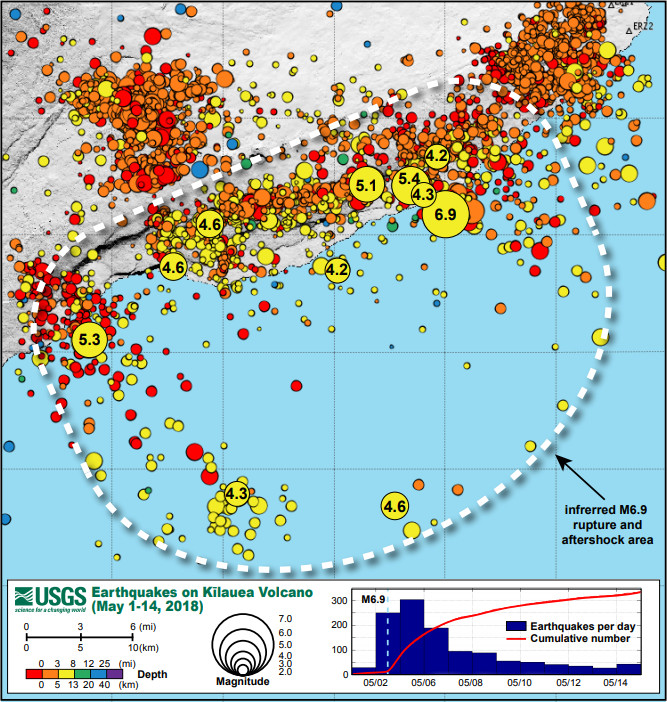 The USGS graphic above illustrates the inferred rupture area (white dashed line) of the May 4 magnitude-6.9 earthquake, “with its foreshocks and first 10 days of aftershocks, spans an area of about 800 sq km (300 sq mi),” USGS says. “Circle size indicates earthquake magnitude; color indicates earthquake depth. Magnitudes for some of the larger events are labeled. Inset graph shows the aftershock decay rate for May 4-15, 2018.”

In this week’s Volcano Watch article, HVO seismic network manager Brian Shiro reflects on the magnitude-6.9 earthquake, as well as the ongoing aftershocks.

On May 4, 2018, a powerful magnitude-6.9 earthquake on the south flank of Kīlauea Volcano shook the Island of Hawaiʻi. It was the largest quake in Hawaii in 43 years. Today, more than five months later, smaller-magnitude earthquakes in the same area are still occurring.

What causes these earthquakes, and how long will they last?

Most earthquakes are caused by patches of rock slipping along a fault plane within the Earth’s crust. The area and the distance of slip relate directly to the energy release (magnitude) of the earthquake.

Slip is not uniform during a major earthquake—some patches move more than others, and some do not move at all. This unevenness in motion within the Earth’s crust puts higher stresses on the patches that did not move than on the ones that did.

As the crust readjusts with time, these higher stresses give way to smaller earthquakes—called “aftershocks”—that occur on adjacent fault patches. The effect can cascade in avalanche-like fashion until the stresses caused by the major earthquake (known as the “mainshock”) even out.

During periods of intense seismic activity, there is no way to predict which earthquakes will be foreshocks, the mainshock, and aftershocks. These labels are applied retrospectively.

Prior to the 2018 Kīlauea eruption that started in Leilani Estates on May 3, migrating magma pushed through the East Rift Zone of the volcano. This compressed the south flank and caused slip along the island’s basal fault, resulting in thousands of earthquakes near the coast and offshore.

The sequence of larger events started with a magnitude-5.1 earthquake at 10:30 a.m. local time on May 3. A day later, at 11:32 a.m. on May 4, a magnitude-5.4 earthquake then claimed the titled as mainshock. One hour later, at 12:32 p.m., the eventual mainshock of the sequence occurred—the magnitude-6.9 earthquake that rattled the island with enough intensity to knock items off the shelves in Hilo stores. It was also felt statewide and produced a modest tsunami along nearby coastlines.

The first large aftershock occurred later that day—a magnitude-5.3 earthquake at 3:37 p.m. local time. So far, 15 aftershocks of magnitude-4 and higher, along with thousands of smaller events, have occurred in the sequence.

Plotting these earthquakes on a map reveals an area that extends offshore and spans about 800 square kilometers (300 square miles). We can infer this as the total fault area that ruptured during the sequence.

The statistical relationship between aftershock activity and time was first formulated by the pioneering seismologist Fusakichi Omori in 1894. In what is now known as Omori’s Law, the formula gives an inverse relationship between the probability of aftershocks and time. In other words, the longer the time since the mainshock, the less likely it is that an aftershock will occur. Omori’s formula helps inform aftershock seismic hazard assessment.

In the case of the 2018 magnitude-6.9 earthquake, Omori’s Law forecasts a decreasing frequency of aftershocks continuing in the area over the next year or more, including a small chance of a magnitude-6 earthquake during that time.

Interestingly, Omori had ties to the Hawaiian Volcano Observatory (HVO). In 1912, he supplied Thomas Jaggar, HVO’s founder, with the observatory’s first two seismographs. These instruments were housed in the Whitney Laboratory of Seismology at HVO’s original site near the present-day Volcano House hotel in Hawaiʻi Volcanoes National Park.

Given today’s focus on earthquakes, we take this opportunity to remind you of the upcoming 2018 Great Hawaii ShakeOut on October 18 at 10:18 a.m. HST. Please join over 70,000 Hawaii residents and more than 50 million people worldwide and practice “Drop, Cover, and Hold On”—the appropriate actions to take whenever you feel strong shaking. You can learn more about earthquake safety at here.