HAWAIʻI ISLAND - The threat ranking is not an indication of which volcano will erupt next, USGS says. Rather, it is an indicator of the potential severity of impacts that could result from future eruptions.

(BIVN) – Kīlauea is ranked as the number one threat among volcanoes monitored by the United State Geological Survey, in an updated Volcanic Threat Assessment just published by the federal government.

There are 18 volcanoes listed in the assessment as a “very high threat”. Mauna Loa is number 16 on that list.

Mauna Loa and Kīlauea are not currently erupting.

Threat groups are color coded, the USGS says. The very high threat is red, high is orange, moderate is yellow, low is green, and very low is blue.

Hualālai Volcano is listed as a high threat, while Haleakalā and Mauna Kea are listed as moderate threats. 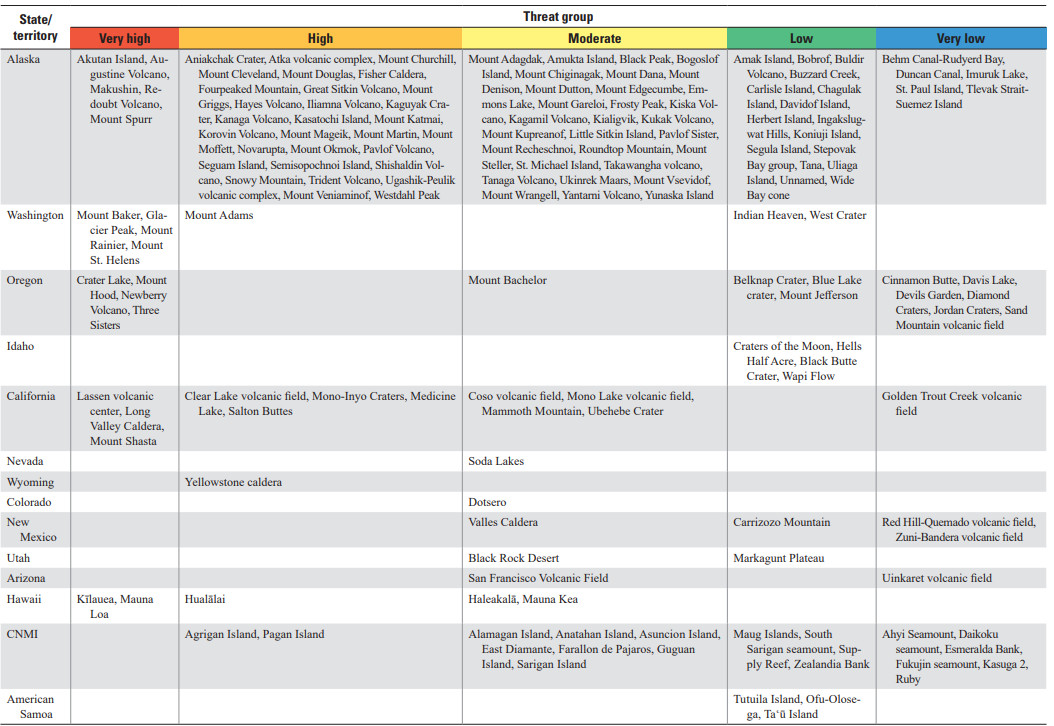 A media conference call was held today to talk about the updated Volcanic Threat Assessment. The recent, destructive eruption of Kīlauea Volcano on the lower East Rift Zone and at the summit was mentioned many times throughout the conversation. The video above presents a condensed version of the conference call with a focus on Hawaiʻi interests.

From the USGS media advisory issued before the conference call:

The United States has 161 young, active volcanoes within its borders. Since 1980, there have been 120 eruptions and 52 episodes of notable volcanic unrest at 44 U.S. volcanoes.

The U.S. Geological Survey systematically assesses U.S. volcanoes considered to be active or potentially active, and publishes a volcanic threat assessment that ranks the volcanoes based on 24 hazard and exposure factors. Last published in 2005, this 2018 update considers (1) field and laboratory research that adds or removes volcanoes from the list of potentially active volcanoes, and (2) updates the hazard and exposure factors used to produce a relative threat ranking of volcanoes.

The 2018 update of the 2005 assessment adds or raises the threat level for 12 volcanoes and reduces or removes threat level status from 20 volcanoes. The threat ranking is not an indication of which volcano will erupt next. Rather, it is an indicator of the potential severity of impacts that could result from future eruptions at any given volcano.

The volcanic threat assessment is used by the USGS to help guide and prioritize risk mitigation efforts at U.S. volcanoes through volcano research, hazard assessment, emergency planning and preparation and monitoring efforts with federal, state and local government partners. The prioritization of risk mitigation efforts is a cornerstone in the development of the National Volcano Early Warning System.