PUNA, Hawaiʻi - Councilwoman Jen Ruggles hasn't been participating in county council meetings, but she has been busy reporting alleged war crimes in Hawaiʻi. 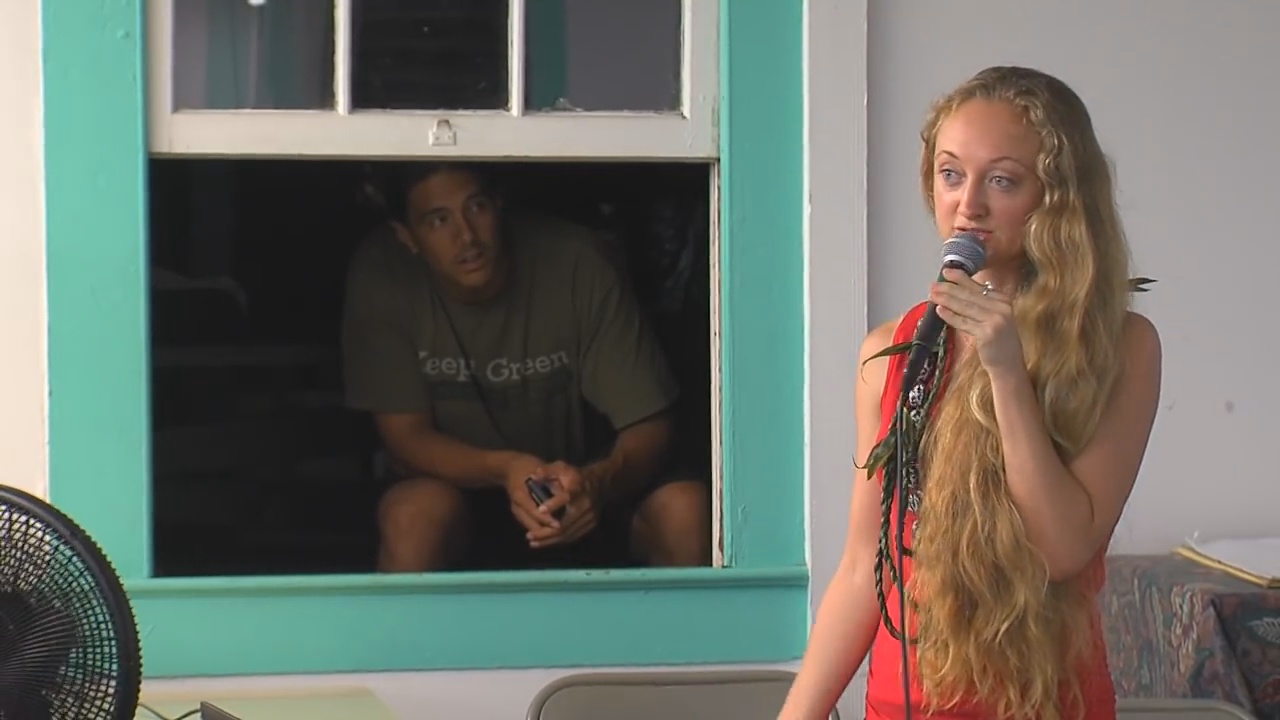 A resident peers in through the window of Keaʻau Community Center on September 24 as a standing-room only crowd came out for Councilwoman Jen Ruggles’ first community meeting since making her announcement.

Councilwoman Jen Ruggles has not been participating in County Council meetings, but she has been busy reporting on alleged war crimes in Hawaiʻi.

RUGGLES: “I’d like to announce that I retained an attorney to consult with Corporation Counsel.”

Ruggles surprised her fellow council members back on August 21st with an unexpected announcement.

RUGGLES: “Until our County attorney can assure me through facts and applicable law that I’m not violating my oath of office and not incurring criminal liability, I must refrain from an enacting any further legislation.”

The decision was divisive.

AARON CHUNG (Hawaiʻi County Council): “Right, but… So what is your position?”

Stirring up the council.

CHUNG: “A no vote is still some validation of the legitimacy of this board.”

TESTIFIER: “I demand that this body immediately cease and desist.”

Many testified in her defense.

TESTIFIER: “She should be present, sitting there, but allowed to abstain from voting for her reasons.”

TESTIFIER: “It’s called pillaging against the Hawaiian Kingdom which has been proven that is in continuity. I want some answers.”

Since then, her council seat has been empty, although she has not resigned her office.

RUGGLES: “So, what does this mean for my job? Now, considering that he did not dispute that Hawaiʻi is illegally occupied? This means that Corporation Counsel has forced me into the position of being a
whistleblower.”

In her first community meeting since her announcement, Ruggles said she was putting Hawaiʻi institutions on notice.

RUGGLES: “War crimes include acts of commission as well as omission. In this case, the crime of omission is the abrogation of Queens Hospital’s free health care to aboriginal Hawaiians as protected persons as mandated in their charter before the overthrow, is in violation with article 47 and 51 of the Geneva Convention. Therefore, would constitute a war crime. Now, they are on notice.

“I sent 30 letters today via certified mail to every state Circuit Court judge that deals with foreclosures in Hawaiʻi and I say that – that as an agent for the United States – I am bound to ensure respect for the convention in all circumstances and therefore I call upon you to cease and desist in the wrongful taking of lands from protected persons that are under foreclosure. So when we talk about protected persons, we’re talking about United States citizens as well. That doesn’t just include Hawaiian subjects.”

Now, Ruggles is trying to get the Federal Bureau of Investigation involved. Ruggles says she sent a letter to the FBI reporting Queens hospital and Hawaii Circuit Court judges for alleged war crimes.

On October 23rd, Ruggles said she received confirmation that the FBI office in Hawaiʻi received her letter. Since war crimes are felonies, Ruggles says it is the FBI’s primary responsibility to investigate. Ruggles also sent a copy of her letter to the International Criminal Court located in the Hague, Netherlands.

PRESIDENT DONALD TRUMP: “We withdrew from the Human Rights Council.”

The United States, however, has not agreed to be subject to ICC rulings.

TRUMP: “The United States will provide no support and recognition to the International Criminal Court. As far as America is concerned, the ICC has no jurisdiction, no legitimacy, and no authority. The ICC claims near universal jurisdiction over the citizens of every country, violating all principles of justice, fairness, and due process. We will never surrender America sovereignty to an unelected, unaccountable, global bureaucracy. America is governed by Americans. We reject the ideology of globalism and we embrace the doctrine of patriotism. Around the world, responsible nations must defend against threats to sovereignty, not just from global governments, but also from other new forms of coercion and domination.”