HAWAI'I ISLAND - The Puna community is trying to salvage what it can following the destructive eruption of Kīlauea, while the volcano remains relatively quiet. 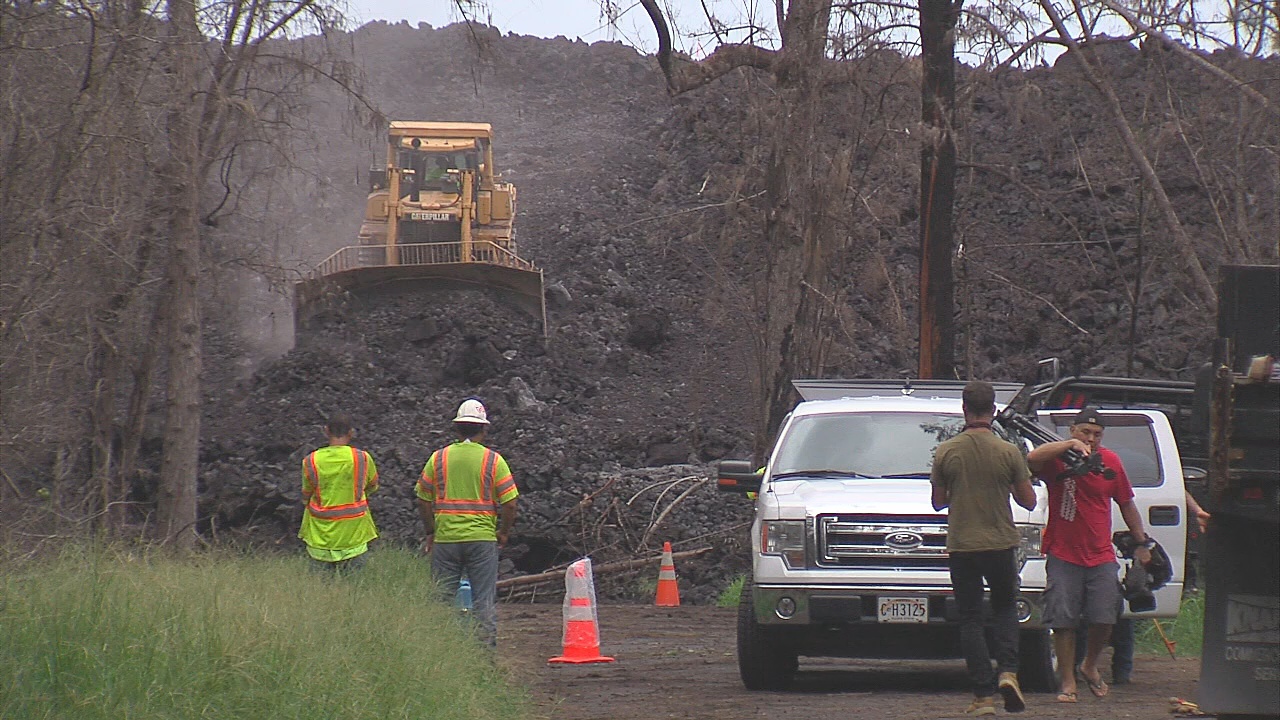 Crews working to forge an emergency access route over the lava blocking Highway 137 near MacKenzie Park.

Kīlauea Volcano is not erupting. The last active lava on the lower east rift zone was seen nearly two months ago. The Puna Community is trying to salvage what it can following the destructive eruption.

On October 19th, crews began work on an emergency access road over the lava that covered Highway 137. The heavy machinery started from MacKenzie State Park, cutting a path north towards Pohoʻiki. The road will only be for the use of residents and landowners who were isolated by the lava flows in May.

Members of the communities who live in the isolated areas on the north side of the lava flow hope to convince the administration to start similar work on Highway 132.

SMILEY BURROWS: “We were communicating about the road being open here.”

A meeting was recently held on a private farm off Beach Road.

RESIDENT: “I want my peace, and my fruit trees, my greenhouses. I’m… there. But I need to get there.”

EILEENOʻHARA: “It’s not an easy task. We all know what that flow looked like. It gouged a riverbed.”

Puna Councilwoman Eileen O’Hara said she is introducing a resolution at the County Council.

OʻHARA: “Its challenging, probably a mammoth task to get that alignment of what we remember is 132, which was a fairly straight shot down to Kapoho. So it would be lovely to recover as much of that easement or right away as possible. But it requires significant engineering studies at this point. So I would like to advocate, and I
am advocating, that the county start looking at those engineering requirements, now.”

LONO LYMAN: “The reality is that putting a road back in is not a quick and easy thing. Lava is pretty darn hot. Once it solidifies, unfortunately, its a good insulator. Looking at the documentation for the realignment of 132, which I did just yesterday, the surveys were done in 1962. But don’t be misled by that. The surveys were to realign it through the 1955 lava flow. The land transfers occurred in 1980. I’m not sure if the alignment occurred before or after that.”

The present discussion is only made possible by the current pause in eruptive activity. Scientists with the United States Geological Survey Hawaiian Volcano Observatory have observed low rates of seismicity, deformation, and gas emissions.

Still, of all the volcanoes monitored by the USGS, Kīlauea is ranked as the number one threat. An updated Volcanic Threat Assessment was just published. Federal officials discussed the document last week during a media conference call.

JOHN EWERT, USGS: “Our threat assessment system looks at 24 factors related to the hazards and broad measures of risk to people, property, and infrastructure. Once the 24 factors were scored for each volcano, the volcanoes were grouped into five categories. Very high, high, moderate, low, and very low threat. The very high threat category: we have 18 volcanoes ranked as very high threat. Now, as in 2005, Kīlauea ranked as the U.S. volcano with the highest threat score. Kīlauea is the most active U.S. volcano. It erupts mainly lava flows but is also capable of producing explosive eruptions. And there are highly developed and populated areas on its flanks. The eruptive activity in 2018 and the impacts we saw from that to Hawaiʻi are clear examples of why Kīlauea is one of our very high threat volcanoes.”

In its weekly Volcano Watch article, the USGS wrote that the recent activity at Kīlauea marked a watershed for science. The summit collapse was the largest since the year 1800. It included the strongest summit explosions since 1924. Only three comparable events have occurred at basaltic volcanoes worldwide in the past 50 years.

The magnitude 6.9 earthquake that struck Kīlauea’s south flank on May 4, 2018 was the largest in Hawaii since 1975. Aftershocks are still being felt, including a magnitude 3.8 quake on October 20th.

Also during the recent eruption, the emission rate of sulfur dioxide gas was the highest ever measured at Kīlauea, and the lava production rate from Fissure 8 was about three times higher than during the 1955 and 1960 lower East Rift Zone eruptions.

The Volcano Watch article said that the summit collapse explosions were a “head-scratcher” in that they were remarkably predictable. Scientists will be working to answer the question: why would such catastrophic events follow a well-behaved pattern?

The article also asks, what comes next? Lava could return to the floor of Halemaʻumaʻu, like it did in July 1924 after the collapse and explosions in May of that year. On the other hand, the article notes that there was no active lava on the volcano for 18 years from 1934 to 1952. So, Kīlauea could stay quiet for decades.