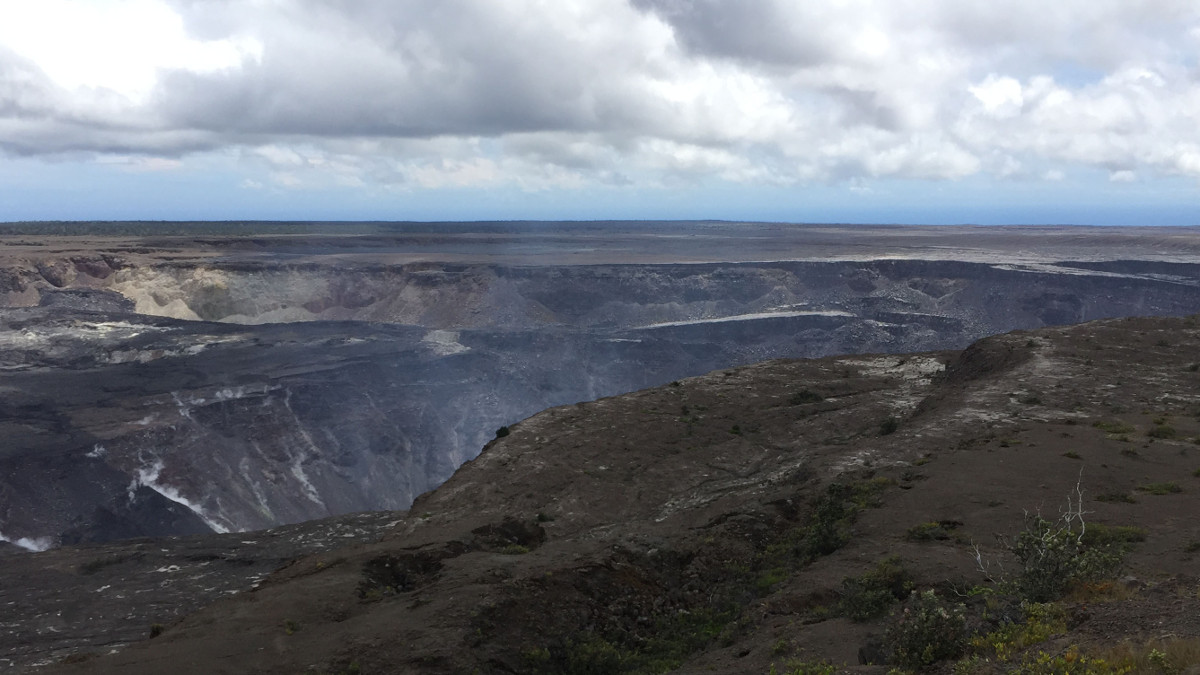 September 19, 2018 USGS photo looking southward of the south caldera of Kīlauea Volcano showing the main collapse area. After the collapse of 1868, the caldera floor may have looked something like this.

HAWAIʻI VOLCANOES NATIONAL PARK - A Kīlauea Volcano summit collapse that occurred 150 years ago had similarities to the 2018 collapse, scientists say. 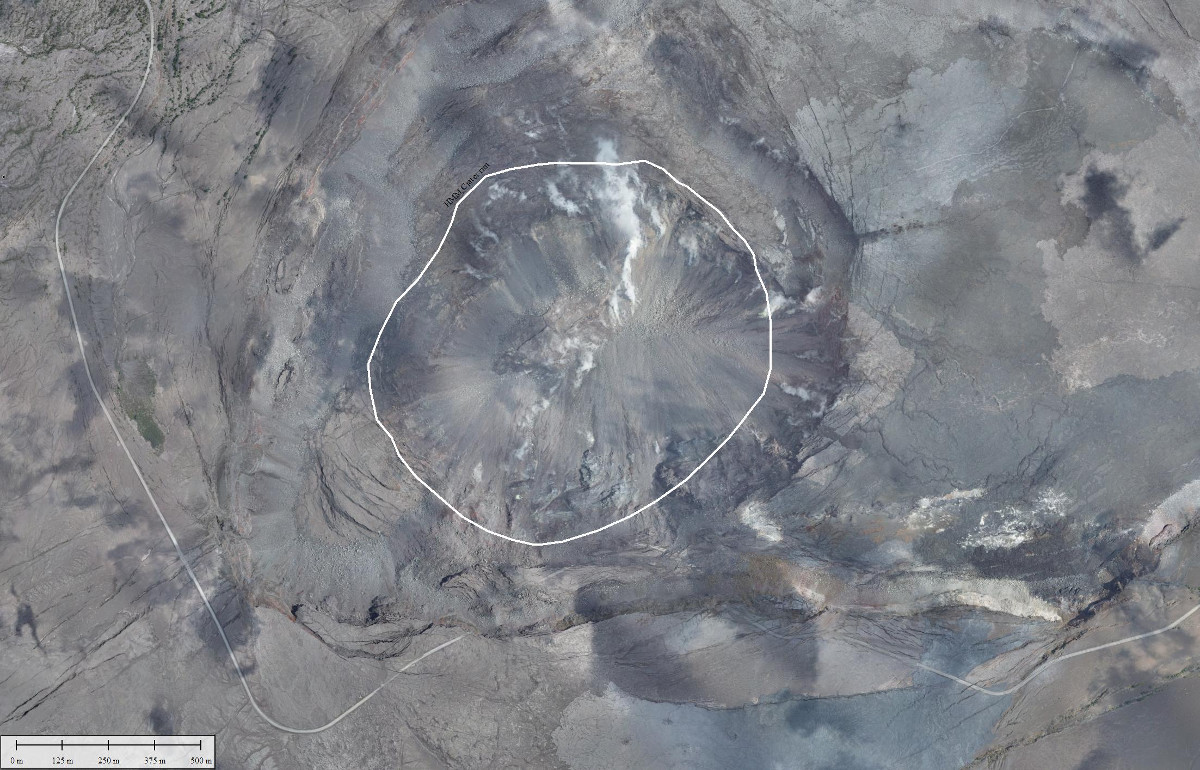 (USGS) This August 11, 2018, aerial photomosaic of Kīlauea Volcano’s south caldera shows how the summit was changed by the collapse events that occurred between the end of May and August 2. The bright white line circles the outline of Halema‘uma‘u as it was before the onset of the 2018 collapses. Closer views of the fuming spots within the collapsed area are shown in the two photos posted below. Note in the lower third of this image the section of Hawai‘i Volcanoes National Park’s Crater Rim Drive (light gray line) that dropped into the crater during the collapse events.

(BIVN) – Kīlauea is not erupting, and while a slight inflationary trend near and east of Puʻu ʻŌʻō suggests that magma may be refilling the middle East Rift Zone, low seismicity and reduced gas emissions do not indicate that the magma is shallow, scientists say.

The prolonged yet dramatic partial collapse of Kīlauea caldera this past summer was the first to be observed in detail and the largest measured by subsidence volume of more than a dozen summit collapses in the past 200 years. The earliest known collapses (1823, 1832, and 1840) were large in subsidence volume but the process was not recorded by witnesses. The most recent collapses (1919, 1922, and 1924) involved smaller subsidence volumes but were witnessed by Thomas Jaggar and his staff at the Hawaiian Volcano Observatory.

The collapse of 1868 was the first collapse after a hotel was established at the Kīlauea summit. Various observers were present for a few days each during the first weeks of the event. The months of March and April of 1868 are most often associated with strong earthquakes and Mauna Loa eruptions. The strongest earthquake, estimated a magnitude 7.9, generated a tsunami and a landslide and also started a collapse of Kīlauea summit.

According to Kaina, a Hawaiian resident of the summit area, Kīlauea Crater had been very active from late January to late March with eight overflowing lava lakes. The lake activity increased greatly and, on March 27 when the first strong earthquakes (possible foreshocks of the M7.9 earthquake to follow) started, the crater floor was covered with lava lake overflows.

On April 2 at a few minutes past 4 p.m., the above-mentioned M7.9 earthquake occurred “which caused the ground around Kilauea to rock like a ship at sea. At that moment, there commenced fearful detonations in the crater, large quantities of lava were thrown up to a great height; portions of the wall tumbled in. This extraordinary commotion, accompanied with unearthly noise and ceaseless swaying of the ground, continued” for three more days as the lava receded. By April 5, there was no lava to be seen in the crater—Pele had left Kīlauea.

The April 2 earthquake also triggered brief eruptions in Kīlauea Iki Crater and in the Southwest Rift Zone. The Volcano House hotel may have suffered a cracked foundation.

William Hillebrand descended into Kīlauea Crater on April 18: “At least two-thirds of the area of the crater towards W. and N.W. have caved in and sunk about 300 feet below the level of the remaining portion of the old floor.” South Lake, near the Halemaʻumaʻu location, “was transformed into a vast pit, more than 500 feet deep.”

“The caving in of the floor seemed to be still in progression, for twice during our exploration of the crater, our nerves were disturbed by a prolonged heavy rumbling and rattling noise, as from a distance platoon fire of musketry.” The collapse of the summit caldera that started on April 2nd was still going on the 18th.

Hillebrand also noticed only the “faintest trace” of the “stifling, sulphurous and acid gases” in the vicinity of lava lakes where those gases were formerly overpowering.

The 2018 sequence of events had some similarities to the 1868 sequence. The level of the Kīlauea summit lava lake had been rising through April of this year and started dropping on May 3 as the Puna eruption commenced. On May 4, a magnitude-6.9 earthquake occurred and on May 16, Kīlauea summit explosive events began. Over the next few weeks, subsidence of the summit caldera floor began and continued for more than two months. Gas emissions decreased dramatically.

The descriptions of the 1868 collapses involving detonations, avalanches of the walls, and sinking of a large portion of the crater floor could also describe many of the 2018 caldera down-drop events; Both the 1868 and 2018 summit subsidence involved a large part of the Kīlauea caldera floor with a deep pit where Halemaʻumaʻu had been. The estimates of the amount of 1868 caldera floor subsidence, between 0.2 and 0.5 cubic km (0.05 to 0.11 cubic mi), are smaller than the measurement of more than 0.75 cubic km (0.18 cubic mi) of 2018 caldera subsidence.

After the 1868 summit collapse and withdrawal of the lava lakes, lava returned for brief moments. The first reappearance was recorded on April 19 for less than an hour. By August and September of 1868, visitors reported that the deep pit was refilling, and the South Lake was active once more.

Kīlauea summit collapses accompanied by lava lake draining are a routine part of the long-term refilling of the current caldera produced centuries ago. Each collapse has been followed eventually by reappearance of lava months-to-years later. We are waiting to see what will happen next.