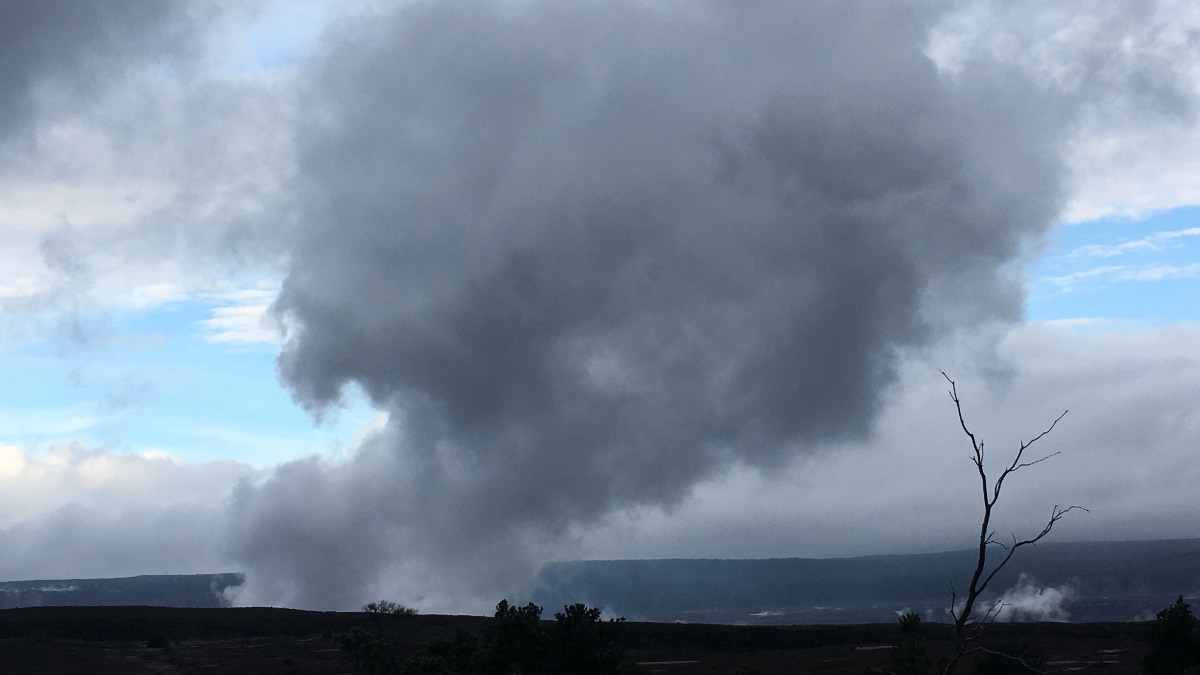 (USGS) Sulfur dioxide and hydrogen sulfide gases themselves are not visible, but dramatic plumes are sometimes visible at Kīlauea Volcano’s summit (shown here) and Puʻu ʻŌʻō. These plumes are a result of atmospheric conditions rather than increased volcanic activity, and frequently occur when warm volcanic gases condense as they are released into cooler air temperatures of early mornings or evenings.

HAWAIʻI ISLAND - A small amount of hydrogen sulfide gas (H2S), "the smelly cousin of SO2", is being produced at Kīlauea, scientists say.

(BIVN) – “We’re giving thanks for clean air, but what’s that new smell?”

That’s the title of the new Volcano Watch, written by U.S. Geological Survey Hawaiian Volcano Observatory scientists and affiliates. The article was posted a little early this week due to the Thanksgiving occasion, and has a holiday aroma, so to speak.

In this season of giving thanks, Island of Hawai‘i residents and visitors can be thankful for the return of good air quality, generally free of volcanic air pollution.

Since the sharp drop in Kīlauea’s volcanic activity and gas emissions in early August 2018, there has been dramatic improvement in the Island’s air quality. The rest of the state can also take comfort in the low levels of volcanic gases, because wintertime southerly winds will have much less volcanic pollution to blow along the island chain.

The main culprit in the formation of volcanic air pollution, or vog, at Kīlauea Volcano is sulfur dioxide (SO2). Since SO2 is released when magma is at a shallow depth (less than 1 kilometer or 0.6 miles beneath the surface), the current lack of activity means that Kīlauea is releasing only a small amount of this familiar gas.

With these much lower emissions, many people have expressed surprise that a strong and slightly unfamiliar smell can be detected from Kīlauea during certain wind conditions. A change in the chemistry of emitted sulfur gases is responsible for this new aroma.

A small amount of hydrogen sulfide gas (H2S), the smelly cousin of SO2, is being produced. With the current volcanic conditions, deeper magma has led to cooler vent temperatures. Without shallow magma to boil off ground water, the sub-surface environment is also much wetter.

These cooler and wetter conditions cause a small amount of H2S to form, in addition to the SO2. H2S is most commonly detected during interruptions in trade wind conditions and in locations downwind of Kīlauea’s summit, Puʻu ʻŌʻō, and the 2018 lower East Rift Zone fissure system.

Sulfur dioxide gas, which produces a sharp pungent aroma like that emitted when setting off fireworks or striking a kitchen match, is noticeable to most people at 0.3 to 1 parts per million (ppm)—0.3 to 1 parts gas in 1 million parts of air. In some sensitive asthmatics, lung function changes have been observed with SO2 concentrations as low as 0.1 ppm, well below the level detected by most human noses.

On the other hand, people can usually smell the rotten egg odor of H2S at lower concentrations ranging from 0.0005 to 0.3 ppm. H2S is present at Kīlauea in tiny amounts, but that little bit can be quite noticeable.

The smell of H2S is a familiar odor to people from hot spring or geothermal areas. It is also produced by decaying organic material (anaerobic digestion) and is released by sewers and swamps. Even the human body produces a small amount of H2S.

According to the Occupational Safety and Health Administration (OSHA), prolonged exposure to 2‒5 ppm may cause headaches, eye irritation, nausea or breathing problems in some asthmatics. Measured concentrations in populated areas around Kīlauea are less than 1 ppm.

Although H2S can be detected by humans at very low concentrations, a person’s sense of smell to the gas is lost at high concentrations. For instance, two to five minutes of exposure at 100 ppm can cause a sensory adaptation known as “olfactory fatigue.” But concentrations of H2S measured at Kīlauea, even directly at volcanic vents, are well below this level.

For those of us who have spent decades living with the familiar aroma of “classic” vog, the introduction of smelly H2S can be curious or even disconcerting. As Kīlauea Volcano’s next chapter of activity unfolds, when magma eventually rises toward the surface, we can expect a decrease in H2S emissions and a return to the more familiar smell of the SO2 and particle-dominated vog.