KEALAKEHE, Hawaiʻi - The future East Hawaiʻi Organics Facility will be located somewhere in Keaʻau, officials say. A draft environmental assessment has been published. 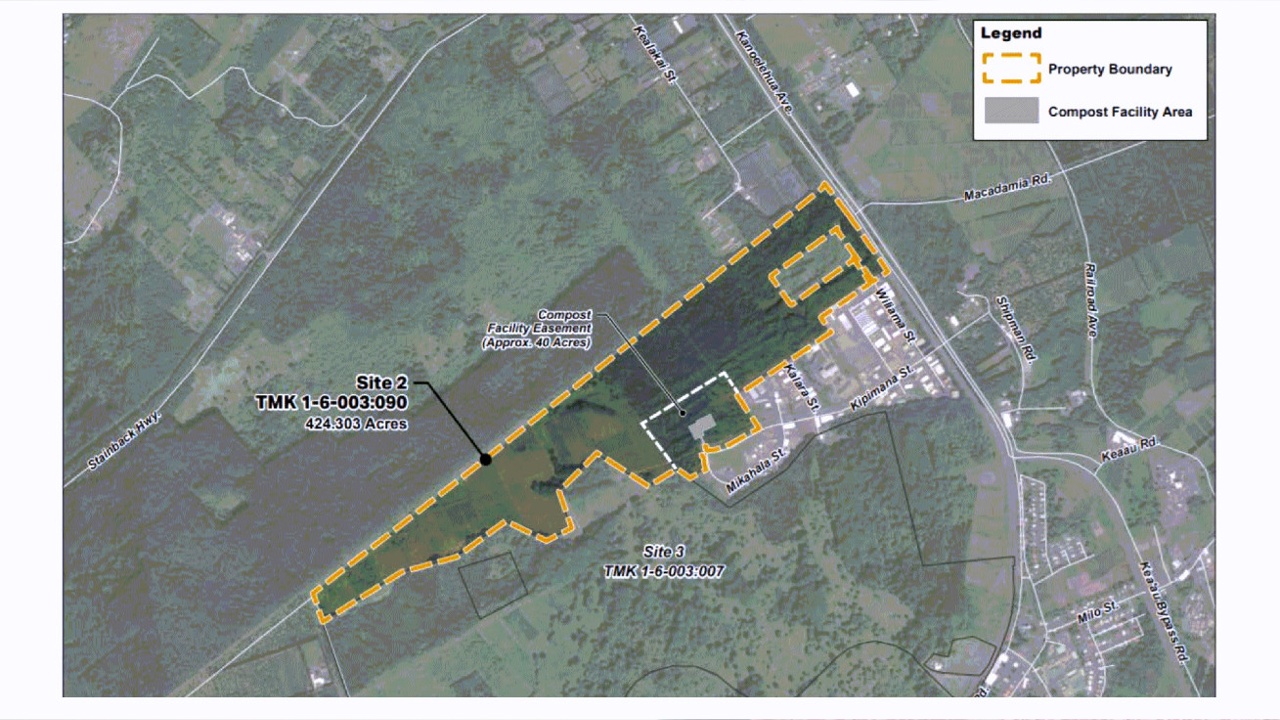 On November 19, the Hawaii County Council got an update on the Environmental Assessment for the future East Hawaiʻi Organics Facility. 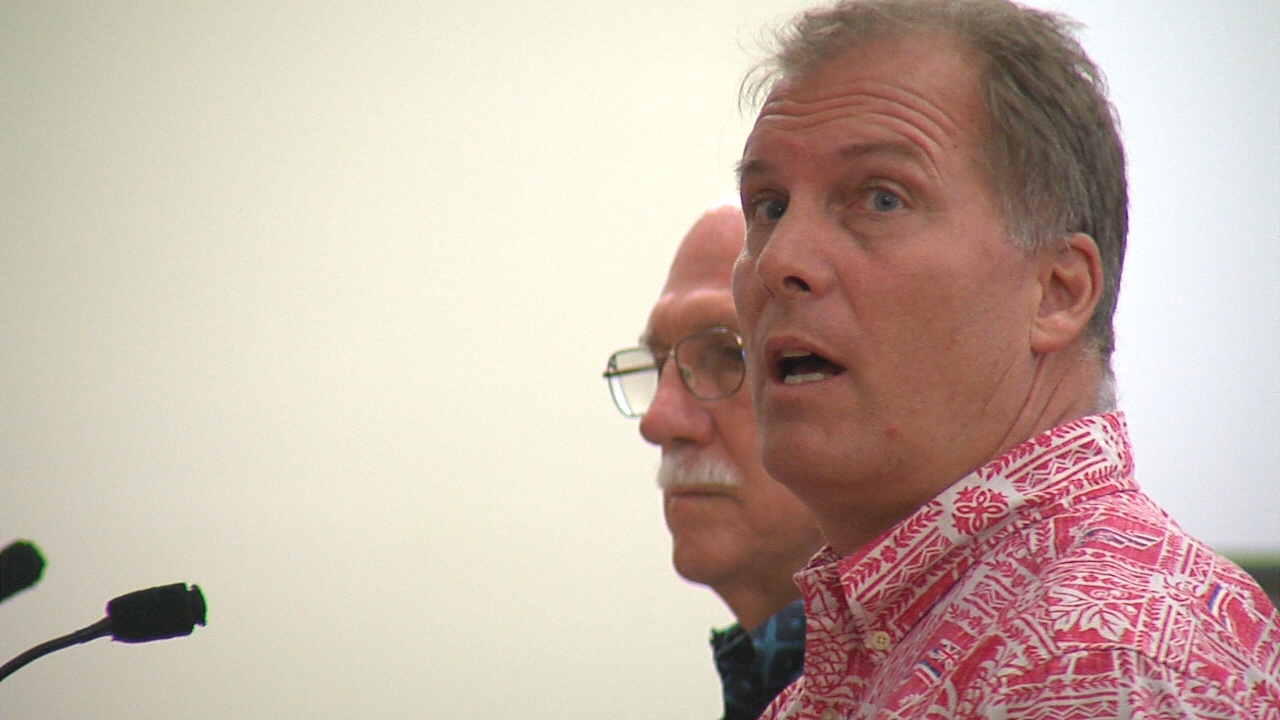 Greg Goodale, the Solid Waste Division Chief for the Hawaiʻi County Department of Environmental Management, delivered the presentation in Kona.

The County picked three sites, all in the Keaʻau area of Puna district, Goodale explained. Two of the sites are adjacent to each other in the Shipman Business Park and the third one is adjacent to the Keaʻau Transfer Station. A consultant, SSFM International, was hired to help do the assessment for those three sites. The site that is on “the Hilo-side of the Shipman Business Park… was a site that was scored the highest and that’s the site that we’re actually currently conducting our environmental assessment on,” Goodale said. 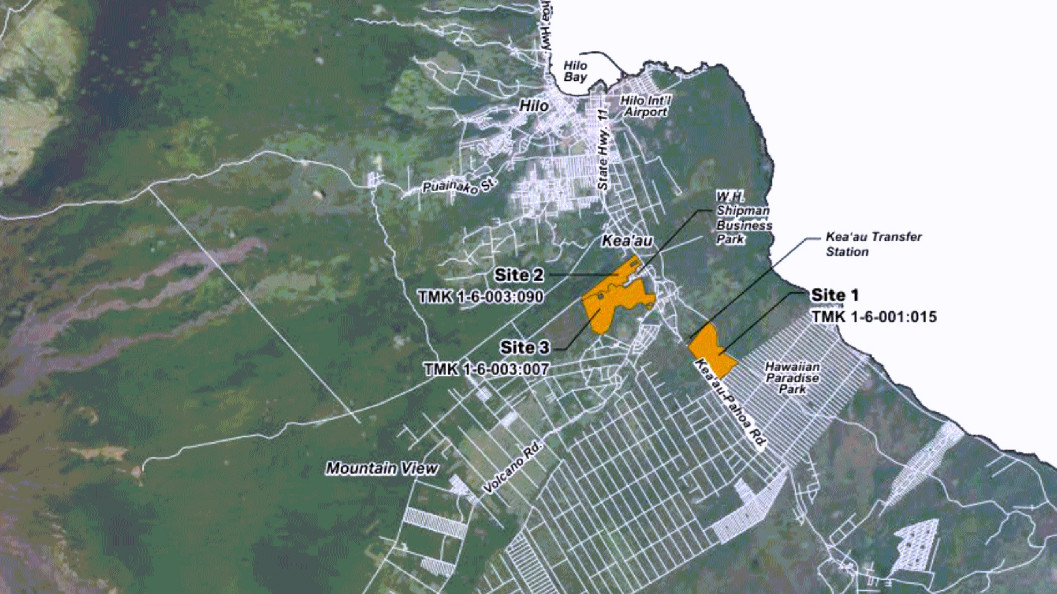 W.H. Shipman has done some clearing at the location. “They’re planning to use part of this parcel to grow papayas,” Goodale said.

The East Hawaiʻi Organics Facility is intended to be a full-scale compost facility and will be able to compost most types of organic wastes, including food waste and contaminated paper. Goodale said, “the facility is expected to significantly reduce the amount organics that would enter into the landfill. Organics from the West Hawaiʻi Organics Facility would be brought over to the East Hawaiʻi Organics Facility for composting.” Those materials would include food waste and also any types of contaminated paper, Goodale said. “If you think about things like pizza boxes, or anything that really kind of came in contact with food – those cannot then enter into the regular recycling stream. So this will give a place for a lot of that type of material to go.” 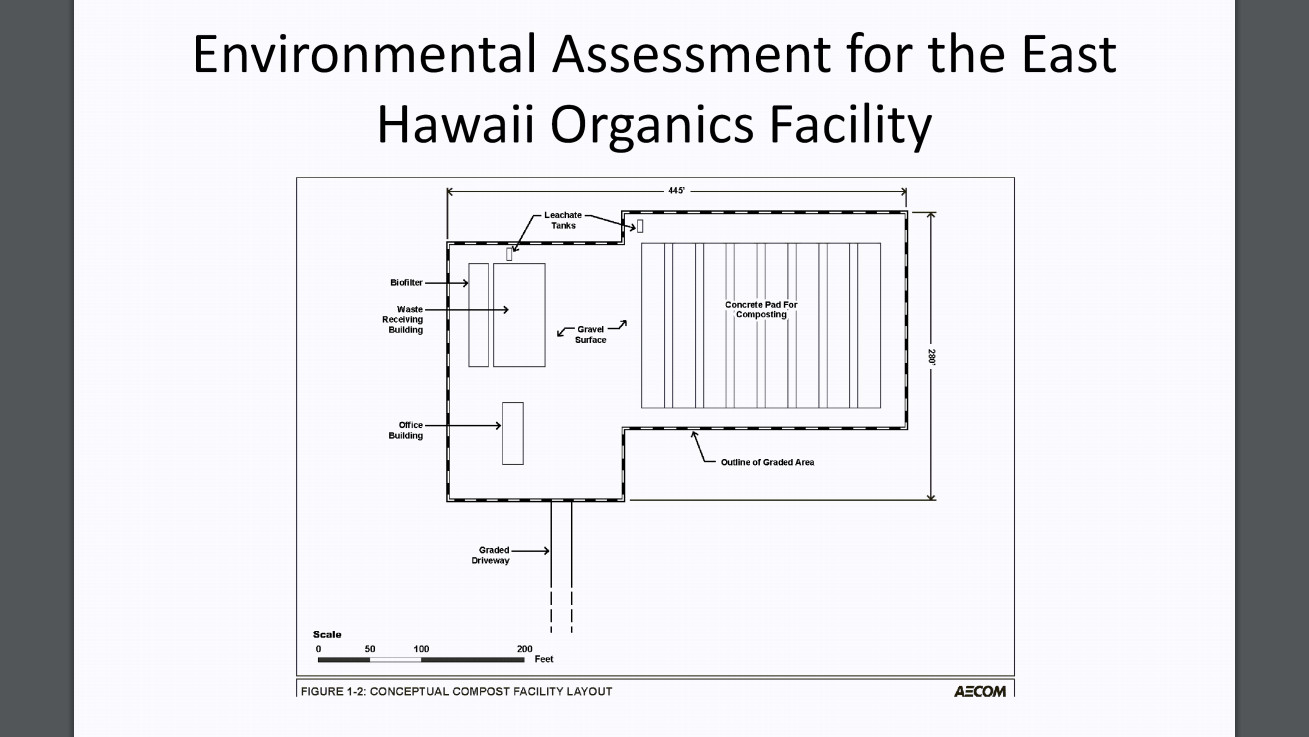 Goodale switched to another slide showing the general layout of how the facility may be configured. “What those rectangles on the right-hand side represent would be the the wind rows that the material would get put into.”

An in-vessel compost facility, underneath “what would look like a big tarp” will be made out of a Gore-Tex type material, Goodale said. “They have oxygen sensors, they have temperature sensors, they have an actual blower that blows air through the pile.” 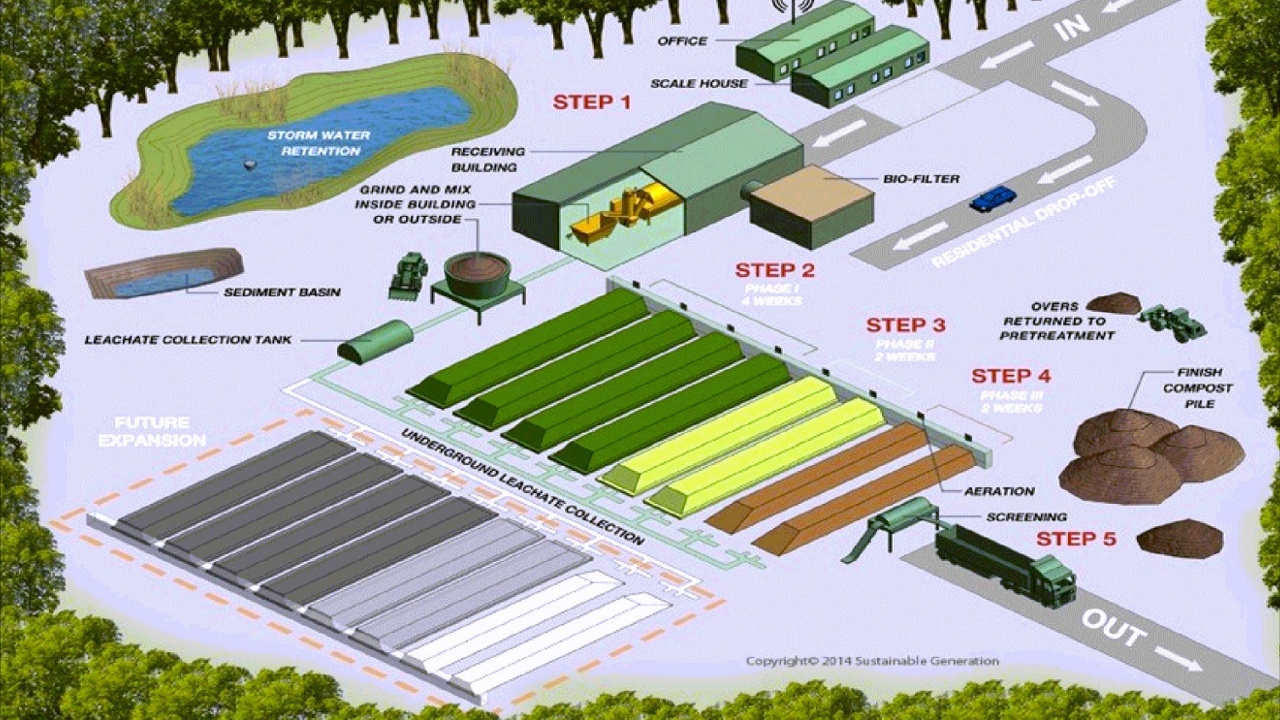 “One thing I want to point out,” Goodale said, “if you can kind of see where there’s… a large building, and then there’s like a yellows machinery in there – that’s where all the material is actually going to be taken in. So everything that’s taken in from any type of trucks dropping off materials, it’s going to dump to an indoor-type facility. It’s not just happening out in the open.”

“Should a finding of no significant impact be determined for the site, the county would then begin the process of negotiating with the owner of the property, W.H. Shipman, for a lease on the facility,” Goodale told the council. “Our expectation is we’ve given the contractor a notice to proceed for the design of the West Hawaiʻi facility but once we can get a FONSI for the East Hawaiʻi facility then we would give them the similar type of notice to proceed with designing the facility for East Hawaiʻi.”

“So we’re going to haul the food waste to East Hawaiʻi, did I hear all that?” asked councilmember Tim Richards.

“Any food waste – or that contaminated paper – mixed with the mulch, would get transported on the return trip with the trucks and trailers heading back to East Hawaiʻi,” Goodale answered. 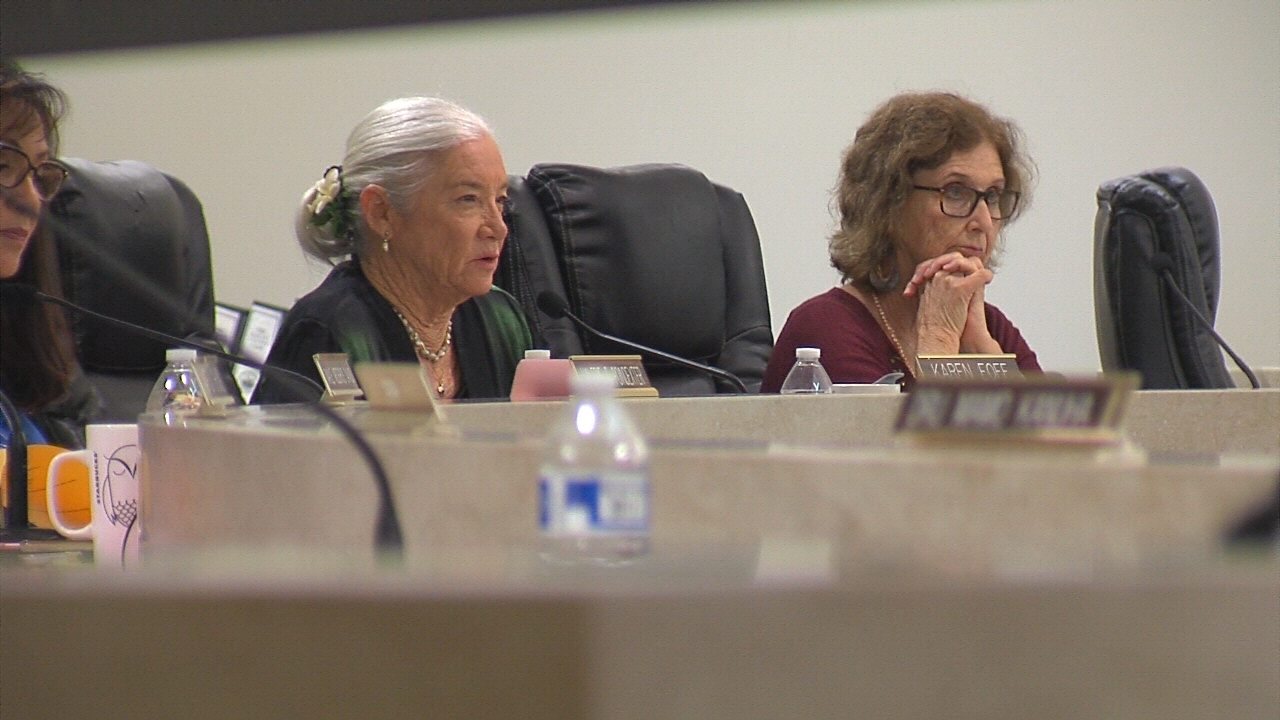 “Would you still be making the mulch at West Hawaiʻi, though? As opposed to the full-on composting?” Kona councilwoman Karen Eoff asked.

“Yes, part of the contract we have with our our contractor is that they would still continue to have mulch available… on both sides of the island, in both East Hawaiʻi and West Hawaiʻi,” Goodale said “So yes, there will be mulch at Kealakehe and West Hawaiʻi landfill, both.” Goodale added that the finished compost will also be provided to West Hawaiʻi.

“The contractor is required to handle the distribution which means they’re gonna have to bring compost to the West Hawaiʻi facilities,” Goodale said. “They’re responsible for doing the marketing and distribution of all the material.”

There would be a cost for the compost, Goodale affirmed. “The contractor is going to be responsible for setting whatever the price they believe… they can sell the material,” he said. “There was a lot of research that went into this ahead of time. There’s a lot of folks on this island that are utilizing compost that is being imported in from outside of Hawaiʻi and so we know there’s a demand for this type of material.”