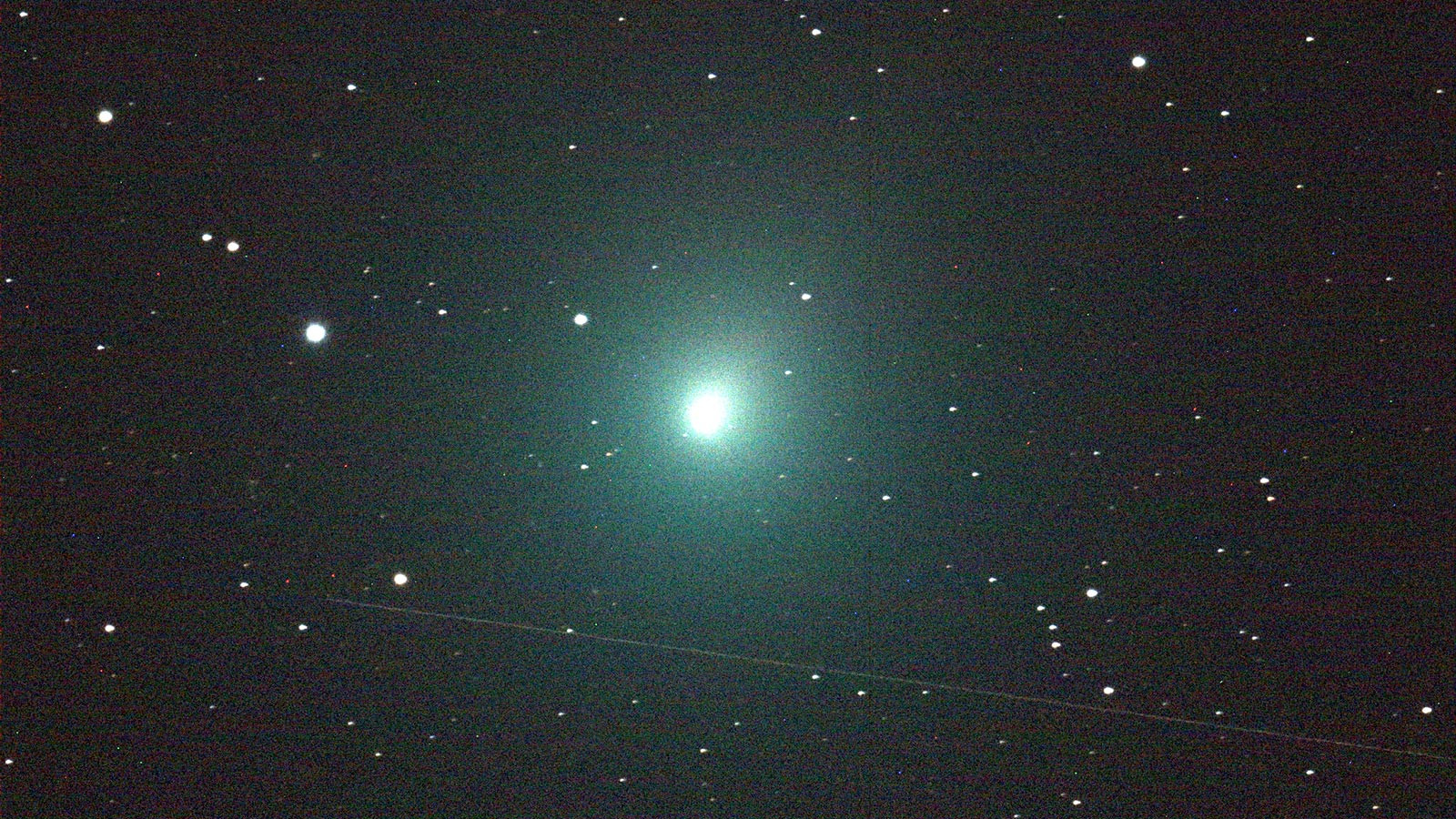 This 120 second image of the comet was taken Dec. 2 by an iTelescope 50 mm refractor located at an observatory near Mayhill, New Mexico. The streak below the comet was produced by a rocket body (upper stage) passing through the telescope’s field of view during the exposure. Credit: NASA

(BIVN) – Astronomers have observed the historic flyby of Comet 46P/Wirtanen using an upgraded instrument from a Mauna Kea-based telescope.

The comet hunters were led by Boncho Bonev, Physics Research Assistant Professor at American University. They completed their two-night observation of the comet as it made its long-anticipated closest approach to Earth. “It is very exciting because the comet is so close and sufficiently bright for detailed astronomical studies,” said Bonev. “Comet Wirtanen is only 30 lunar distances from our planet, meaning that it is about 30 times the distance to the moon. That is nothing compared to the vast distances astronomers typically work with.”

The researchers used the observatory’s recently upgraded Near-Infrared Spectrograph, or NIRSPEC, for the first time on a comet. The improvements were specifically completed in time for the comet’s historic flyby, the W/ M/ Keck Observatory says. Spectra of Comet Wirtanen was captured within just the first scan, marking first science for the new NIRSPEC. Video footage captured the busy scene at the Keck headquarters in Waimea during the December 16-17 observing run.

“In the two decades since we delivered NIRSPEC to Keck Observatory in 1999, the technology for digital infrared cameras has greatly improved,” said UCLA Physics and Astronomy Distinguished Professor Ian McLean, the original principal investigator who was instrumental in commissioning NIRSPEC at Keck Observatory in 1999. “So we installed more sensitive detectors, replacing the digital imaging devices, along with other mechanisms and optics, with brand new ones to give the instrument a new lease of life.”

“It’s very sensitive. The new detector will allow us to see about an order of magnitude fainter objects in the sky,” said NIRSPEC Instrument Master Greg Doppmann, an astronomer at Keck Observatory. “It has the new Hawaii 2RG Teledyne chip so it has more pixels – the pixels are smaller and they’re much more sensitive – which means much more improvement in the results we get when we operate NIRSPEC on the telescope.”

“We’re excited about the NIRSPEC upgrade,” said Keck Observatory Chief Scientist John O’Meara. “It’s going to produce amazing gains in efficiency. You can look at many more objects or get better data for the same amount of time on the sky. It’s like doubling the gas mileage on your car.”

Bonev’s team is looking for prebiotic molecules, such as water, ammonia, hydrocarbons, and other organic compounds that are said to be the “precursor ingredients to forming life.”