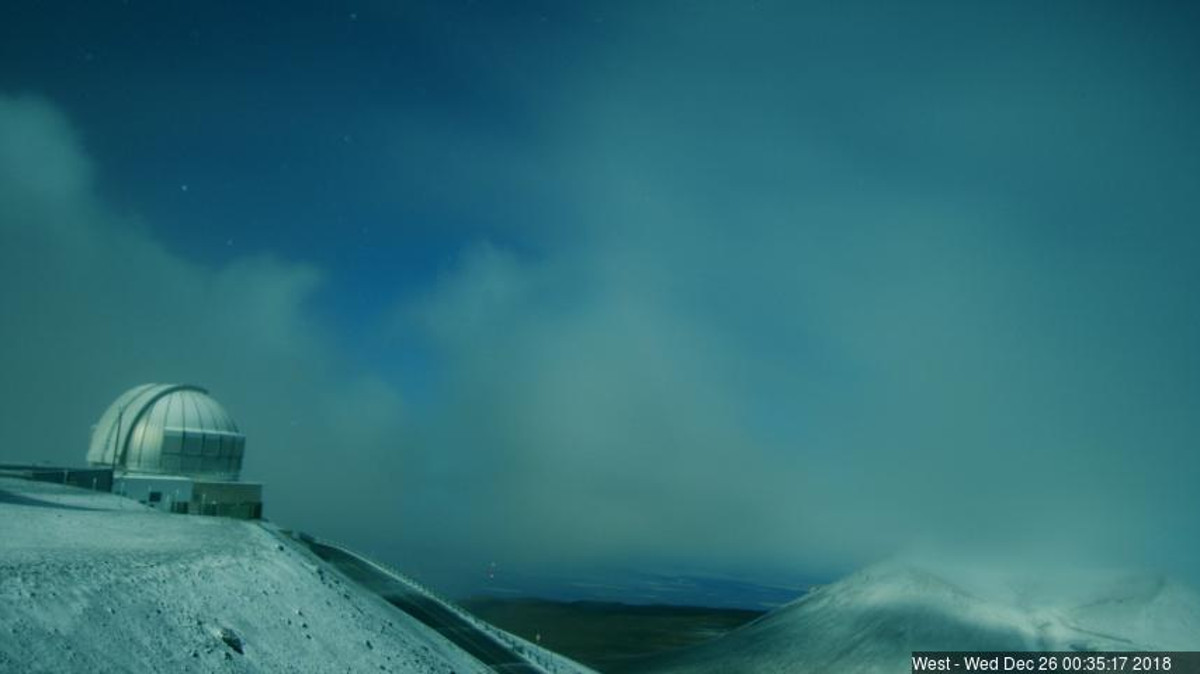 MAUNAKEA, Hawaiʻi - A thin layer of snow accumulated on the summit of Mauna Kea overnight. 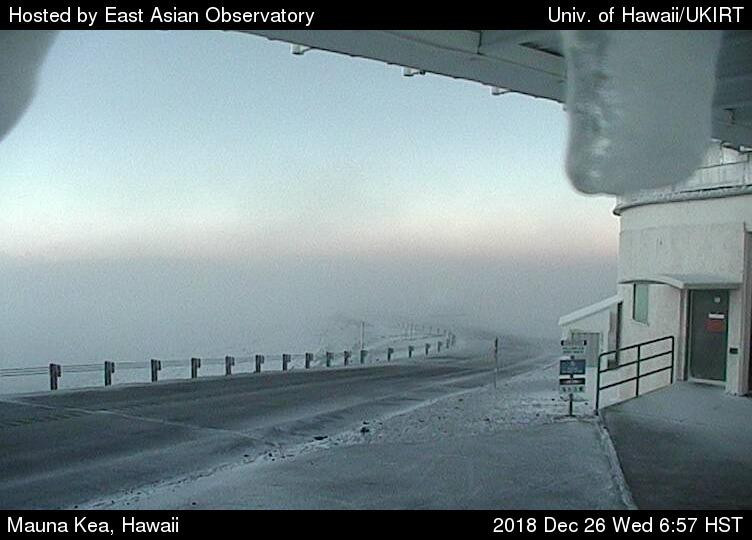 (BIVN) – Hawaiʻi summits had a White Christmas after all, technically, but no one saw it unless they were keeping an eye on Mauna Kea webcams.

The few snow showers that forecasters said were possible over the highest peaks of Mauna Kea and Mauna Loa on December 25 materialized as the sun set. For most of that time, the summit of Mauna Kea was shrouded in thick cloud cover. The fog lifted this morning, offering a glimpse of the snow on Wednesday morning.

The road to the summit of Mauna Kea is closed to the public at the Visitor Information Station at the 9,200 foot level, ranger said this morning, due to snowfall, icy roads, high humidity and below freezing temperatures. Rangers say they will continue to monitor road and weather conditions and this report will be updated as conditions change.

As for the weather outlook around the state, the National Weather Service had this to say in its morning discussion:

Although the better instability associated with an upper trough remains north and away from the state this morning, plenty of low-level moisture in place along with light to moderate southeast low-level flow will support localized heavy rainfall into Thursday. Satellite-derived precipitable water (PW) imagery and recent upper air soundings reflected this wet pattern with above average values for this time of year (1.4-1.6″). Winds will steadily trend down as a cold front and upper trough approach the region today, which will be enough for land and sea breeze conditions to become established for some areas (especially for Kauai/Oahu). This will translate to a more diurnal pattern with the better rainfall potential setting up through the afternoon periods through Thursday.

Guidance remains in decent agreement Thursday through Saturday and shows an amplifying upper pattern setting up over the region featuring a sharp upper trough digging southeastward over the state beginning Thursday night. The upper trough may be sharp enough for an upper low to pinch off near or just south of the islands Friday into the weekend. This combined with its attendant cold front moving over the islands and stalling through this time will keep the chances for heavy rainfall and flooding as the primary forecast concern. Additionally, upper height falls destabilizing the airmass combined with the surface boundary and deep moisture will support thunderstorms, especially over the northwest islands.

Improving conditions will be likely by the end of the weekend and into early next week as the previously discussed front diminishes and high pressure builds to the north. Drier conditions along with a more typical trade wind pattern will be likely.