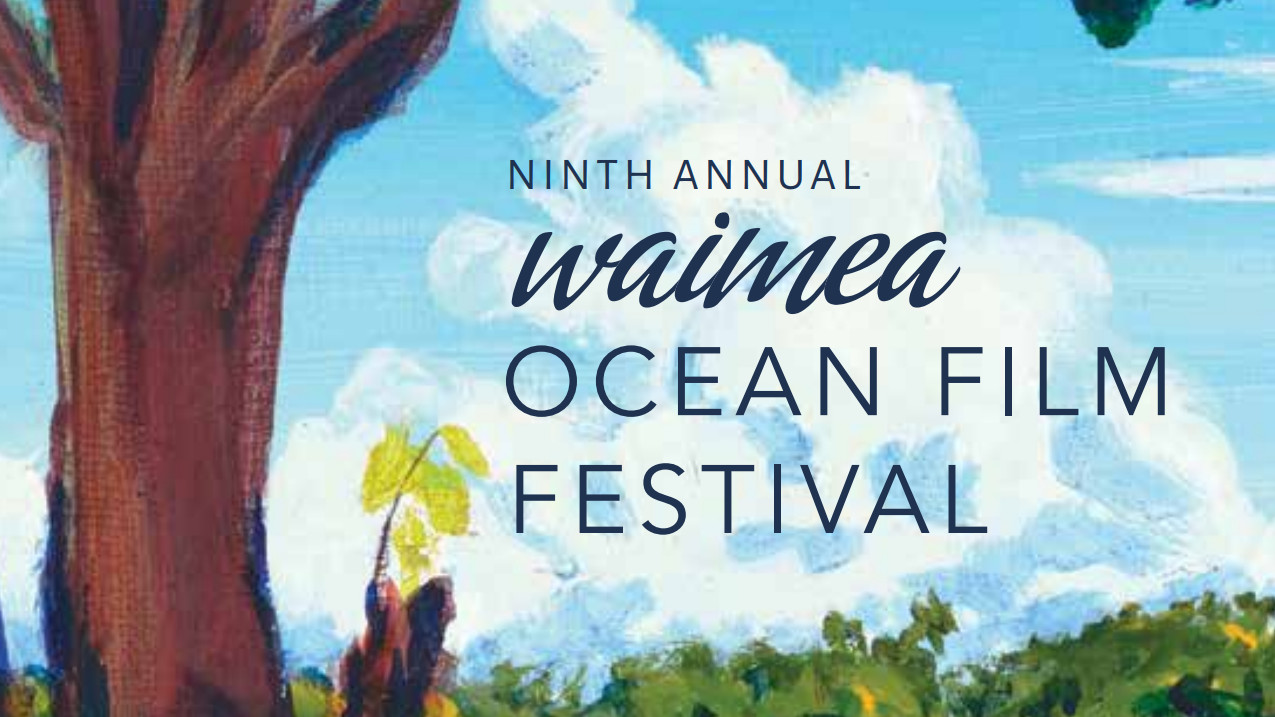 inset mage of the program cover

WAIMEA, Hawaiʻi - Over 60 films will be shown at different locations around South Kohala during the first week on the new year.

The New Year marks the start of the 2019 Waimea Ocean Film Festival. From January 1st through January 9th, the ninth annual festival will present a line up of films, special guests, intimate coffee talks, Q&As, and exhibits.

Organizers say films will be shown starting 10 a.m. on New Years Day, and play simultaneously January 1-4 at multiple venues in Waimea (Kahilu, HPA Gates and Parker theatres), plus at the Fairmont Orchid Resort. The festival moves to Four Seasons Resort Hualalai the morning of January 5 and continues through January 9.

Most of the films showing at the Waimea Ocean Film Festival will be world, U.S., Hawai‘i or Big Island premieres, with many filmmakers in attendance to answer questions.

From the festival organizers:

Anthony Geffen, founder and CEO of Atlantic Productions, brings an extraordinary series on flight to the festival. Geffen worked 10 years for the British Broadcasting Corporation (BBC) before establishing Atlantic Productions in 1992. He has garnered over 50 international awards for his work, including multiple British Academy Film Awards (BAFTAs), multiple Emmy Awards and the Sir Charles Wheatstone Award for outstanding contribution to film and television. Geffen brings David Attenborough’s Conquest of the Skies to the festival, along with Hawaiʻi premieres of Apollo 13; Judi Dench: My Passion for Trees; David Attenborough’s Natural History Museum Alive and a special presentation of The Coronation, released while Geffen attended the festival last year. Geffen also shares a fascinating presentation on his past and future work, including recent productions with David Attenborough and his immersive film project with the late Stephen Hawking.

Paul Baribault, a vice president at Walt Disney Studios Motion Pictures, brings a special early screening of Dolphin Reef, plus will share about the upcoming release of Penguins, slated for the spring. Baribault leads Studio Marketing Operations and Strategy for Pixar Animation Studios and Disney Animation Studios films. He also leads the Disneynature film label as the Brand, Creative, Marketing and Production Lead. Baribault has overseen a range of films in this role, including Incredibles 2, Finding Dory, Frozen, Coco, Moana, Inside Out, Zootopia, Monsters University, The Muppets, Earth, Oceans, African Cats, Chimpanzees, Bears, Monkey Kingdom and Born in China.

Jules Kortenhorst, chief executive officer (CEO) of Rocky Mountain Institute, brings a presentation about the market transition to a clean and prosperous low carbon energy future and also joins the festival for a Breakfast Talk. Prior to RMI, Kortenhorst was the founding CEO of the European Climate Foundation (ECF); served as a member of the Dutch parliament; and worked for 20 years as a corporate executive, both as CEO for International Operations of ClientLogic Corporation and as managing director of Shell Bulgaria.

For a bit of action and adventure, The Weight of Water features Erik Weihenmayer’s quest to kayak through Grand Canyon, having been the first blind person to have summited both Everest and all Seven Summits. Kayaker, adventure filmmaker and producer Harlan Taney, who coordinated all aspects of the production plus served as guide to Erik through the trip, will be on hand to answer questions. Professional kayaker Rush Sturges, known for his signature freestyle moves while going over large drops, along with record-breaking first descents and waterfall runs, joins the festival this year, answering questions following a big screen showing of Chasing Niagara. And, Inside the Indus rounds out the kayaking action.

Adventure filmmakers Bjarne Salén and Tony Harrington also join the lineup, bringing special TBA (To Be Announced) showings of their ski adventure films. Salén shares The World’s Highest Marathon and a special repeat showing of festival award-winner and favorite, Eclipse, to be able to answer questions about its filming. Tony Harrington, founder of the World Heli Ski Challenge, brings a slide show presentation, featuring his best cover shots, and the stories behind them.

For the surf line-up, White Rhino features top, big wave surfers in epic waves, sharing the story of the photographers who capture them in action. Surfing Siberia offers stunning imagery and an interesting story of the surf culture in Russia and its evolution. Rail Road provides a fun surf story with a twist; surfing Europe by train, while Vague à l’Âme chronicles one big wave surfers’ quest for glory beyond having received an award for best wipe out. Emocean tells a quiet, heartfelt and emotional tale of those whose lives have been entwined with the ocean, with filmmaker and photographer Tony Harrington on hand to answer questions, plus provide a sequence of his cover shots in a separate slide show presentation.

Recently formed Red Bull Waʻa—with a hardworking, local, Big Island crew at the core—joins the festival to share a video and stories about paddling, and their quest to win the Molokaʻi Hoe.

James Balog, founder of the Extreme Ice Survey (EIS), whose work was featured in the award-winning film and festival Audience Choice winner Chasing Ice, joins the festival and will give a presentation and update to imagery captured as part of EIS since the completion of the film.

Dr. Drew Harvell joins the festival for a presentation titled Ocean Outbreak: Confronting a Rising Tide of Marine Disease, as she discusses her upcoming book title, Ocean Outbreak. Dr. Harvell currently leads a group of scientists in a National Science Foundation (NSF)-funded study investigating how a changing climate might increase outbreaks of infectious disease in the ocean. Based in part on this work, the book explores the impact from a perfect storm of outbreak conditions caused by human activity.

“The Voyager Exhibit,” opens at Kahilu Theatre with a blessing and ceremony 4 p.m. January 1. Master (Pwo) Navigator and Makali‘i Captain Chadd Paishon leads a discussion sharing background about the journey 10-11 a.m. January 2-4 in front of the Star Compass hanging in Kahilu Theatre. He is joined by other members of Na Kalai Wa’a, as they discuss the upcoming voyage of Makali’i through the Northwestern Hawaiian Islands. The 2019 Voyager Exhibit focuses on three aspects of this voyage: the UNESCO marine heritage site, Papahanaumokuakea Marine National Monument; canoe plants and cordage (rope); and non-instrument navigation and weather forecasting.

Art weaves once again throughout the 2019 festival, as festival artists return to share the experience. Bonnie Cherni offers classes in ocean-inspired origami January 1-4 at the Fairmont Orchid.

As a special extension of the Volcano Art Center’s Hula Arts Program, and as part of the Volcano Art Center Festival Exhibit, Halau Na Kipu‘upu‘u, under the direction of Kumu Hula Micah Kamohoali‘i, will share hula. And, Roen Hufford, daughter of noted kapa maker Marie MacDonald, shares a demonstration of kapa making after a special showing of the film, “Ka Hana Kapa,” along with Q&A with writer Victoria Kneubuhl January 3 at Kahilu Theatre.

Volcano-based block artist Caren Loebel-Fried returns to the festival, sharing a “live documentary” about her time on Midway and a behind-the-scenes look at how she created her recent book, A Perfect Day for an Albatross. Some of Loebel-Fried’s artwork from her book projects will be on display as part of The Voyager Exhibit, as representation of canoe plants. Loebel-Fried will also be available for a booking signing January 3 as well. Photographs by Joshua McCullough, phytophoto.com, are also on display.

Puako-based painter Christian Enns paints en plein air January 2-4 on the beach at Mauna Kea Beach Hotel, offering attendees the chance to observe and gain a sense of his process.

The 2019 program is posted online at waimeaoceanfilm.org, where you can also purchase festival passes. Program copies and film pass sales will be available starting 9 a.m.-5 p.m. Friday, Dec. 29 at the Festival Hospitality Desk at Kahilu Theatre in Waimea, organizers say. You will also be able to find Festival Programs at concierge desks at the Mauna Kea Beach Hotel, The Westin Hapuna Beach Resort, the Fairmont Orchid, Hawai‘i and Four Seasons Resort Hualalai.