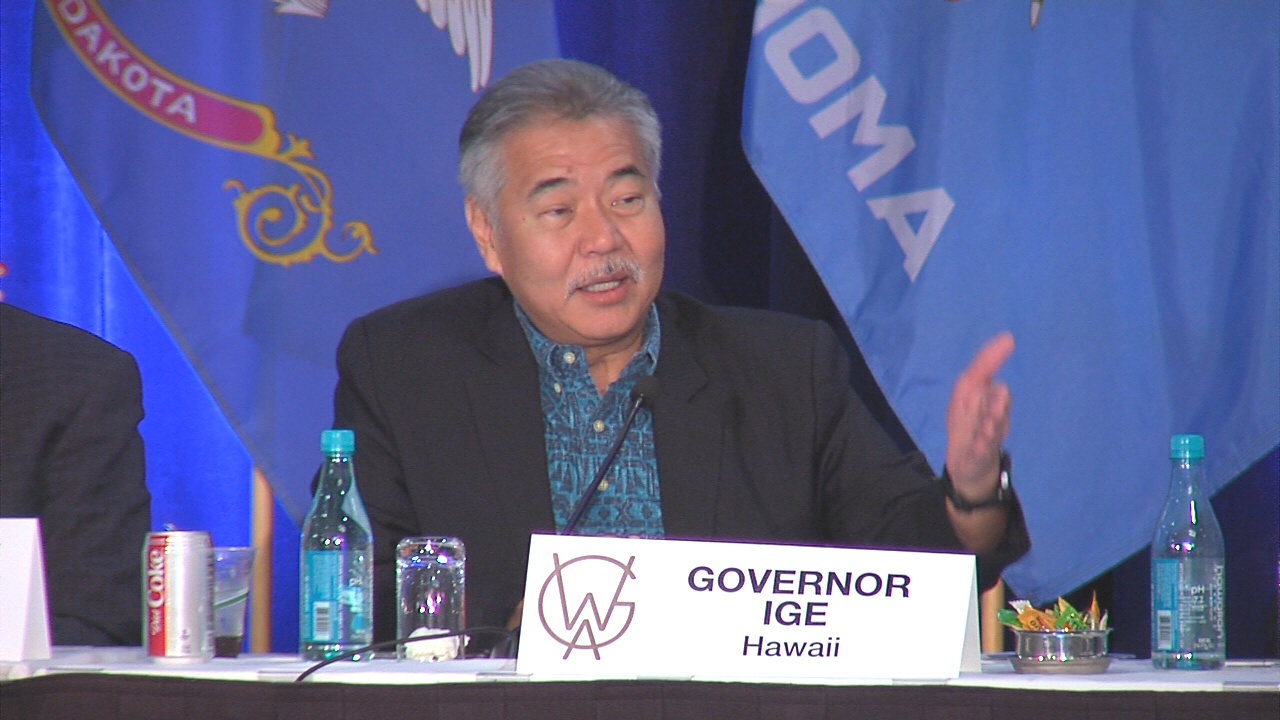 HAWAIʻI - Suzanne Case will continue to serve as the Chair of DLNR, and Bruce Anderson will again serve as health director.

(BIVN) – On Thursday, Governor David Ige announced several executive reappointments at the departments of Health, Human Services, and Land and Natural Resources for his second term.

Bruce Anderson, Ph.D., will continue serving as the head of the health department, and Pankaj Bhanot will again serve as director of the Department of Human Services. Cathy Betts will serve as deputy director of DHS.

Suzanne Case will continue on as Chair of the Hawai‘i Department of Land and Natural Resources, with Robert Masuda remaining as DLNR’s first deputy director.

“The health and wellbeing of Hawaiʻi’s people and natural resources are in good hands with this team of directors and deputies,” said Governor Ige in a media release. “Their commitment to the people, place and culture of Hawaiʻi will carry us forward to an increasingly healthy and sustainable future,” Ige said.

Bruce Anderson, Ph.D., has served as the DOH director since June 2018. He previously served as director of the department from 1999 to 2002 and as deputy director of environmental health from 1987 to 1998 and, prior to that, as the state epidemiologist. He also served as president and chief executive officer of the Hawai‘i Health Systems Corporation. Anderson graduated from Colorado College and received a master’s degree in public health from Yale University and a Ph.D. in biomedical sciences from the University of Hawai‘i.

“I am delighted to have the chance to continue to work with Gov. Ige, his team, and the dedicated staff at the Department of Health. It has been six months since I returned to the department, and I am still very excited about opportunities to improve the health and environment of the people of Hawaiʻi. I feel at home,” said Anderson.

Pankaj Bhanot has served as the director of the Department of Human Services since August 2016. He is an attorney by training who has dedicated his professional life to human rights and human services. He has held a variety of positions within DHS including deputy director, division administrator, employment and child care program administrator, and food stamp employment and training program specialist. Bhanot earned a B.A. in political science from Hindu College, University of Delhi, a J.D. from the Law Centre-I, University of Delhi, and an LL.M. in international human rights law from Cornell Law School.

“I wanted to join Gov. Ige’s cabinet four years ago because I believed in his goal of changing the trajectory of Hawaiʻi. The department of human services is vital to this vision. Because of the governor’s leadership, we have made great strides over the last four years. I’m honored to continue this work with Gov. Ige. I look forward to spending the next four years helping families in Hawaiʻi thrive,” said Bhanot.

The deputy position at DHS is appointed by the director, and Bhanot has re-appointed Cathy Betts to be his deputy. This position is not subject to senate confirmation.

Betts has been the deputy at DHS since September 2017. Prior to this she was the executive director of the Hawai‘i State Commission on the Status of Women. Betts previously practiced law in both the private and government sectors. Betts earned a B.A. in sociology from the University of California, Los Angeles and a J.D. from the University of Hawai‘i William S. Richardson School of Law.

“I am deeply honored and privileged to be reappointed to serve the people of Hawaiʻi. I have great gratitude for this position and a sincere obligation to ensure our families and children are thriving. I would like to thank Director Pankaj Bhanot and Gov. Ige for their faith in my abilities and am looking forward to the next four years of this important work,” said Betts.

Gov. Ige appointed Suzanne Case as Chair of the State of Hawai‘i’s Department of Land and Natural Resources in April 2015. In this role she has focused on good government, inclusion, and implementation of Gov. Ige’s Sustainable Hawaiʻi Initiative. Prior to this, she served as the Executive Director of The Nature Conservancy’s Hawai‘i Program. She also served as Western and Asia/Pacific regional counsel for The Nature Conservancy. In addition, she practiced real estate transactions law at the law firm of Pettit & Martin in San Francisco. Case attended Williams College and Stanford University, where she graduated with a B.A. in History. She received her law degree from Hastings College of the Law, University of California, San Francisco.

“I am very grateful for the opportunity to continue to serve with Gov. Ige and DLNR staff to protect Hawaiʻi’s natural and cultural resources for all of Hawaiʻi. Together we have accomplished a lot these past four years, and we have a clear path forward to take the next important steps for our sustainability into the future, doing our job, the right way, and inclusively,” said Case.

Gov. Ige has also re-appointed Robert K. Masuda to be the first deputy director at DLNR. Masuda has held the position since August 2017, and he previously served in this position from May 2005 to May 2007. Prior to that Masuda served as senior advisor for special programs development at the USDA’s U.S. Forest Service’ Institute for Pacific Islands Forestry. Masuda holds a B.S. in applied behavioral science and group work education from George Williams College and an Executive M.B.A. from the University of Hawai‘i.

“I’m delighted to continue to serve with Gov. Ige and Chair Case as I agree very much with their commitment to Hawaiʻi’s leadership in global sustainability through proper stewardship of our natural and cultural resources. The governor’s respect and appreciation of native Hawaiian values and stewardship of our legacy resources is a reflection of his leadership and character, both much needed in today’s world,” said Masuda.