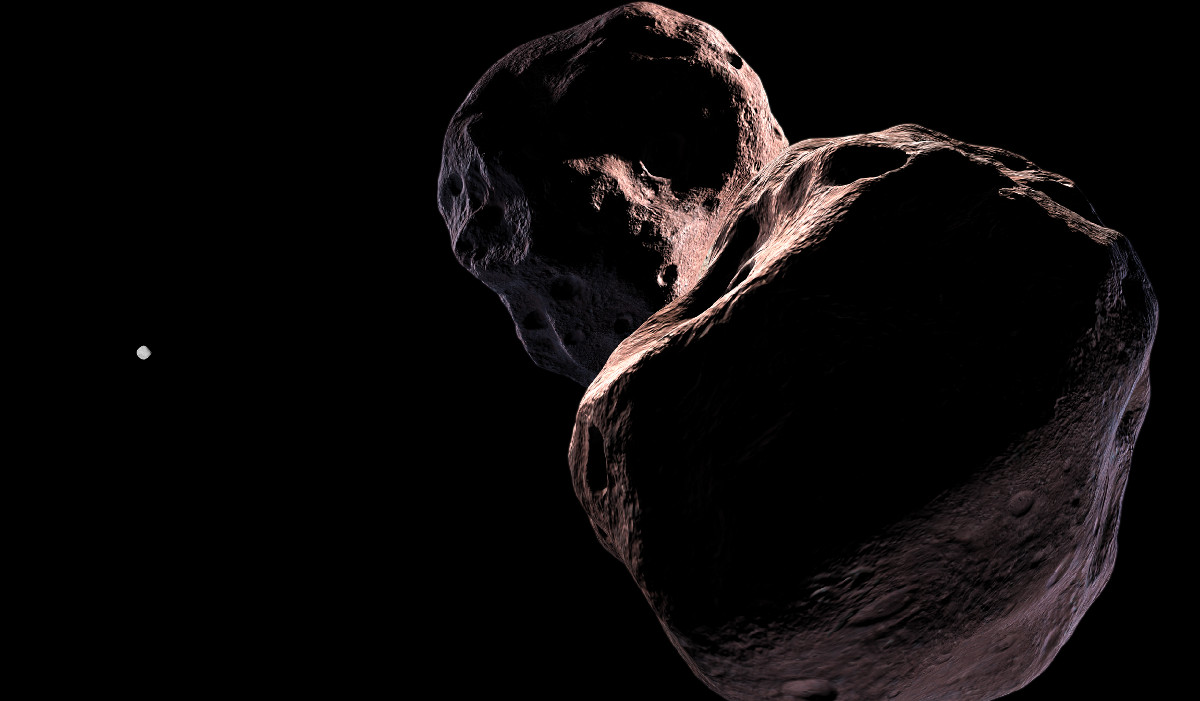 The probe zoomed past the Kuiper Belt object, Ultima Thule, at 32,000 miles per hour, early on New Year’s morning. At closest approach, New Horizons was 2,200 miles away from – what appears to be – the bowling pin-shaped object.

Ultima Thule, or 2014 MU69, is 4.1 billion miles from Earth. By comparison, Pluto was approximately 2.96 million miles away from Earth when it received a New Horizons fly-by in July 2015.

The Kuiper Belt is known as the “third zone” of our solar system, a region beyond the rocky inner planets and the outer giant gas planets. Ultima Thule is considered a member of the “Cold Classical” Kuiper Belt Object, because it appears to be the gravitationally unperturbed and original material of the Kuiper Belt. 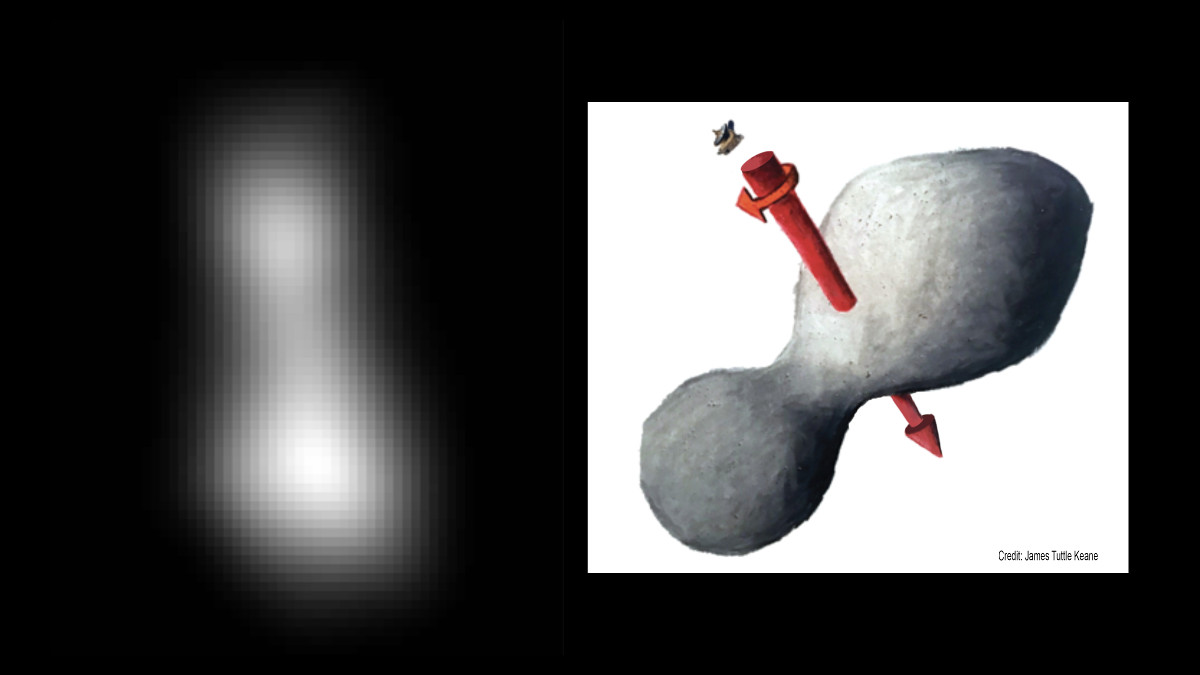 At left is a composite of two images taken by New Horizons’ high-resolution Long-Range Reconnaissance Imager (LORRI), which provides the best indication of Ultima Thule’s size and shape so far. Preliminary measurements of this Kuiper Belt object suggest it is approximately 20 miles long by 10 miles wide (32 kilometers by 16 kilometers). An artist’s impression at right illustrates one possible appearance of Ultima Thule, based on the actual image at left. The direction of Ultima’s spin axis is indicated by the arrows. Credit: NASA/JHUAPL/SwRI; sketch courtesy of James Tuttle Keane

Not only was it the first-ever exploration of a small Kuiper Belt object; no other mission has ever targeted to and explored an object that wasn’t even discovered when it launched, scientists say.

Scientists rejoiced at the Johns Hopkins Applied Physics Laboratory (APL) today at 10:29 a.m. EST, saying the moment ushered in the new era of “exploration from the enigmatic Kuiper Belt, a region of primordial objects that holds keys to understanding the origins of the solar system.”

“New Horizons performed as planned today, conducting the farthest exploration of any world in history — 4 billion miles from the Sun,” said Principal Investigator Alan Stern, of the Southwest Research Institute in Boulder, Colorado, in a news release. “The data we have look fantastic and we’re already learning about Ultima from up close. From here out the data will just get better and better!” 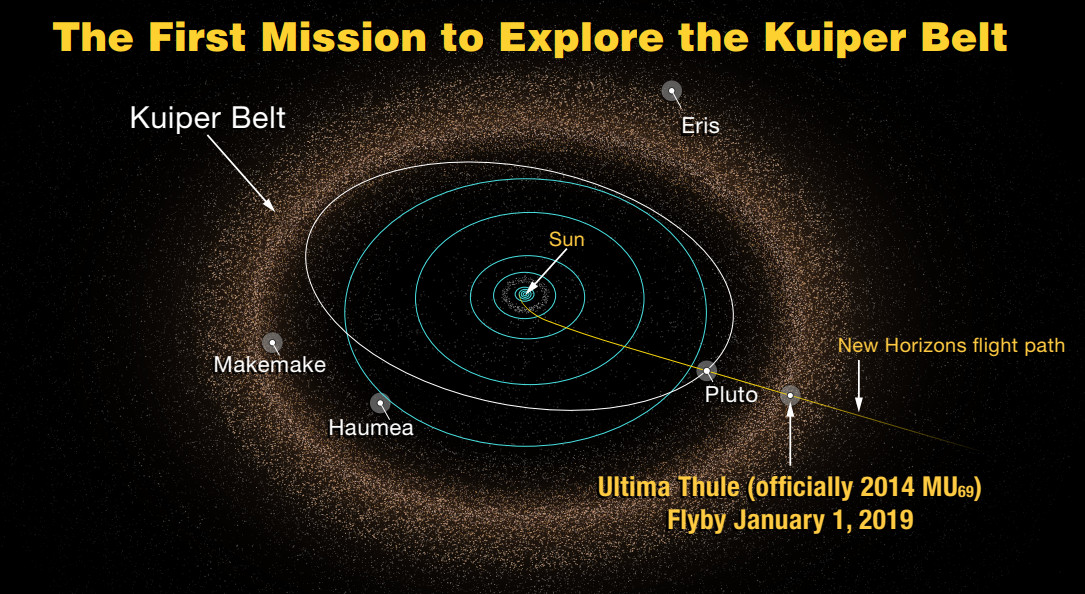 The New Horizons spacecraft will continue downloading images and other data in the days and months ahead, scientists say, completing the return of all science data over the next 20 months.

As it did in during the Pluto visit in 2015, the New Horizons mission has a connection to Mauna Kea on Hawaiʻi Island.

“The first Kuiper belt object was discovered from Maunakea at the University of Hawaiʻi”, said Doug Simons, CFHT executive director. “It seems only fitting that the New Horizons flyby relied upon Maunakea/CFHT data. We are looking forward to the arrival of the high-resolution images in the upcoming weeks.”

Mary Beth Laychak, the Outreach Program Manager at CFHT, was onsite at NASA headquarters to witness the flyby in real time.

As for New Horizons, scientists say the probe will continue studying the Kuiper Belt through at least April 2021, the end of its currently funded extended mission operations.