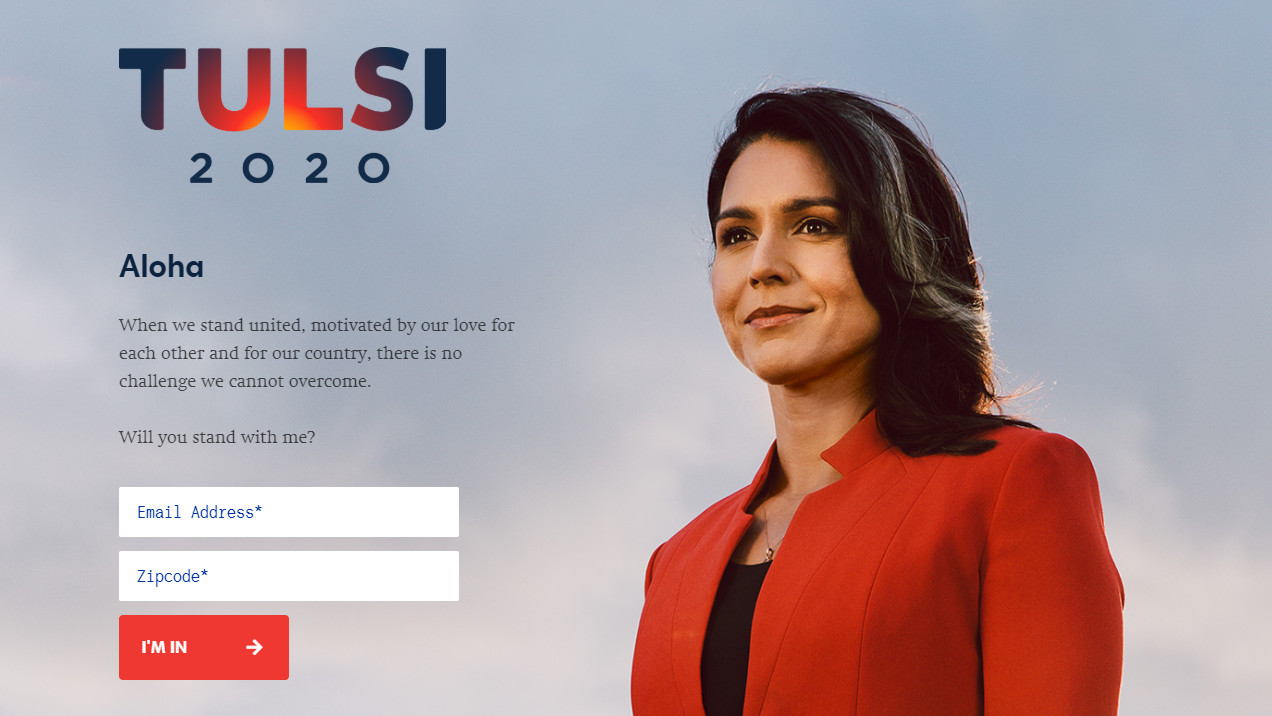 Hawaii Rep. Tulsi Gabbard To Run For President In 2020

HAWAIʻI ISLAND - It's official. Months of speculation ended on Friday when the news of Gabbard's intention to run for president in 2020 hit the media.

(BIVN) – Hawaii Island’s Congresswoman, Tulsi Gabbard, has announced that she will be running for President of the United States in 2020.

“When we stand together, united by our love for each other and for our country, there is no challenge we cannot overcome,” Rep. Gabbard tweeted on Friday afternoon. “Will you join me?” Gabbard employed the hashtag #TULSI2020 in her message, and introduced her presidential campaign website, tulsi2020.com.

Before Rep. Gabbard made her announcement on social media, CNN reported that Gabbard intended to run for the office during an interview slated to air at 7 p.m. Saturday on the network’s “The Van Jones Show.”

UPDATE (7 p.m. HST) – “Earlier tonight I spoke with my friend Van Jones about the challenges we face and the future of our country,” Rep. Gabbard wrote in a campaign email. “He asked me bluntly whether I’ll run for president, and I told him straight: I’ve decided to run and will make a formal announcement next week.”

“There are many reasons I’m offering to serve you as President,” Rep. Gabbard continued, “to ensure every American gets the healthcare they need, to bring about comprehensive immigration reform, to make sure we have clean water and clean air for generations to come, to fix our broken criminal justice system, to end the corrupt influence of special interests in Washington, and so much more.”

“But the main reason I’m running has to do with an issue that is central to the rest — war and peace,” Rep. Gabbard stated. “I look forward to talking with you more about this in the coming days. When we stand together, united by our love for each other and for our country, there is no challenge we cannot overcome.”

Rep. Gabbard is a Democrat and represents the 2nd Congressional District in Hawaiʻi, which includes the Big Island. It is expected that a crowded field of Democrats will vie for the party nomination, challenging Republican President Donald Trump in the 2020 election.

“We’re proud to see a candidate from Hawai’i poised to enter the Presidential race and add to the discourse on the important issues facing our country,” Lopez said. “Our residents are feeling the very real impacts of President Trump’s policies, and it should be every Democrat’s top priority to replace this dangerous administration. Today, working families across our state and country are missing paychecks and facing financial crisis. This critical Presidential election is our opportunity to restore compassion and civility to the White House.”

“Congresswoman Gabbard’s entrance in this race is an opportunity for Hawai’i to continue its rich history of contributing to the diversity of the Democratic Party and be a part of important conversations in the year ahead,” Lopez added.

Big Island Video News will have a deeper analysis, with video, of Rep. Gabbard’s political positioning in recent years, which has served to establish her as a maverick among Democrats.