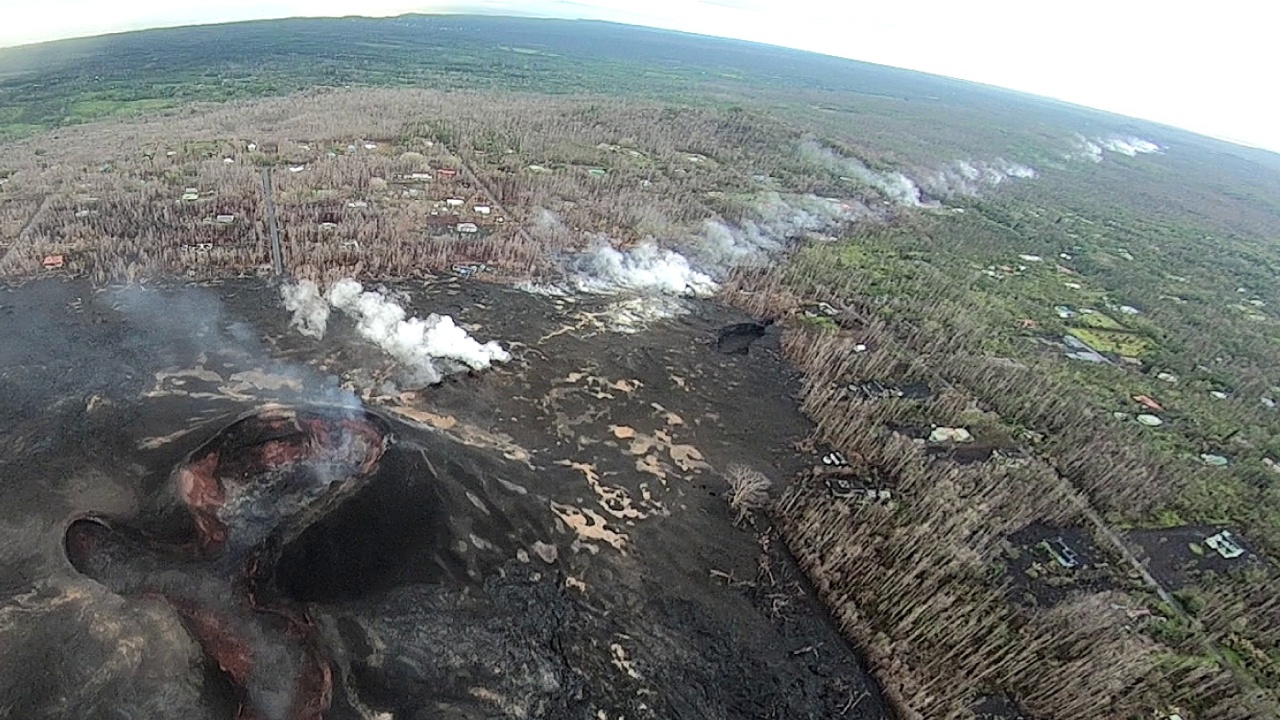 PUNA, Hawaiʻi - The Hawaiʻi Board of Geographic names is planning to establish a Permitted Interaction Group to investigate and make recommendations on the naming of Fissure 8.

(BIVN) – A prominent, volcanic feature created during the recent eruption of Kīlauea has yet to be named.

The Hawaiʻi Board of Geographic Names is planning to establish a Permitted Interaction Group to investigate and make recommendations on the naming of Fissure 8, which – during the summer – spewed high lava fountains in Leilani Estates and sent flows towards the ocean, destroying the village of Kapoho in the process. Like the rest of Kīlauea Volcano, the crater is no longer erupting.

Meanwhile, several more official recommendations have been sent in to the board. January 14 meeting materials show a hui of respected Puna residents with long genealogical ties to the area have submitted their recommendation in writing: they share the name Ahuʻailāʻau.

According to the documents, Kalani Makekau-Whittaker contacted the board on behalf of Piʻilani Kaʻawaloa, Keone Kalawe, and Lei Kaleimamahu, and said the group “had been waiting for the Board to come to Puna before presenting their name proposal(s).” Arthur Buto, the GIS Program Manager with the Hawaiʻi State Office of Planning, recommended “that they not wait, and that they submit their Name Application(s) now.”

Makekau-Whittaker noted that ʻAilāʻau is a “Hawaiʻi deity for the volcano and lava. He predates Pelehonuamea and has been relatively absent from the Kanaka consciousness for generations. The collective experience of numerous cultural practitioners in Puna from the beginning of the eruption who have been face-to-face with the lava on multiple occasions has been filled with sightings, visions, and communication with ʻAilāʻau. He has appeared in dreams of a number of cultural experts and there was a sighting of him in human form at the Pu‘uhonua o Puna. Because ʻAilāʻau’s presence has been so prevalent throughout this eruption with so many people, it is no surprise that the visions received for the name of the fissure include his name.”

There are other official recommendations, as well.

One asks the board to name the fissure from the “bible meaning of number 8.” According to Feeyah Hutchinson of Nanawale Estates, those bibical meanings include the words enoho (regeneration), hanaiʻana (creation), and hou hoʻomaka (new beginnings).

Another recommendation proposes Keahilapalapa, known from a contemporary Hawaiian mele, says Vanessa Lee-Miller of Hilo. “This mele supports Ahilapalapa as an appropriate reference to the Kilauea eruption,” Lee-Miller writes. “A list of other resources such as published legends and newspaper articles dating back to the nineteenth century can be provided upon request whereby the word lapalapa meaning blazing, is referred to as a characteristic of ahi meaning fire, particularly that of a volcanic eruption.”

“Keahilapalapa is also known as a name bestowed upon the highest-ranking ali‘i, supporting its appropriateness as a given name,” she says.

The latest round of recommendations is in addition to the previously submitted Keahiluawalu O Pele by Mahealani Kaiwikuamoʻokekuaokalani-Henry, and Puʻu Leilani from Dale Smith of Nevada.