HILO, Hawaiʻi - There was a sign waving outside the Hilo State Building on Wednesday, in support for organizations who went to the State Capitol to make their voices heard. 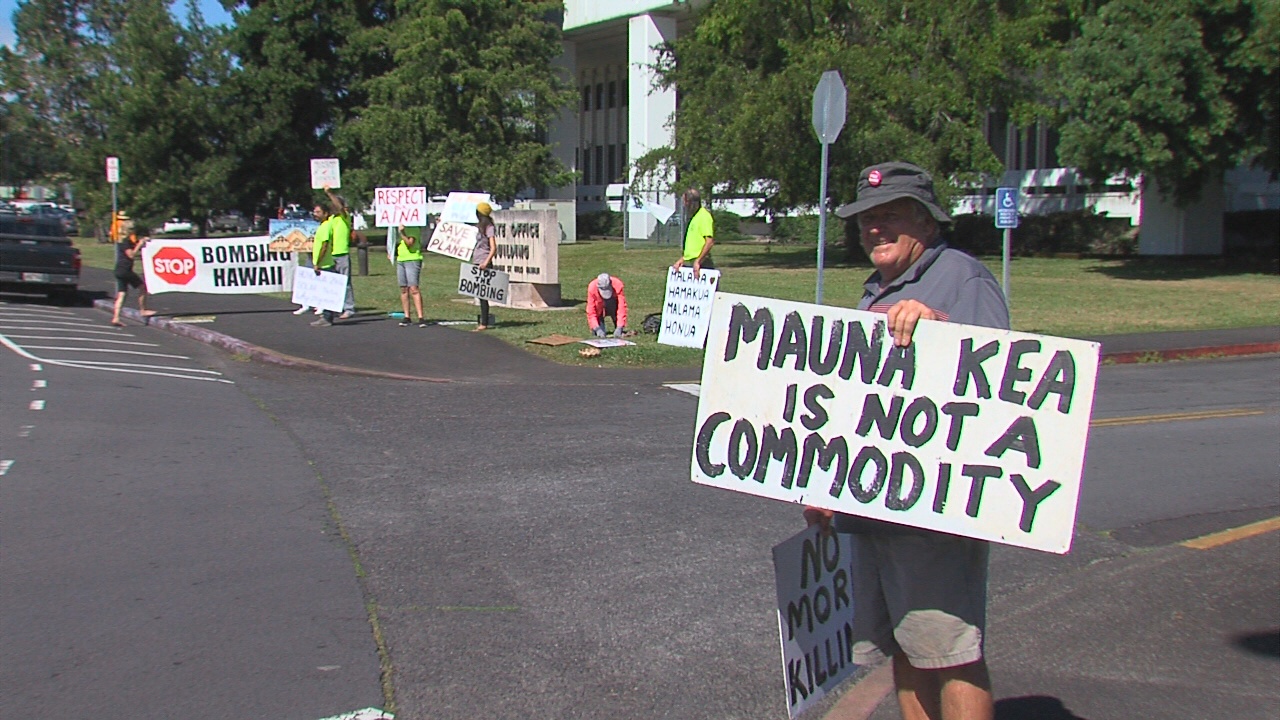 Jim Albertini holds a sign in the foreground, outside the Hilo State Building on Wednesday.

(BIVN) – Activists waved signs outside the State Building in Hilo on Wednesday, marking the opening of the 2019 Legislative Session.

At the State Capitol on on Oʻahu, thousands were expected to attend the Aloha ‘Āina: Ma Uka to Ma Kai (from the mountains to the sea) Educational Rally, in collaboration with the Kuʻi 2019 event at the opening of the legislature. Outside, an above-ground imu cooked the kalo that was to be pounded into poi later on.

On the Big Island, Honokaʻa resident Phaethon Keeney said the groups participating in the Hilo gathering included Malama Hāmākua, 350.org, and Extinction Rebellion, along with other aloha ʻāina advocates.

“The movement for taking care of the land is important to all of us, not just over there on Oʻahu,” Keeney said. “Here on the Big Island we got to show support for that.”

A top issue of concern to Keeney is climate change. “Since the [United Nations Intergovernmental Panel on Climate Change] report came out in October, we’ve been really concerned about that. And that got us looking at our home issues here on the Big Island,” Keeney said. She added that the Hū Honua Bioenergy facility being developed in Pepeʻekeo is of particular concern to her, because the “idea of burning trees for electric is sort of counter productive at this time.”

In his opening day remarks, Speaker of the House Scott Saiki told fellow representatives that, when crafting legislation, the Legislature needs to “view circumstances through the lens of those who are impacted by them,” he said.

“Some of the most contentious issues in Hawaiʻi arise when people believe that government does not consider their perspective or history,” Saiki said. “We need to draw upon the experience, circumstances and knowledge of all our people, and especially those impacted by our work – single working mothers, seniors on fixed incomes, business owners, cultural advocates, and recent college graduates who want to stay in Hawaiʻi.”