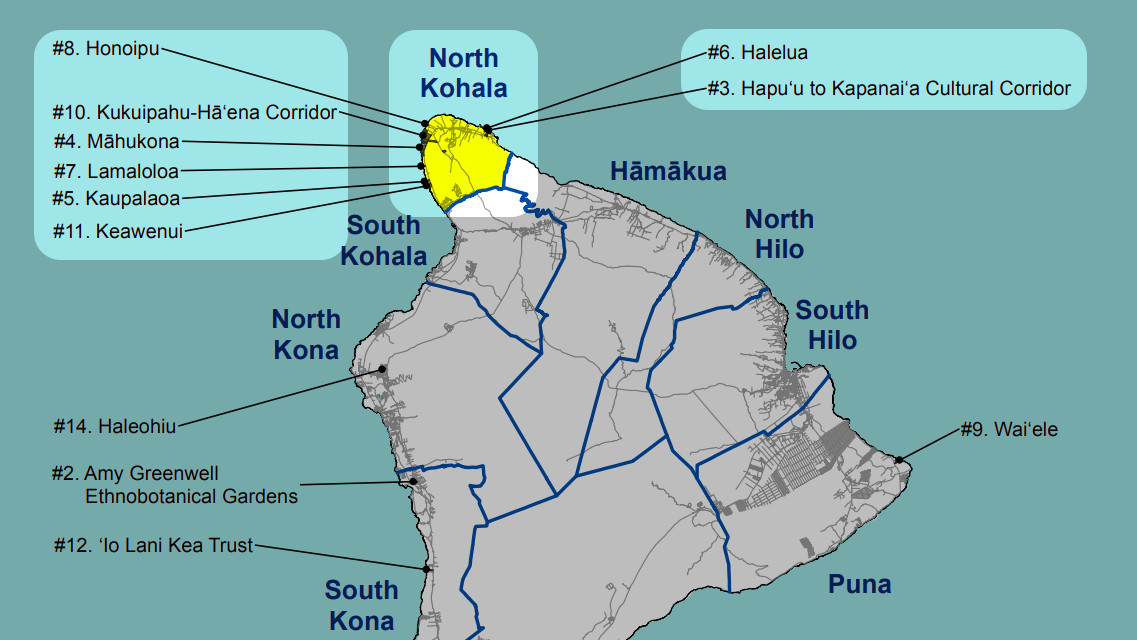 map taken from the 2018 PONC Report to the Mayor

HILO, Hawaiʻi - The Public Access, Open Space, and Natural Resources Preservation Commission got an update the pursuit of treasured lands in North Kohala.

From the 2018 PONC report, priority number 3 is the Hapuʻu to Kapanaiʻa Cultural Corridor, in the heart of Kamehameha I’s homeland in North Kohala.

(BIVN) – A commission tasked with prioritizing the purchase of privately held Hawaiʻi lands got an update on recent acquisitions, as its new report to the mayor again identifies multiple parcels in North Kohala worthy of preservation.

The Public Access, Open Space, and Natural Resources Preservation Commission (PONC) has been submitted the 2018 Report to the Mayor. The document is also available to the public for viewing. Of the 13 locations listed as top priorities for preservation, 8 are in the North Kohala district.

Listing a property in the annual report is the first step. Next, the Hawaiʻi County Council must approve a resolution allowing the Hawaiʻi County  Finance Department to negotiate for the purchase of the land using money from the 2% Land Fund, so named because the fund derives from 2% of real property tax collections.

Ventura said the County made a presentation to the state Legacy Land Conservation Commission for Kapanaiʻa Bay, and was ranked second “when it was all said and done.”

“We anticipate in the near future,” Ventura continued, “to looking to aquire an additional 83-acres out in Kohala to help join the Corridor in conjunction with Hale o Kaʻili, Kapanaiʻa Bay as the other portion.”

“We put in an application for just under $1.5 million dollars in matching funds and we’re pretty confident that based on our presentation and the feedback from the Commission that we’re going to be able to move forward with this purchase,” Ventura said.

Hale o Kaʻili was purchased last year, Ventura said. Kapanaiʻa is on the other side, “where Kapalama Heiau is. There are two privately owned portions left in between and we’re hoping that through fundraising and maybe the Kohala community can get together and and help to acquire some of those portions. And if not, then we’re gonna look at trying to try to fund that gap as well, if possible.”

“It’s hard to explain to the Commission, when they’re looking at at pictures, what an incredible view you have of the ocean and the landscape,” Ventura added. “Yet, if you turn around… and you look mauka, there’s a two-story dwelling that’s just been erected in the last year. So, I think they understood the point that they’re under the threat of development and that’s what helped bring the application process.”