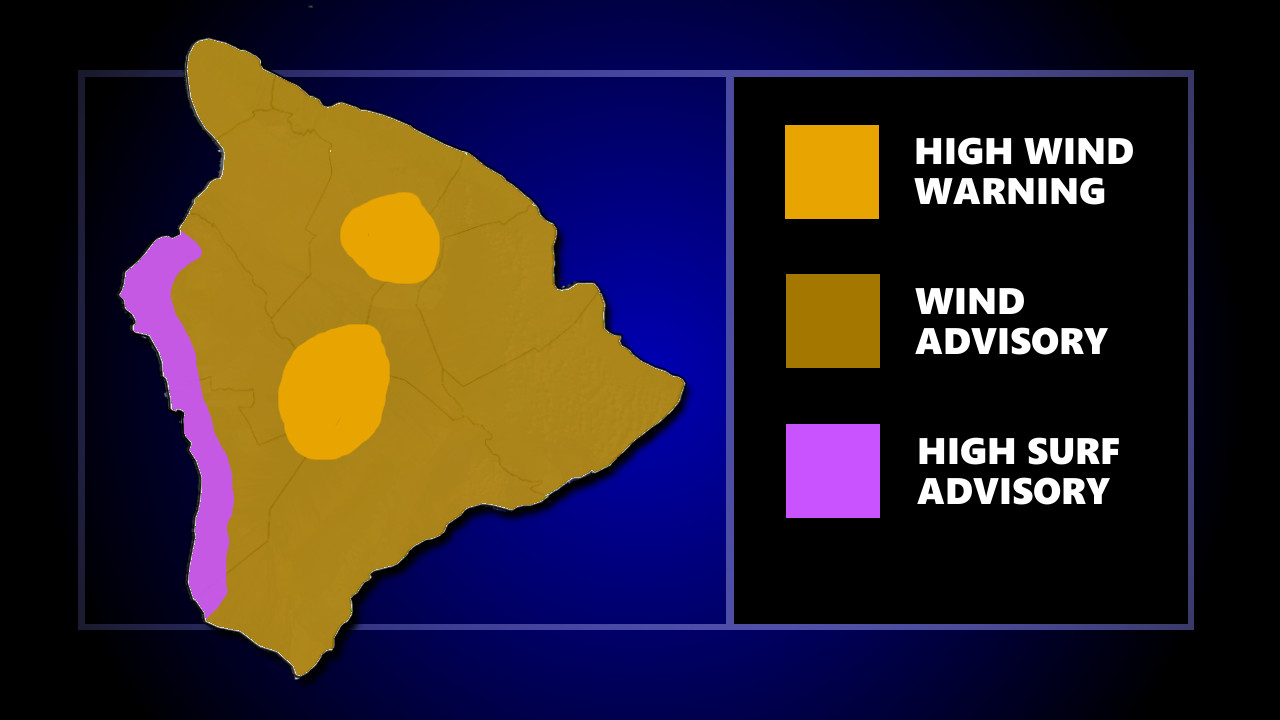 HAWAI'I ISLAND - Large, destructive surf and locally damaging winds will be possible around parts of the state this weekend.

(BIVN) – A powerful area of low pressure developing to the north will move towards the Hawaiian islands this weekend, sending large, destructive surf, and locally damaging winds to parts of the state this weekend, forecasters say.

The National Weather Service in Honolulu has already issued a number of weather advisories and warnings ahead of the storm.

A Wind Advisory is in effect for the rest of the Big Island. Northwest winds will be increasing to 20 to 35 mph in some areas, with localized gusts over 50 mph developing late tonight and Saturday.

“The storm will send a powerful swell toward the islands that will impact exposed north and west facing shores with very high surf,” the National Weather Service stated. “Additionally, the combination of strong onshore winds and high surf will increase the potential for significant coastal flooding that could lead to property damage, road closures and beach erosion.”

A High Surf Advisory is in effect for Kona shores. Surf is expected to build up to 5 to 8 feet tonight and 6 to 10 feet Saturday.

“This event may bring unprecedented coastal flooding to north and west facing shores late Saturday through Sunday,” the National Weather Service said. “so anyone with vulnerable ocean front property needs to complete their preparations for this event as soon as possible. Extreme harbor surges are also expected in north and west facing harbors this weekend.”

Hawaiʻi County Civil Defense reports there are no closures at this time.

The Hawaiʻi Department of Land and Natural Resources issued this media release this afternoon:

(Honolulu) – Numerous divisions of the Dept. of Land and Natural Resources are encouraging everyone to stay very aware of a major storm headed toward Hawai‘i that could bring destructive coastal flooding and erosion and high winds.

The Division of Boating and Ocean Recreation is advising all boaters with craft in state small boat harbors or using off-shore moorings to secure their vessels well in advance of the storm.

The Division of State Parks is advising campers and others using facilities along the coastline to move out of harm’s way if necessary.

The Office of Conservation and Coastal Lands is working closely with the National Weather Service and the City and County of Honolulu to monitor coastal erosion and wave inundation.

And the Division of Conservation and Resources Enforcement is on stand-by to assist in any emergency response.

DLNR Chair Suzanne Case said, “This could be a powerful storm, and along with all of our federal, state and county partners, we can’t stress strongly enough, that anyone living or playing along coastlines should pay attention to the latest weather advisories and warnings to be sure they stay safe.”