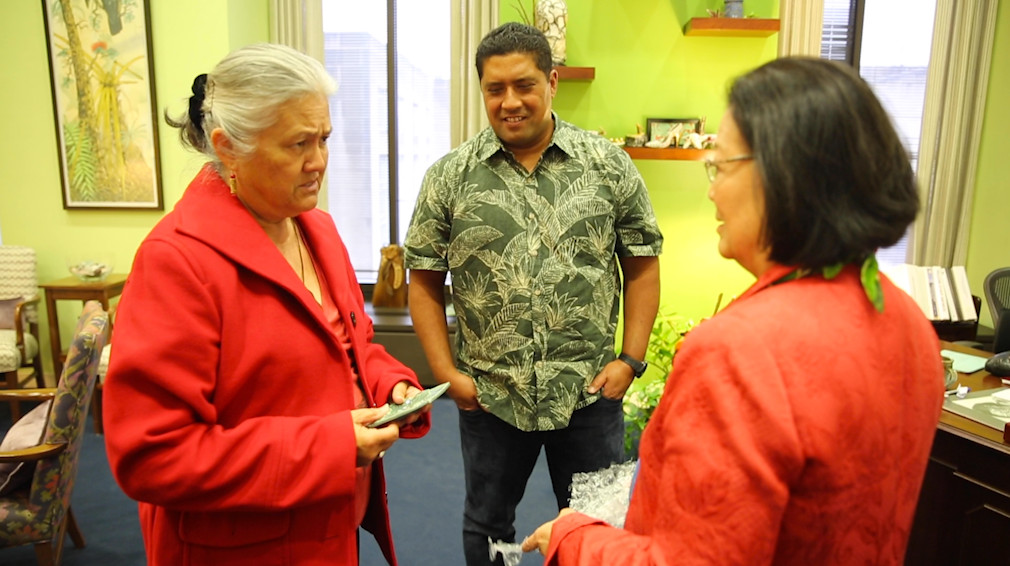 Senator Hirono Meets with Representatives from the Ala Kahakai Trail Association in Her Office in Washington, D.C.

(BIVN) – The Natural Resources Management Act that passed the Senate today on a 92-8 vote, and the two Democrats from Hawaiʻi issued statements praising the bi-partisan effort.

“Passing the Natural Resources Management Act is a great example of what the Senate can accomplish when we come together on a bipartisan basis to get things done,” Senator Hirono said. “As a member of the Senate Energy and Natural Resources Committee, I worked to see that this comprehensive legislation includes many priorities for Hawaii – from protecting our state’s watersheds and endangered species, to enhancing our ability to protect communities from volcanic eruptions, and honoring those who served and sacrificed during World War II.”

Sen. Hirono supported the bill during a recent speech delivered on the Senate floor.

“Our bill provides Hawai‘i funding opportunities for land and water conservation, including some grants that we’ve never been able to access before,” said Senator Schatz. “And it helps preserve our state’s history by allowing Pearl Harbor and Honouliuli to share resources.”

The bill, which now goes to the House of Representatives for consideration, reauthorizes the Land and Water Conservation Fund, secure resources for volcano warning and monitoring, supports the 21st Century Conservation Service Corps, and renames World War II sites in the Pacific.

Hawai‘i is not currently eligible for WaterSMART grants. According to Sen. Hirono:

… up until now has only been available to states under the Bureau’s jurisdiction. This program allows the Bureau to work directly with states, tribes, and local organizations as they plan to address water supply issues through conservation and reuse. The WaterSMART Program includes funding for grants and projects that address water and energy efficiency as well as water reuse and recycling. Expanding eligibility for the WaterSMART program was a recommendation for how the Federal government could better help improve water security in Hawaii made by local stakeholders that participated a field hearing that Senator Hirono, then Ranking Member of the Senate Energy and Natural Resources’ Water and Power Subcommittee, conducted on Oahu in October 2016.