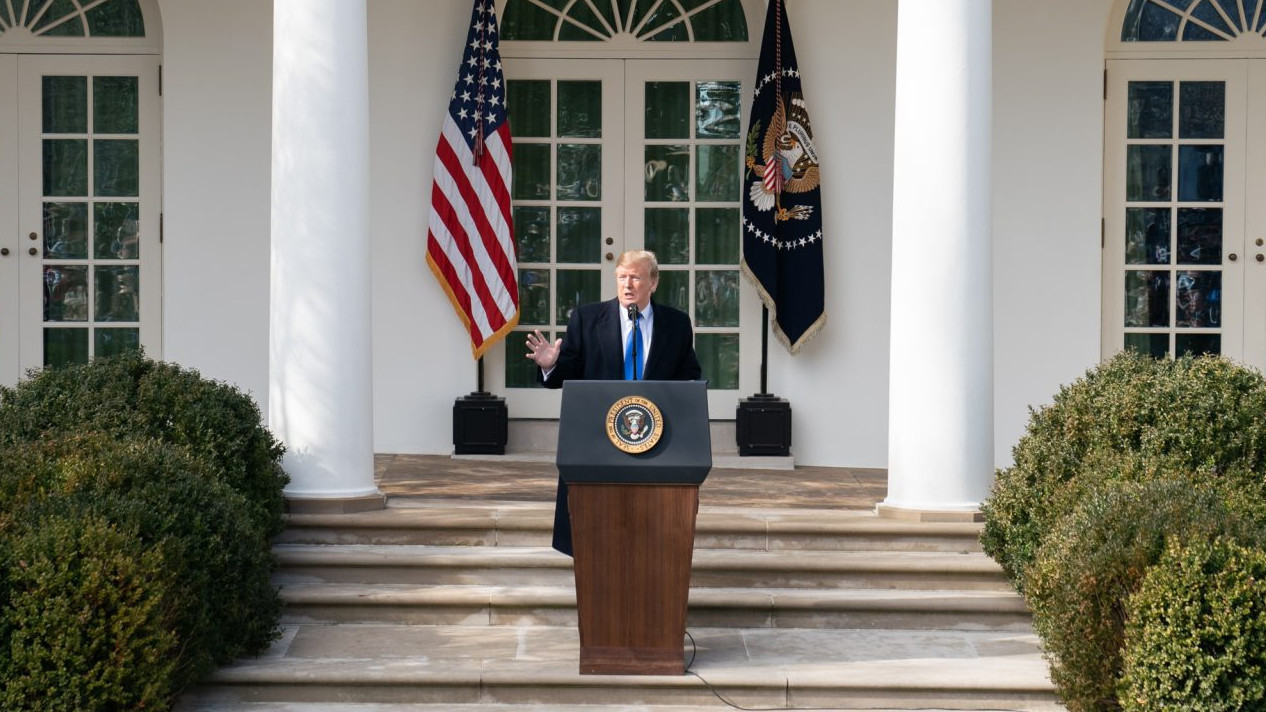 WASHINTON D.C. - Senate Democrats Brian Schatz and Mazie Hirono are calling President Trump's declaration a "fake emergency" and are calling it an attack on the U.S. Constitution.

(BIVN) – With another federal shutdown averted by a deal to fund the government, President Donald Trump is now “using his clear authority to declare a national emergency” as allowed under the National Emergencies Act, the White House says, in order to declare that a national emergency exists at the southern border of the United States and to build a wall.

“We fight wars that are 6,000 miles away; wars that we should have never been in, in many cases. But we don’t control our own border,” President Trump said today during a Rose Garden news conference. “They say walls don’t work. Walls work 100 percent,” he added.

Even before the national emergency was declared, Senate Democrat from Hawaiʻi Brian Schatz was gearing up for a fight. “Yanking money from the Military Construction budget is a violation of the law and the constitution, and an abdication of our obligation to responsibly fund the military. As Ranking Member of the MilCon VA Subcommittee, I will fight this in every way that I can,” Sen. Schatz tweeted. “If they really try to raid Military Construction money there will be a historic floor fight in the United States Senate.”

Sen. Schatz, the lead Democrat on the Senate Military Construction and Veterans Affairs Appropriations Subcommittee, issued another statement this morning.

“To subvert Congress’s constitutional appropriations authority by invoking an emergency is an unlawful abuse of power. As an independent co-equal branch of government, we cannot allow this president to violate the separation of powers.

“We certainly cannot allow him to rob our military of $3.5 billion for critical construction projects that serve our troops, support our allies, and deter our adversaries—all to build a wall that will do nothing to protect America.”

Including funding in Homeland Security appropriations, the White House says the Trump Administration has so far identified up to $8.1 billion that will be available to build the border wall once a national emergency is declared and additional funds have been reprogrammed.

The Department of Defense issued this statement following the declaration:

10 U.S.C., Section 284(b)(7) (Counterdrug Support) authorizes DOD to support the counterdrug activities of other federal agencies, including DHS, with the construction of roads, fences, and lighting to block drug smuggling corridors across international boundaries. DOD will review and respond appropriately to any request for assistance received from DHS.

Per 10 U.S.C., Section 2808 (Military Construction (MILCON)), this declaration of a national emergency at the southern border requiring the use of the armed forces authorizes the secretary of defense to determine whether border barriers are necessary to support the use of the armed forces and to re-direct unobligated DOD MILCON funding to construct border barriers if required.

U.S. Senator from Hawaiʻi, Mazie Hirono, the Ranking Member of the Senate Judiciary Subcommittee on the Constitution, issued this statement, in which she referred to Trump’s declaration as a “fake emergency”, already a trending hashtag on social media:

“At today’s announcement, Donald Trump lied about walls, borders, crime, and legal immigration to justify his declaration of a fake emergency at our southern border. With this desperate action, Donald Trump is putting his vanity wall above the Constitution and the American people. As usual, his announcement was long on lies and short on justification.

“Let’s call today’s action what it is: a blatant, illegal power grab that steals money from our military to advance Donald Trump’s personal agenda. Diverting billions of dollars from planned investments in critical military projects across the world doesn’t make us safer. The President has demonstrated time and again that he doesn’t care that the chaos he creates results in wasted time and resources being expended to clean up his mess – including those spent on court challenges.

“Republicans need to say enough is enough and join us in acting like a separate branch of government by terminating this so-called emergency declaration as soon as possible, and focusing instead on the real needs of all Americans.”

Sen. Schatz had a snarkier statement to share today on social media.

“Anyone else out there playing emergency golf this weekend?” Sen. Schatz tweeted. “I think I may go emergency surfing this weekend depending on the wind.”