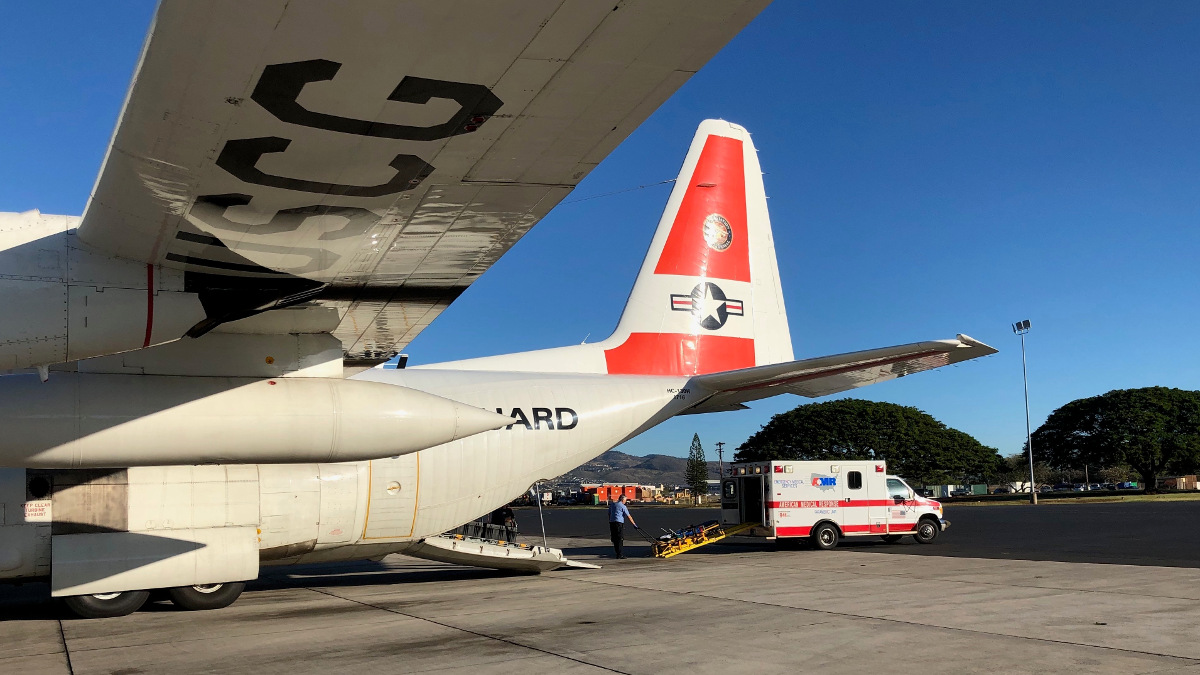 HILO, Hawaiʻi - On Wednesday, the U.S. Coast Guard and a Hawaii Disaster Medical Assistance Team conducted a medical transport of a 35-year-old man from Hilo.

(BIVN) – The United States Coast Guard participated in a joint medical evacuation in Hilo on Wednesday.

Sepsis, according to the Hawaʻi Department of Health, is a “systemic inflammatory response to a severe infection that can quickly progress to multisystem organ failure and death.” Sepsis can have numerous causes.

“We have a great team and work well with DMAT to serve the people of Hawaii,” said Lt. Eric Ferree, Hercules pilot. “The crew did a great job turning the aircraft around quickly; it went smoothly especially in the dark at 5 a.m.”

At 12:24 a.m., Wednesday, Joint Rescue Coordination Center Honolulu (JRCC) watchstanders received a request for assistance from the Hawaii Department of Health in transporting the man suffering from symptoms of sepsis to Oahu for medical treatment. JRCC conferred with the duty flight surgeon who recommended transport of the man as soon as possible.

According to Ferree, the search and rescue alarm went off at 3:45 a.m., the CG 1706 (Hercules) was configured and ready 30 minutes later. The DMAT team arrived on time at 4:30 a.m. As the crew was conducting engine runs before departing an issue with the #3 engine required a shift to the CG 1716. The team rapidly moved the medical pallet to the new plane, it was pre-flighted, and they were “off the deck at 6 a.m. on the dot”.

Upon landing in Hilo, the ambulance was waiting, and the patient boarded smoothly. DMAT personnel provided in-air medical care. Once the Hercules arrived at Oahu, the response teams transferred the patient to awaiting emergency services who then brought him to Straub Medical Center.

According to the Coast Guard, “the Hawaii Healthcare Emergency Management’s Disaster Medical Team is a deployable, all-hazards disaster medical response and recovery team which is part of the medical surge capability within the HPP or Hospital Preparedness Program. All team members are volunteer professionals.”

The Coast Guard says it “consistently works with emergency medical professionals throughout the islands to ensure access to an appropriate level of care as quickly as possible.”