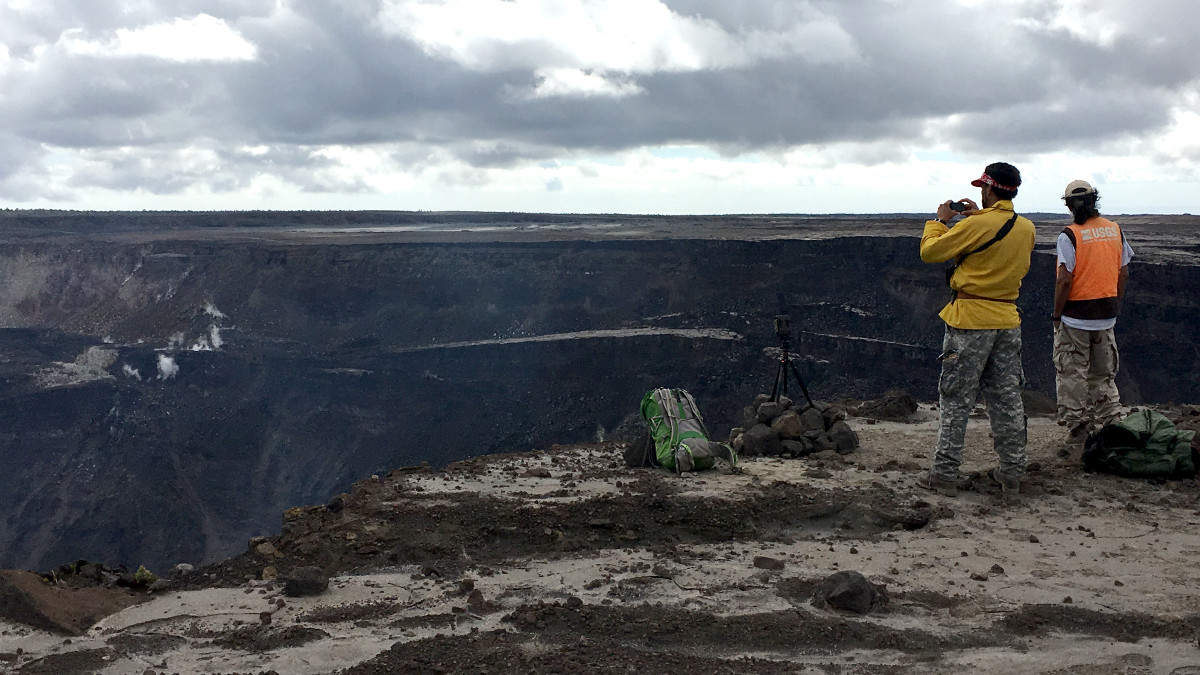 HAWAIʻI ISLAND - This week, the USGS Hawaiian Volcano Observatory turns its attention towards carbon dioxide emissions from the volcano. 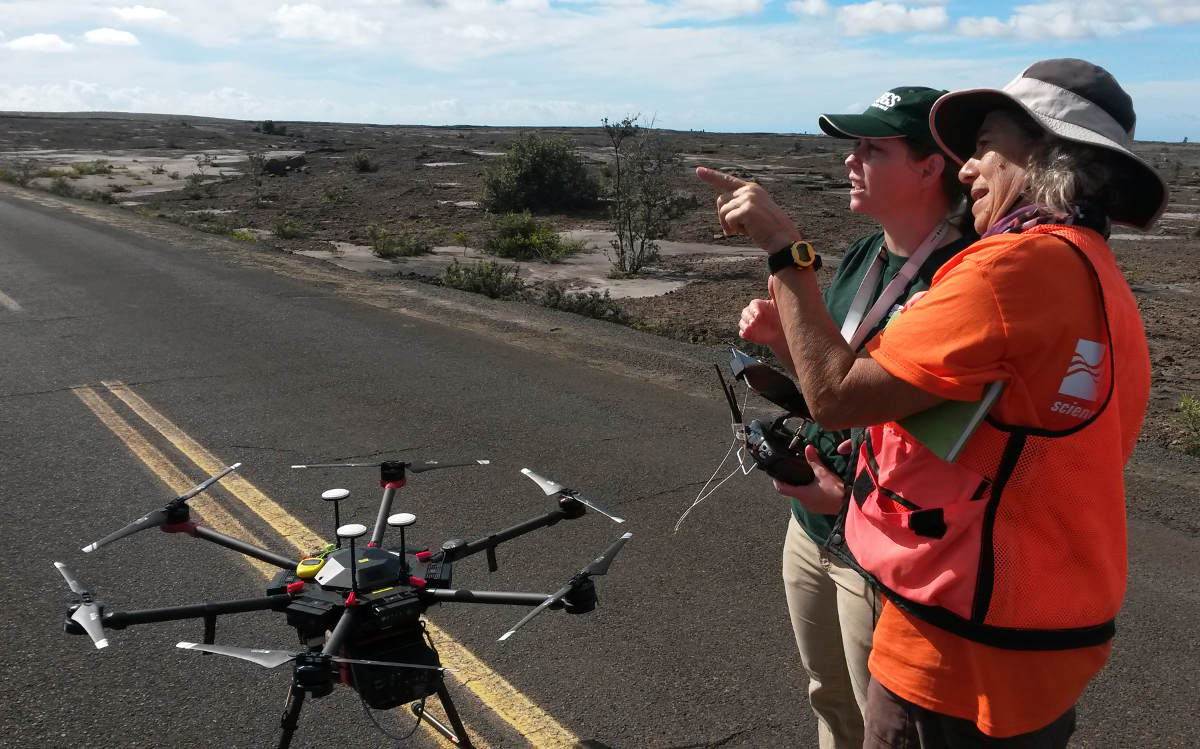 A USGS pilot and Hawaiian Volcano Observatory gas geochemist prepare to conduct a test flight of an unmanned aerial system (UAS) on Kīlauea Volcano in November 2018. This UAS was outfitted with a prototype miniaturized multi-gas sensor for the detection of volcanic gases emitted by Kīlauea, including sulfur dioxide and carbon dioxide. (USGS photo by Patricia Nadeau.)

(BIVN) – Things are relatively quiet at Kīlauea. The volcano is not erupting, and sulfur dioxide, or SO2, emission rates from the summit and from Puʻu ʻŌʻō remain low. These rates have been steady over the past several weeks, scientists say.

In this week’s Volcano Watch article written by U.S. Geological Survey Hawaiian Volcano Observatory scientists and affiliates, the observers say the low SO2 emissions mean a new focus on a different volcanic gas.

From the USGS Volcano Watch:

With the end of Kīlauea Volcano’s 2018 lower East Rift Zone eruption, the Island of Hawaiʻi was able, at long last, to say goodbye to strong vog—volcanic smog produced by voluminous sulfur dioxide (SO2) emissions.

Currently, SO2 emissions on Kīlauea are drastically lower than they have been for decades. However, as mentioned in our November 21, 2018, Volcano Watch article, some SO2 is still present, in addition to rotten egg-scented hydrogen sulfide (H2S).

So, sulfur smells are still sometimes detected around the island, but it’s another gas emitted by Kīlauea that has become more important lately—carbon dioxide (CO2).

CO2 is a significant volcanic emission, along with the familiar sulfur gases, water vapor, and trace amounts of other gases, such as hydrogen chloride, hydrogen fluoride, and helium. What’s important about CO2 specifically is that it can give clues about the depth of magma.

To explain, we’ll use something familiar to everyone—a bottle of soda, which has only one gas (CO2) dissolved in it. This CO2 stays dissolved as long as the bottle is sealed, because the bottle creates enough pressure to keep the CO2 in the liquid. As soon as the bottle is opened, pressure on the liquid decreases and the CO2 creates bubbles that escape to the atmosphere.

Since pressure on magma is created by the weight of the earth above it, the deeper magma is, the higher the pressure it feels. As magma rises to shallower depths, it feels lesser amounts of pressure and different gases are able to escape along the way.

When magma is shallow or actually reaches the surface, the pressure on it is quite low, so SO2 can easily escape, leading to the vog that impacted island residents for so long. But when magma is deeper, as is the case now, there is enough pressure to keep the SO2 dissolved.

However, CO2 is less soluble than SO2 in magma and can escape even when magma is deep and the pressure is high. This is why, even with no lava erupting at the surface, Kīlauea is currently producing significant amounts of CO2. (It’s important to note that these amounts are very small compared to anthropogenic, or human-caused, CO2 emissions.) It’s this CO2, in conjunction with the small amounts of sulfur gases still being emitted, that can provide clues to how deep Kīlauea’s magma is.

Because CO2 can escape even when magma is deep but SO2 mostly stays dissolved until the magma is shallow, deeper magma produces a high ratio of CO2 to SO2. Geochemists typically use this CO2/SO2 ratio as an indication of magma depth.

Deep magma may begin with a high CO2/SO2 ratio, but that ratio will drop as magma moves to shallower depths and more SO2 begins to escape. Therefore, if we can measure Kīlauea’s CO2/SO2 ratio over time, any changes in it could tell us whether magma is once again rising through the system.

The catch is that we must be able to measure the CO2/SO2 ratio. However, accurately measuring the CO2/SO2 ratio in volcanic gas is tricky because of the large and variable amount of CO2 that already exists in the atmosphere. At Kīlauea, the situation is further complicated by collapse events that rearranged the summit caldera and damaged roads and other means of access to degassing areas.

As this new phase of inactivity at Kīlauea continues, gas geochemistry scientists at the USGS Hawaiian Volcano Observatory will explore new avenues for measuring the helpful CO2/SO2 ratio, including the installation of multi-gas sensors at Kīlauea’s summit and the use of gas sensors mounted on unmanned aerial systems (UAS). Our goal in collecting such gas data is to document changes that could eventually indicate an increased likelihood of renewed activity at Kīlauea.