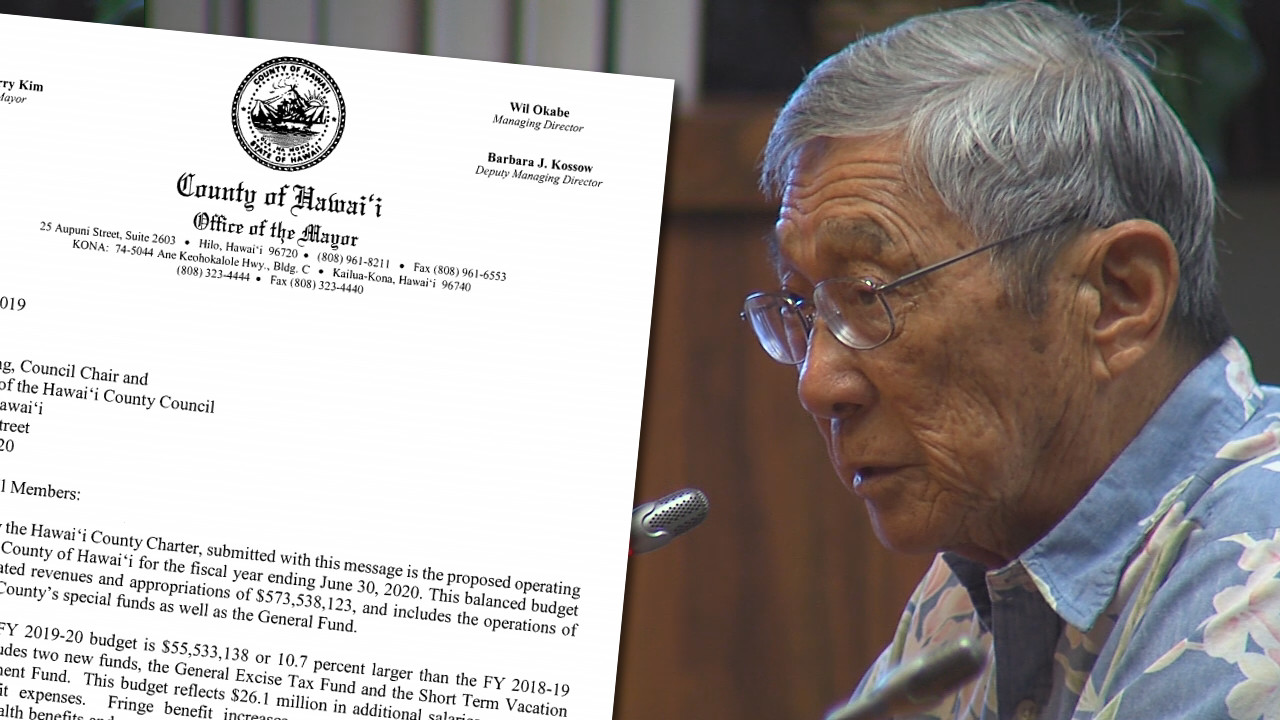 Of note is the creation of two new funds: the General Excise Tax Fund and the Short Term Vacation Rental Enforcement Fund, which together will generate close to $26 million for the County.

Police will also get a boost in the proposed budget. Several positions are being added for Puna and Kaʻū, and for the first time, police body-worn cameras are included in the budget.

The mayor’s budget message to the Hawaiʻi County Council is as follows:

As required by the Hawai‘i County Charter, submitted with this message is the proposed operating budget for the County of Hawai‘i for the fiscal year ending June 30, 2020. This balanced budget includes estimated revenues and appropriations of $573,538,123, and includes the operations of thirteen of the County’s special funds as well as the General Fund.

This proposed FY 2019-20 budget is $55,533,138 or 10.7 percent larger than the FY 2018-19 budget and includes two new funds, the General Excise Tax Fund and the Short Term Vacation Rental Enforcement Fund. This budget reflects $26.1 million in additional salaries, wages and employee benefit expenses. Fringe benefit increases were a result of higher retirement contributions, health benefits and post-employment benefits, for both our current employees and our retirees. Increased salaries and wages are primarily a result of collective bargaining, but also include the addition of several necessary positions. The most significant increase in positions is for the Police department. Several positions were added for the Puna and Kau districts to help improve safety for our community and our officers.

Real property tax revenue is expected to increase by $15.7 million or 5.0 percent. Fuel tax is increasing in the coming year by $6.1 million as the last rate increase goes into effect. The general excise tax surcharge is expected to generate $25 million. The new short term vacation rental registration fees and fines are expected to be about $846,000 for the coming fiscal year. The increases in sewer fees and tipping fees will generate an additional $2.8 million. Intergovernmental revenue will increase by $3.1 million. All of these increases are essential to
providing services to our community.

The largest expenditure increases were related to salaries and wages and fringe benefits. Our contribution to the Employees’ Retirement System is expected to increase by $12.3 million due to the increase in rates passed by the Legislature in 2017 and the increase in salaries and wages. This is the third of four scheduled employer retirement contribution increases through fiscal year 2021. The ERS rates were increased by 16% this year for all categories of employees. By 2021, the retirement contribution rates will have increased 64% for police and fire employees and by 41% for our general employees over the four year period. Fringe benefits also increased due to the $5 million increase in health insurance premiums.

This year, our highest priority is to adequately staff our Police Department. Funding was added for ten additional police officers in Puna and ten additional police officers in Kau. In addition, several supervisory positions were added so that a supervisor will be available in each district on every watch. Body worn cameras are also included in the budget. We believe that all of these additions are vital to improving the safety of our community and our officers.

Our transit system continues to be a priority as we implement the Mass Transit master plan. Significant funding was provided to replace our aging fleet of buses and to provide matching funds for our anticipated federal grants. New positions were also added to help improve our transit service. Additional funding for our roads will help us to achieve our goal to repave each mile of road once every 30 years. Eleven miles of roads have been paved in the first half of this fiscal year, and have greatly improved the commute for many of our residents.

Wastewater has many projects that will be coming online in the near future. Their operations are growing to be better able to track the necessary repairs and maintenance of our current facilities and prepare for the expansion of their operations as new projects come on line.

After years of budget cuts, the revenue increases discussed above have generated funding to be able to provide critical services to our community. In addition to the items listed above, two additional plan examiners were added to relieve the backlog in building permits. Funding for Parks and Recreation included critical new positions and related equipment to help better maintain the parks in our communities.
We have not included additional funding to address the homeless problem on our island. However, funding has been received from the Governor’s office to create an additional shelter to service this portion of our population.

All of these critical additions will allow us to better service our community. The budget should contain what is needed to help the people of our County and provide necessary services. The budget should be based on our objectives to provide quality service to the public, while maintaining prudent and conservative spending. This budget still does not include everything needed, but it does go a long way towards improving the services required by our community.

The following table describes the budgeted expenditures for FY 2018-19 and the proposed budget for FY 2019-20 for each fund: 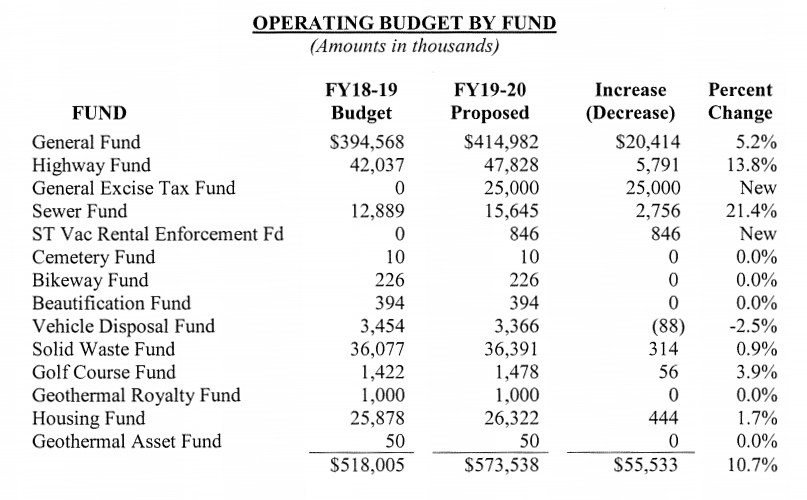 The following table presents a summary of projected FY 2019-20 revenues from various sources and the changes from the current budget: 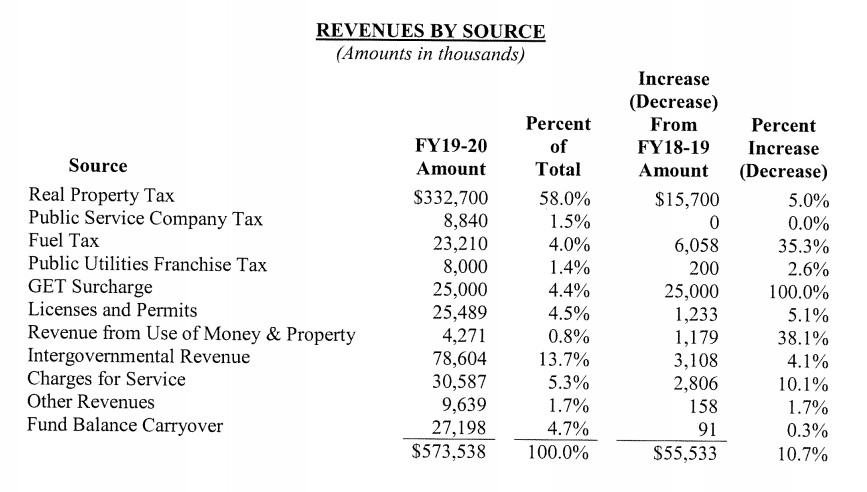 Real Property Tax. Real property tax revenues are expected to increase by 5.0%, or $15.7 million, primarily due to new construction and an increase in taxable values.

Fuel Tax. Fuel tax is expected to increase by $6.1 million, an increase of 35.3% due to an increase in fuel tax rates.

General Excise Tax Surcharge. General excise tax surcharge is expected to be approximately $25 million in the coming year. This is the first full year of revenues from the 1/4% surcharge.

Revenue from the Use of Money and Property. Interest earned is expected to increase by $1.0 million due to the increase in interest and investment earnings.

Intergovernmental Revenue. Increases in grant revenues of about $3.1 million reflect those grants we are aware of at this time.

The following table presents a summary of projected FY 2019-20 expenditures from various sources and the changes from the current budget. 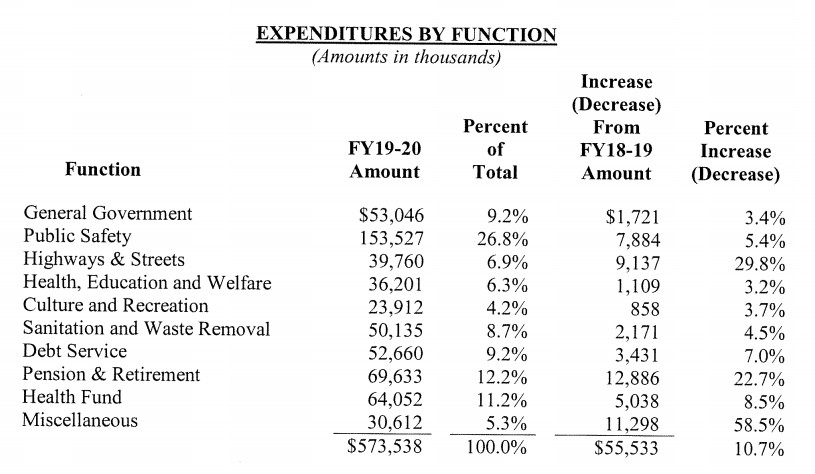 Information Technology. Increases of approximately $500,000 were included for network improvements and new servers.

Police. The Police department has an increase of approximately $5.8 million, due primarily to increases in personnel and funding for body worn cameras. In addition to the normal collective bargaining increases, the budget includes 10 additional Police Officer II positions for the Puna district and for the Kau district. The budget also includes nine new sergeant positions for the various districts so that each district will have supervisors on each watch. Also included are body worn cameras and improvements to the Police computer network. Six additional dispacth positions were also included.

Highway Maintenance. Additional funding of about $2.7 million is appropriated for additional road maintenance and related equipment.

Mass Transit. New grants of $1.4 million for transit are included in the budget. In addition, funding for mass transit was increased by about $5.0 million primarily for the purchase of new buses, additional staffing, and the federal grant match in accordance with the transit master plan.

Coordinated Services. Additional grant funding of about $750,000 is expected and appropriated for various programs.

Sewer. Funding for sewer was increased by about $2.4 million or 22.04% due to the increase in personnel for the new asset management system being developed by the EPA and for the operation of the new R-I facility coming online. In addition, engineering positions and funding were added to help catch up on repairs and maintenance at current facilities.

Transfer to Debt Service. Debt service increased $3.4 million or 7% due to the increase in State Revolving Fund loans for upcoming sewer and solid waste projects, as well as, the increase for new bonds to be issued for projects already in progress.

Retirement Benefits. Contributions to the employee retirement system will increase by approximately $12.3 million, or 25.8%, as the result of rate increases established by the State Legislature and the increase in salaries and wages.

Health Benefits. Contributions to the Employer Union Trust Fund will increase by $5.0 million, or 8.5%, due primarily to the increase in premiums and the increase in other post-employment benefits required by state law.

Public Safety Disaster and Emergency. The funding for this account was increased by $1.25 million to be prepared for future disasters.

This proposed budget represents our departments” best efforts to meet the needs of our residents in a timely and responsible fashion, while striving to maintain the level of services our residents deserve. We are committed to continuing our investment in infrastructure, transportation, public safety, and creating safer communities.

These investments are critical to the future of our Hawai‘i Island. We look forward to working closely with the Hawai‘i County Council as we prepare a responsible budget to meet the needs of those that we serve.