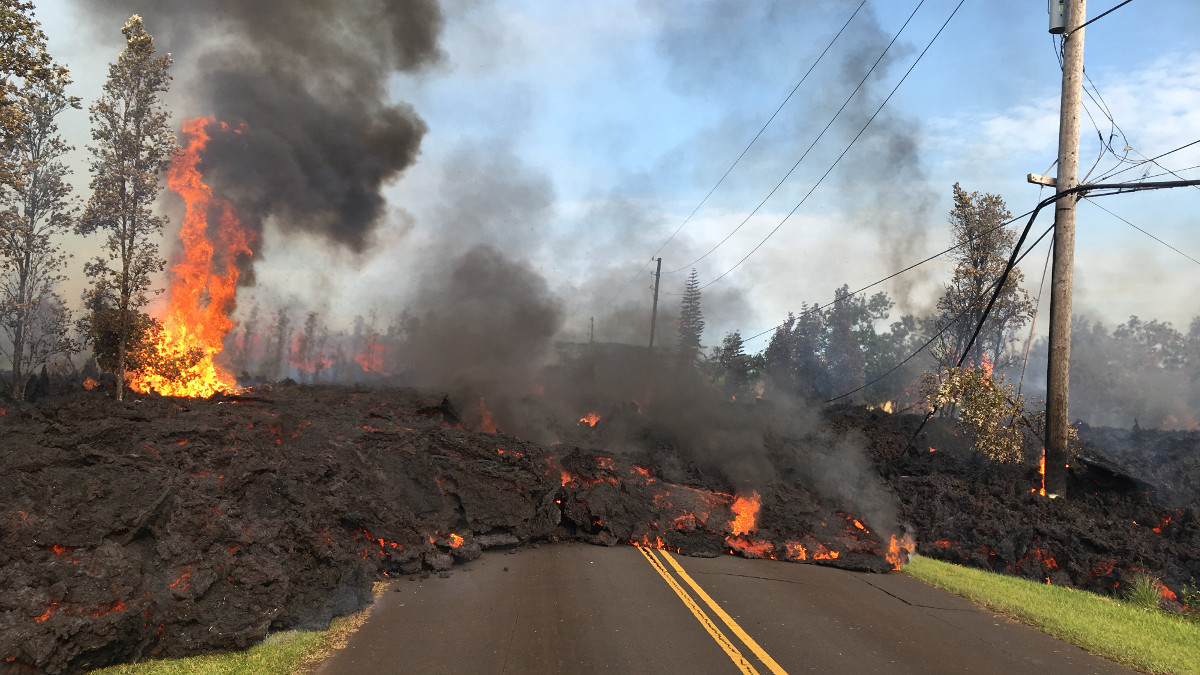 USGS PHOTO taken May 5 shows lava from fissure 7 slowly advanced to the northeast on Hoʻokppu Street in Leilani Estates subdivision.

(BIVN) – The Big Island Press Club has named the Hawaiʻi County Civil Defense as the recipient of this year’s Lava Tube dishonor, while at the same time handing the meritorious Torch of Light Award to County Councilwoman Sue Lee Loy.

As the press club explains, the Torch of Light award is given to an individual or entity who brightens the public’s right to know, while the Lava Tube dishonor is given for a lack of communication and keeping the public in the dark.

The Lava Tube dishonor couldn’t be more aptly named this year. It is awarded to the Hawaii County Civil Defense Agency for its handling of communications with the public and the media during the 2018 volcanic eruption. Information often wasn’t forthcoming; when media releases were issued they sometimes contained errors. In addition, Civil Defense didn’t participate in daily Hawaiian Volcano Observatory telephone media briefings.

Many off-island journalists from around the country and world participated in the telephone briefings, and when they asked questions that would be most appropriately answered by Civil Defense, they went unanswered.

When journalists called Civil Defense for clarification on press releases, they were often told by the media liaison to send an email with a question, which is inefficient when lava may be flowing toward a community. Sometimes those tasked with responding to calls literally knew nothing. One journalist talked to a FEMA “media specialist” who had arrived on the island just the day before, and was told he had no idea how to respond to or get answers to questions.

The only Civil Defense media briefings were in person at the Civil Defense building, outside; they refused to add a phone broadcast or Facebook stream on the grounds it would disadvantage deaf viewers because there was no closed captioning. That completely disadvantaged journalists from anywhere outside of Hilo, and it’s possible that contributed to much of the inaccurate information reported worldwide about the lava flow.

The Press Club also detailed its Torch of Light award:

BIPC has selected Hilo Councilwoman Sue Lee Loy for its Torch of Light award for sponsoring a charter amendment that brings more transparency to the process of awarding raises to Hawaii County government’s top officials.

Lee Loy, who was a freshman council member at the time, successfully got first the County Council, and then the voters, to agree to more transparency for the Salary Commission. Council support was unanimous, and the ballot initiative was approved by 44,631 voters, or more than 80 percent of those casting ballots.

The charter amendment slows down the approval process to provide safeguards for the public by requiring, at least 30 days prior to the approval of any salary adjustment, public notice of the proposals in at least two daily newspapers in the county, a public hearing videoconferenced so both east and west Hawaii residents can participate and a “detailed report” of how the commission reached its recommendations, which would be open for public inspection.

Lee Loy’s work does not keep top government officials from receiving raises. It just gives the public the opportunity to weigh in.

The Big Island Press Club, the state’s oldest press club, founded in 1967, has awarded the Lava Tube and the Torch of Light annually since 1997 on Freedom of Information Day, March 16. This day also marks the birthday of our nation’s fourth president, James Madison. Born in 1751, Madison was the principal architect of the U.S. Constitution, and one of the three authors of the Federalist Papers; he is recognized by historians as one of America’s earliest and foremost advocates for open, accountable governance.

NOTE: I would like to disclose that I, David Corrigan, owner / operator of Big Island Video News, have been a member of the Big Island Press Club for years. I did not participate in the process of awarding this year’s Lava Tube or the Torch of Light.