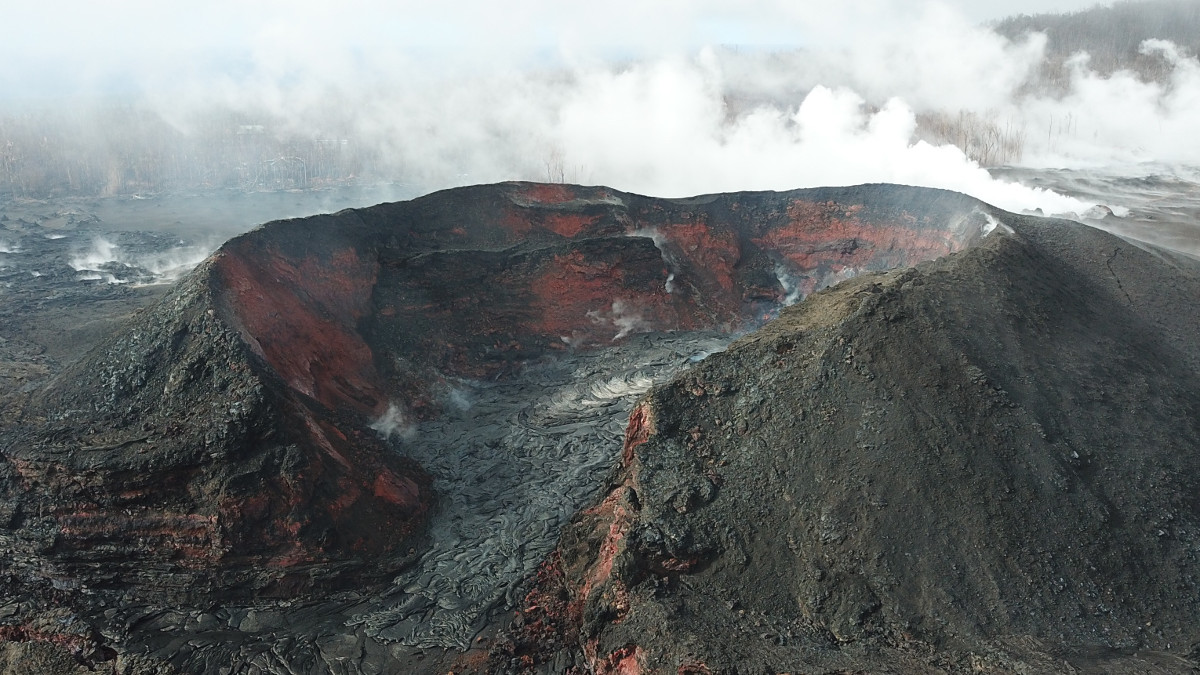 Hawaiian Professor Delves Into Records In Search Of Volcanic Deity

PUNA, Hawaiʻi - The community will have input on whether Fissure 8 is named after ʻAilāʻau, Pele, or something else, as the Hawaiʻi Board of Geographic Names compiles a list of recommendations.

(BIVN) – Will Fissure 8 – the most destructive feature that emerged during the 2018 eruption of Kīlauea on the lower East Rift Zone – be named after the Hawaiian deity of Pele, ʻAilāʻau, or maybe neither?

The Hawaiʻi Board on Geographic Names, which is establishing a Permitted Interaction Group to review name recommendations and report back to the board by the end of the year, met on Oʻahu today. The Board has compiled a log of all the name proposals it has received thus far and posted it online.

In Hawaiian culture, Puna is known as a realm of Pele, the volcanic deity who resides in Halemaʻumaʻu crater on Kīlauea. But legend tells of another deity: ʻAilāʻau, the forest-eater.

Kalani Makekau-Whittaker, Piʻilani Kaʻawaloa, Keone Kalawe, and Lei Kaleimamahu – a respected group of Puna residents – are suggesting the fissure be named Ahuʻailāʻau. In their application, they note that ʻAilāʻau “predates Pelehonuamea and has been relatively absent from the Kanaka consciousness for generations.”

“The collective experience of numerous cultural practitioners in Puna from the beginning of the eruption who have been face-to-face with the lava on multiple occasions has been filled with sightings, visions, and communication with ʻAilāʻau,” the group wrote. “He has appeared in dreams of a number of cultural experts and there was a sighting of him in human form at the Pu‘uhonua o Puna. Because ʻAilāʻau’s presence has been so prevalent throughout this eruption with so many people, it is no surprise that the visions received for the name of the fissure include his name.”

Gary Smith, who recommends the name Puʻuoʻailaʻau, agrees. “It has been relayed to me for some in Puna this extremely violent and unpredictable volcanic activity was historically highly unusual,” Smith wrote. “It was totally different from what kamaʻaina there have ever witnessed. For many who still revere and respect Pele, they believe this is not her doing. It is the work of her nemesis ʻAilāʻau.”

Those familiar with Hawaiʻi Island’s historic lava flows may recognize the name ʻAilāʻau as the namesake of the lava flow that occurred in the 1400’s. The ʻAilāʻau flow lasted six decades and covered much of Kīlauea. But an April 2012 Volcano Watch article written by scientists of the USGS Hawaiian Volcano Observatory seems to attribute that activity to Pele. USGS wrote:

Interpretations of chants suggest that Pele arrived just before the start of the ʻAilaʻau flow, 150–200 years after settlement of the island, and that she used that flow to destroy the Puna forest because Hiʻiaka took so long to return from Kauaʻi with Lohiʻau. When Pele killed Lohiʻau in the tragic end of a love triangle, Hiʻiaka dug the caldera, trying to find Lohiʻau’s body. If these interpretations are correct, then the Holo Mai Pele collection of mele and hula probably developed after 1500.

In a recent submission to the Hawaiʻi Board of Geographic Names, Dr. Larry Kimura – a well known faculty member of Ka Haka ʻUla O Keʻelikōlani College of Hawaiian Language at UH-Hilo – investigated mention of ʻAilaʻau in old Hawaiian language newspapers.

According to Kimura, “the documentation substantiates ʻAilāʻau as a god connected to the volcano before Pele.” Kimura refers to this 1923 article by Z.P.K. Kawaikaumaiikamakaokaopua from Ka Nupepa Kuokoa:

ʻAilāʻau, he/she is the very first keeper of the volcano, and this name ʻAilāʻau belongs to Pele.

Kimura says a S.M. Kamakau article from May 5, 1870, “states that it is by way of ʻAilāʻau that an incarnation of a Pele form is manifested.”

The earliest record the mentions ʻAilāʻau is from a 1837 article recorded by Makaluhe of Pōnahawai in Ke Kumu Hawaii, which Kimura says “pertains to the ills of smoking tobacco”, and in which ʻAilāʻau – along with Pele, Hiʻiaka, and Kamiki – is mentioned as one of the ancient gods worshiped by tobacco smokers.

Kimura, who has been referred to as the “grandfather” of the Hawaiian language revival, has not recommended a name for fissure 8, however he has submitted an application to name the entire volcanic fissure system Papalauahi, a traditional Hawaiian place name.