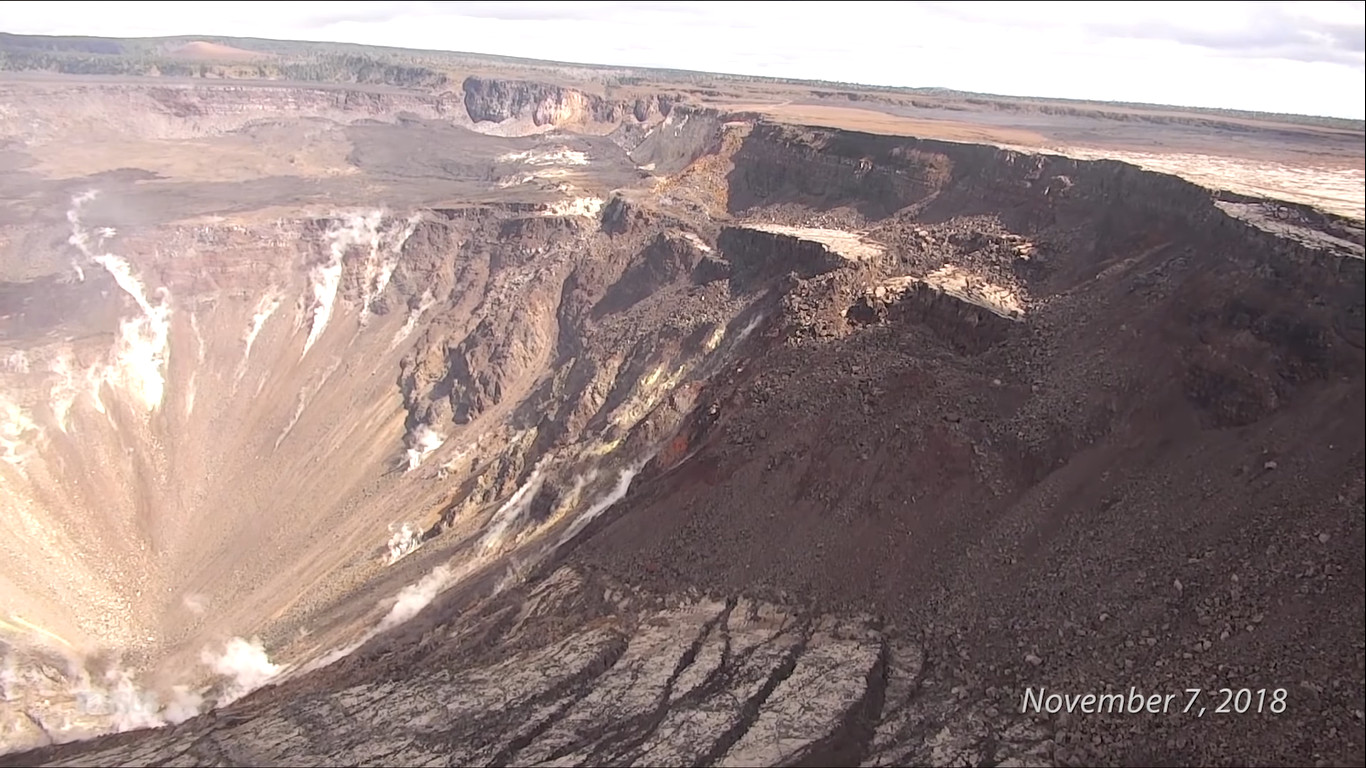 image from USGS video recorded over Halemaʻumaʻu on November 7, 2018

HAWAIʻI VOLCANOES NATIONAL PARK - In this week's article, scientists explain how the recent, dramatic changes at the summit of Kīlauea provide a better understanding of the past. 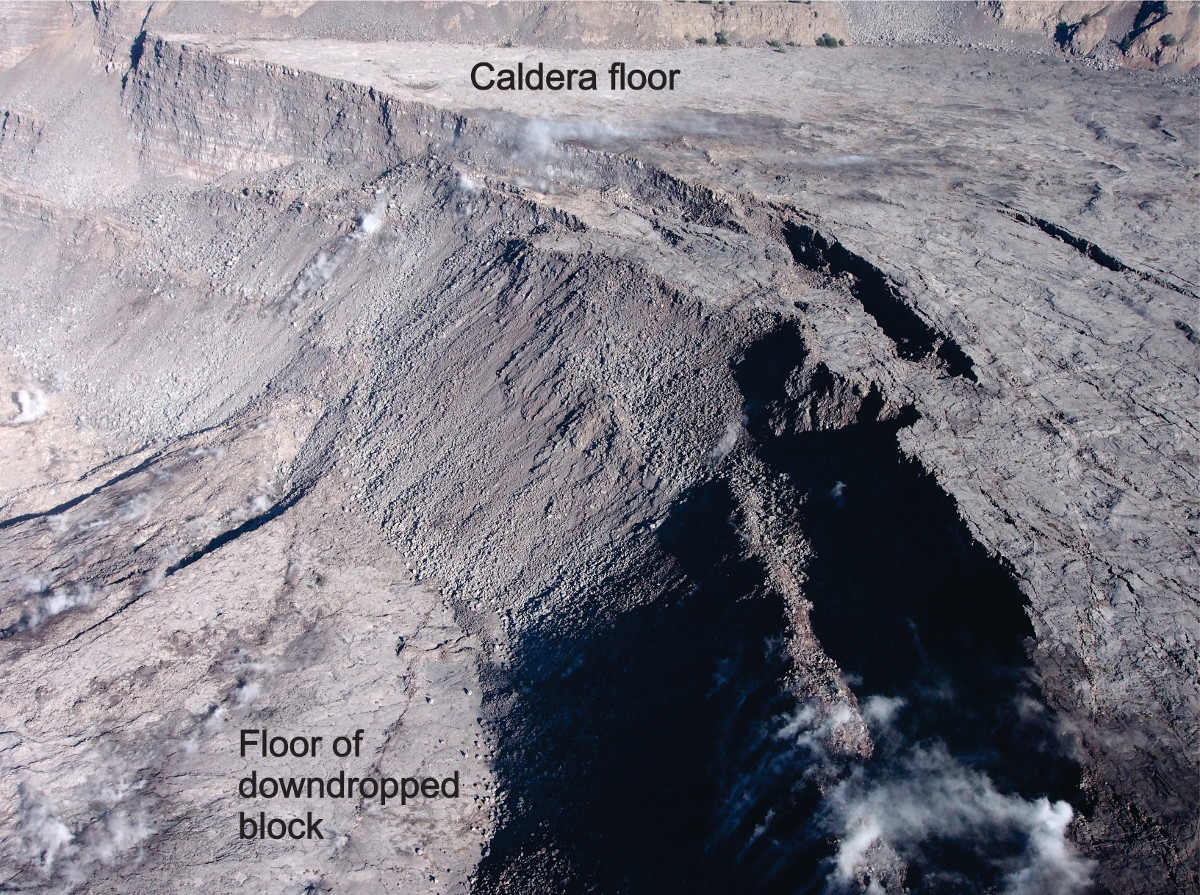 This aerial view of the western part of Kīlauea Volcano’s caldera was taken on August 6, 2018. The down-dropped block is faulted about 120 m (400 feet) below the caldera floor. Many 19th-century lava flows are exposed in the fault scarps. Halema‘uma‘u (not visible) is to the left of this photo. USGS photo by D.Swanson.

(BIVN) – This week, the USGS Hawaiian Volcano Observatory lowered the Volcano Alert Level for Kīlauea to NORMAL and the Aviation Color Code to GREEN. After three and a half decades, the volcano is quiet. But the work of the scientists has not ended.

In this week’s Volcano Watch article, written by USGS HVO scientists and affiliates, we learn of another way in which the 2018 eruption of Kīlauea is providing new opportunities for research.

A good field geologist is an opportunist. Never content with what outcrops are available, she jumps at the chance to see another one, hoping that it will provide a better understanding to some question about what happened in the past. But it isn’t every day that new outcrops are created, and rarer still when they are on the scale of those formed during the faulting of Kīlauea Volcano’s caldera floor in summer 2018.

As Halemaʻumaʻu sank and widened, its crater wall began to expose lava flows that formed during earlier eruptions and were covered by later flows. In particular, the north side of Halemaʻumaʻu bites some 500 m (1640 ft) deeper than before, potentially making accessible lava flows that erupted and gradually filled the caldera early in the 19th century.

In addition, the faults that bound the down-dropped sector of the caldera exhumed the south sulfur bank and expose lava flows not previously observed by scientists.

Why are these new outcrops so important? Aaron Pietruszka, USGS scientist and former University of Hawaiʻi graduate student, and his UH adviser, Mike Garcia, discovered gradual changes in the chemical composition of Kīlauea lava with time, starting before the 19th century and continuing to the present. The number of lava flows that could be sampled from the 19th century itself was, however, very small.

Chemical and isotopic analysis of 19th-century caldera fill exposed in the high wall of Halemaʻumaʻu and adjacent faults will augment and refine their startling finding. It won’t be easy to do the sampling, though, because a lot of rocky rubble mantles much of the wall, possibly obscuring some flows. But it needs to be done before lava returns to Halemaʻumaʻu.

The faults cutting the caldera floor may reveal details about the 19th-century caldera fill that have long eluded geologists. Maps and sketches of the floor made at various times show wide, multiple lava lakes and probably several editions of “black ledges” adjacent to the lakes.

How deep were those lakes? Were they merely shallow ponds and bays no more than a few tens of meters (yards) deep, or were one or more of them so deep that they connected with the magma reservoir perhaps 1 km (0.6 mi) or more deep?

The new exposures provide cross-sections through some of the 19th-century caldera fill. These cross-sections can be examined to look for the margins and floors of ancient lava lakes, spills from those lakes, eruption conduits, and other features leading to a greater understanding of how the caldera was filled.

If the binocular observations are correct, then the explosive deposits must be buried still deeper than the base of the north wall. That would imply that the deposits formed when the caldera was very deep, as geologists have hypothesized but never documented. This interpretation badly needs boots-on-the-ground checking, because the binocular observations alone are inconclusive.

The news isn’t all good. Shaking during the more than 60 large earthquakes last summer caused rockfalls along the west side of the caldera that buried at least one outcrop of explosive deposits more than 1000 years old. Luckily, those deposits had already been sampled.

For a tantalizing time, a much larger outcrop of these old deposits reappeared in the caldera wall as the caldera floor dropped; this outcrop is shown in a photograph taken a few years before the 1919 lava flow covered it. But gradually throughout the summer 2018, this exhumed outcrop became stranded and inaccessible as the caldera floor sunk below it. Perhaps a way will eventually be found to study this superb outcrop.

Summer 2018 gave field-focused geologists lots to do and think about in Kīlauea Volcano’s caldera. With new samples and first-hand observations, their work will build on what is already known or surmised and help us better understand the caldera and how its 19th-century activity differed so much from that of the past 100 years.