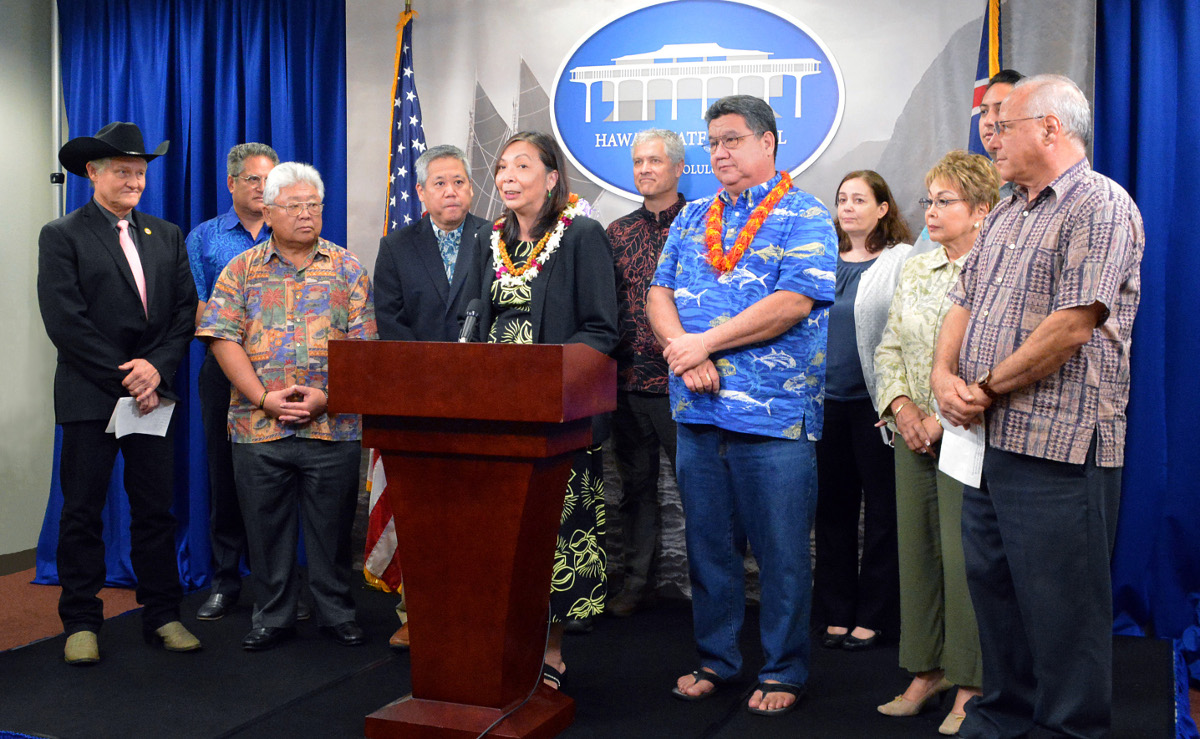 HONOLULU, Hawaiʻi - HB 1180 HD1 has now passed both the State House and State Senate, and goes to the governor for his final approval.

(BIVN) – The bill appropriating funds for disaster relief and recovery for the County of Hawaiʻi following the destructive 2018 eruption of Kīlauea has passed the State Legislature and has been transmitted to Governor David Ige for his signature.

House Bill 1180 HD1 passed the State Senate today on third reading, unamended, after a positive recommendation from the Ways and Means Committee on Thursday.

This news release was issued by state lawmakers after the passage of the bill:

During a press conference today, Big Island lawmakers talked about the road to recovery for Hawaiʻi Island.

“The people of Puna and the Big Island are hurting and need our help,” said Rep. Joy A. San Buenaventura (Puna). “They are struggling just to secure their basic needs such as food, water, and a roof over their heads. We are hoping the county uses these funds wisely and will be able to leverage it with FEMA funds. My community has been hard hit and it is very difficult to rebuild.”

HB 1180 HD1 provides a total of $60 million in relief funding: $20 million in state grants and $40 million in state loans with expected payback from the federal government. The state has already provided $22 million in emergency funds for Big Island disaster relief, bringing the entire package to $82 million.

Hawaiʻi County Council member Herbert M. “Tim” Richards III said he came to the Capitol today to affirm to the Legislature that the County Council is unified and committed to using these funds for rebuilding both the infrastructure and the economy.

“It is not just the physical damage but also the economic damage that we’ve had on the whole Big Island that needs to be repaired,” Richards said. “Estimates are that we suffered a $500 million loss in tourism. We have to rebuild that. We are looking at roads, tourism marketing, and jobs. It will take time, but we are moving forward reasonably quickly.”

The Kilauea eruption covered nearly 14 square miles in Puna; it destroyed 716 homes and made over three thousand parcels inaccessible, and destroyed a school, farms, cultural sites, roadways, water systems, recreational destinations, and a large portion of the electrical grid.

House Speaker Scott K. Saiki said moving this bill through as quickly as possible was a priority for the Legislature.

Senate President Ronald D. Kouchi agreed and said on opening day he promised that “we would not forget the Big Island this session.”

“Mahalo to my Senate and House colleagues who worked so hard on this bill,” Ruderman said. “It is a giant step toward providing much needed financial relief to the County of Hawaiʻi and residents of Puna, who have experienced extreme hardship over the past year in rebuilding their lives.”