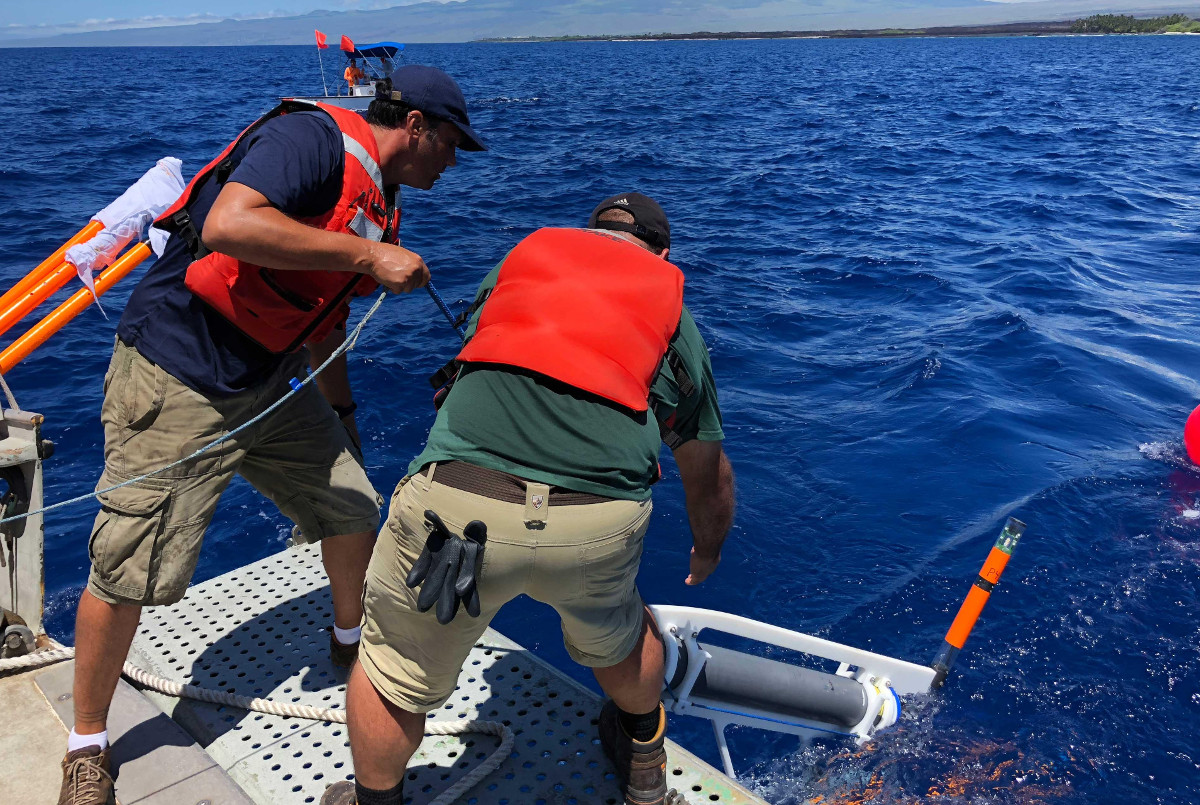 KAILUA-KONA, Hawaiʻi - Researchers with the University of Hawaiʻi - Mānoa are gaining a better understanding of the Hualālai aquifer using marine electric-field receivers.

(BIVN) – A nine-person research team from the University of Hawaʻi is trying to gain a better understanding of how freshwater from Kona’s Hualālai aquifer releases into the ocean, below the seafloor.

According to the Hawaiʻi County Department of Water Supply, the Hualālai Aquifer Sector Area is divided into the Kiholo and Keahou Aquifer System Areas, the latter of which was recently the focus of a National Park Service petition to designate it as a Groundwater Management Area. The petition was denied by the State Commission on Water Resource Management.

The team from UH-Mānoa issued this media release this week, explaining the study:

The nine-person research team conducted an eight-day marine survey and covered approximately 200 kilometers to gain a better understanding of how freshwater releases into the ocean from below the seafloor. Eric Attias, a postdoctoral researcher at the UH Mānoa served as chief scientist.

The backbone of the study uses a surface-towed marine controlled-source electromagnetic (CSEM) system called Porpoise that was recently developed by the Electromagnetic Laboratory at Scripps Institution of Oceanography.

“You have two novelties here, you have a very new system, in terms of worldwide, which is one-of-a-kind, and the second novelty is the capability of this system to detect deep submarine groundwater deposits. Hence, both the technology and its application are new,” said Attias.

Researchers can differentiate between fresh and salt water in submarine groundwater systems through the use of the new technology. CSEM is being used like MRI imaging to map the electrical resistivity of the groundwater structures along the coast up to about 500 meters below the seafloor.

“The work is in progress, but once I have solid results it will highlight a few things. First of all, the interconnectivity [of freshwater] between the land and the offshore environment. Second, it will show us, offshore where we have deposits of groundwater located. Which means we get their location, their lateral and vertical distribution, and how deep they can extend,” said Attias.