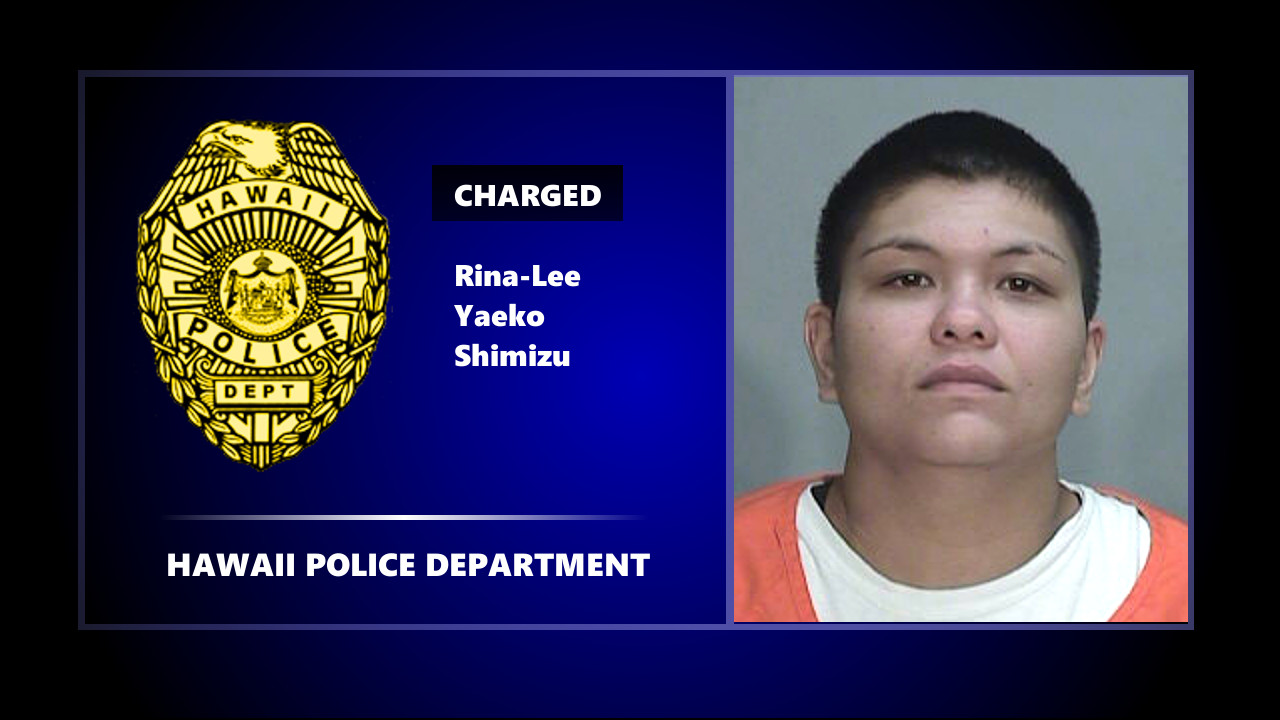 Woman Charged After Police Say She Rammed Vehicle In Kalapana

PUNA, Hawaiʻi - A 38-year-old resident of Hawaiian Beaches was arrested and charged after she allegedly rammed a police vehicle with her sedan during a traffic stop on Highway 130.

(BIVN) – Police say an officer’s vehicle was rammed multiple times by a sedan Wednesday night in Kalapana, allegedly driven by a 38-year-old Puna woman who was later arrested and charged in connection with the incident.

Police say Rina-Lee Yaeko Shimizu of a Hawaiian Beaches address fled the scene of the incident and was subsequently arrested closer to her subdivision near the bottom of Kahakai Boulevard.

A media release issued by police on Monday detailed the altercation:

The incident began on Wednesday evening (April 17) at approximately 9:00 pm when Puna patrol officers conducted a traffic stop on a dark Acura four-door-sedan on Highway 130 near the 17-mile marker for an inoperable headlight. As one officer pulled in behind the Acura, the suspect quickly initiated a U-turn and collided head-on with another officer’s occupied vehicle that had stopped on the roadway providing backup on the traffic stop. After the collision which deployed airbags on the Acura, it rolled onto the shoulder and into an embankment and came to a stop. As officers approached on foot yelling commands to the suspect, she then reversed rapidly ramming the same officer’s vehicle twice more before fleeing the scene heading towards Pāhoa town. Officers pursued and eventually stopped the Acura after the vehicle experienced mechanical difficulties near the bottom of Kahakai Boulevard in Hawaiian Beaches. Shimizu was arrested for several traffic offenses and an outstanding warrant for revocation of parole; Detectives continued the investigation and later served a search warrant on the vehicle recovering drugs and a loaded pistol.

Following the incident, a 32-year-old Puna Patrol officer was transported to the Hilo Medical Center and treated for injuries sustained in the collision, police say. He was subsequently released in good condition.

On Friday evening (April 19) at 8:00 pm after conferring with prosecutors, Shimizu was charged with one count of first-degree criminal property damage, one count of first-degree assault on a law enforcement officer, one count of second-degree assault, three counts of third-degree promotion of a dangerous drug, place to keep a firearm, place to keep ammunition, firearm on a highway, ownership/possession of firearm prohibited, operating a vehicle under the influence of an intoxicant, and 5 additional traffic offenses. She is being held in lieu of $263,000.00 bail pending a court appearance today, (April 22) and remains at the Hawaii Community Correctional Center on a revocation of parole.