HAWAIʻI ISLAND - The chemical composition of lava eruptions, the magmatic nature of the explosions at Halemaʻumaʻu, and the connection between summit collapse events and surges along the lower East Rift Zone are examined. 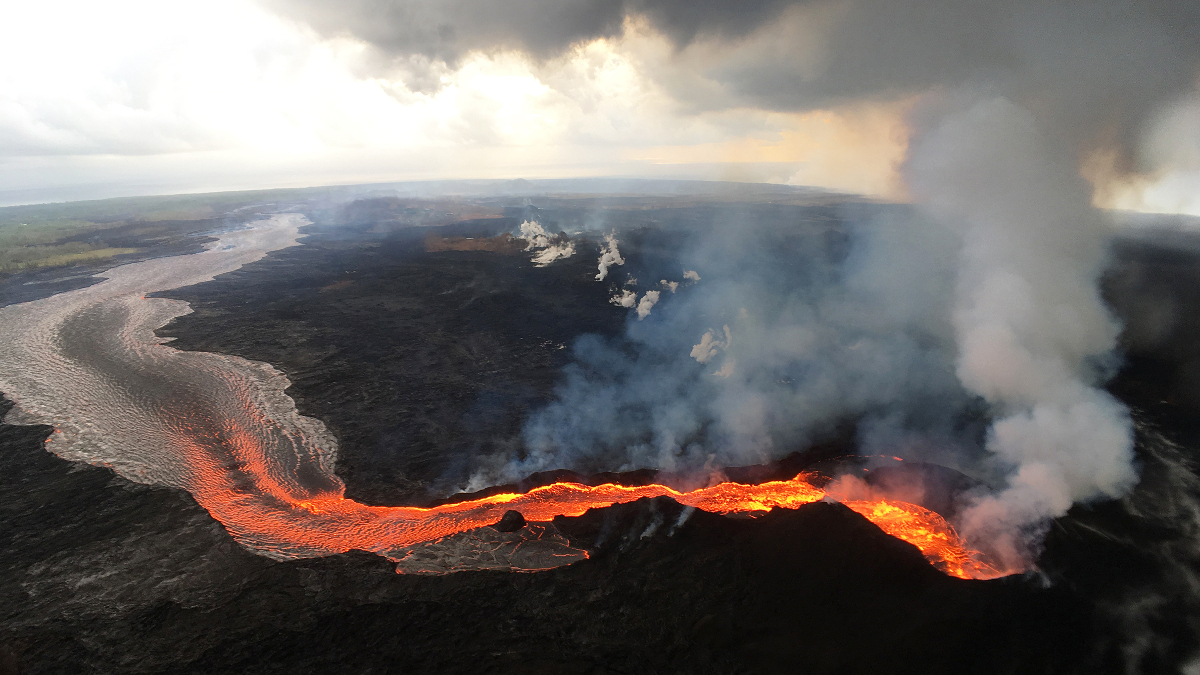 (BIVN) – In this week’s Volcano Watch article written by the U.S. Geological Survey Hawaiian Volcano Observatory and its affiliates – as well on as a recent Island Issues broadcast with Sherry Bracken – scientists discuss “what we’ve learned from Kīlauea’s 2018 lower East Rift Zone eruption”.

May 3, 2019, marks the one-year anniversary of the start of Kīlauea Volcano’s 2018 lower East Rift Zone eruption. Over the past year, USGS Hawaiian Volcano Observatory (HVO) geologists and collaborators have been closely studying the vast amount of data collected during the summer eruption. Now is a good time to explore what’s been learned, and what’s still unfolding.

First, ongoing work is telling us how the changing chemical composition of the magma erupted in 2018 controlled the lava-flow hazard. The first two weeks of the eruption (May 3-18) produced low eruption rates and relatively small flows. Chemical analyses indicated that the lava originated from pockets of older magma stored underground in the lower East Rift Zone. This cooler and less fluid magma was probably residue from earlier eruptions.

This stored magma was presumably forced out by the intruding dike of magma that originated from Puʻu ʻŌʻō. University of Hawaiʻi at Hilo researcher Cheryl Gansecki says that chemical analyses indicate that the dike may have intersected two, or even three, separate stored magma bodies.

Around May 18-19, the eruption vigor changed as hotter and more fluid magma was erupted. This magma was presumably draining from the summit magma reservoir. The eruption rate increased roughly 10-20 times, and the flows became larger, faster-moving, and much more hazardous.

A similar—although less dramatic—chemical change occurred during the 1955 lower East Rift Zone eruption, but it was not recognized until long after that eruption ended. Daily tracking of lava composition during the 2018 eruption was important because it allowed us to identify the chemical change in early May, and to correctly anticipate that hotter, more fluid magma—and more hazardous lava flows—might be around the corner.

Magma composition also helped explain another hazard of the 2018 eruption. In mid-May, brief explosions occurred frequently from fissure 17, throwing lava bombs several hundred meters (a few hundred yards). An initial explanation was that they were driven by groundwater seeping into the fissures, causing steam blasts.

However, chemical analyses revealed that fissure 17 erupted lava with an unusual composition. Nearly all lava erupted on Kīlauea is basalt, but fissure 17 erupted Kīlauea’s first documented andesite. Andesite is higher in silica than basalt, and is, therefore, less fluid. The more viscous consistency of andesitic lava makes it easier for large gas bubbles to coalesce and burst with high pressure, which provides a likely explanation for the explosive activity at fissure 17.

The eruption also highlighted the close connection between Kīlauea’s East Rift Zone and the volcano’s summit magma reservoir. In June and July 2018, there were near-daily summit collapse events, each with the equivalent of a magnitude-5.3 earthquake.

Time-lapse cameras monitoring the fissure 8 lava channel observed that the eruption rate began to increase within minutes after a summit collapse, eventually peaking 2‒4 hours later. At least once, the increased eruption rates produced overflows from the lava channel that could have threatened adjacent residential areas.

The short delay before lower East Rift Zone eruption rates increased indicates that the “surge” in eruption vigor was driven by a pressure pulse originating from the summit collapse and transmitted down the 40-km- (25-mi-) long magma conduit to the lower East Rift Zone—akin to a hydraulic press. The 2‒4-hour delay in peak eruption rates allowed HVO and emergency managers, in at least one instance, to anticipate and prepare for the overflow hazard.

These are just a few of the new insights gained from Kīlauea’s 2018 lower East Rift Zone eruption. They show how unraveling each volcanic process helps us better understand the hazard, and, in turn, to forecast and prepare for hazards in future eruptions.