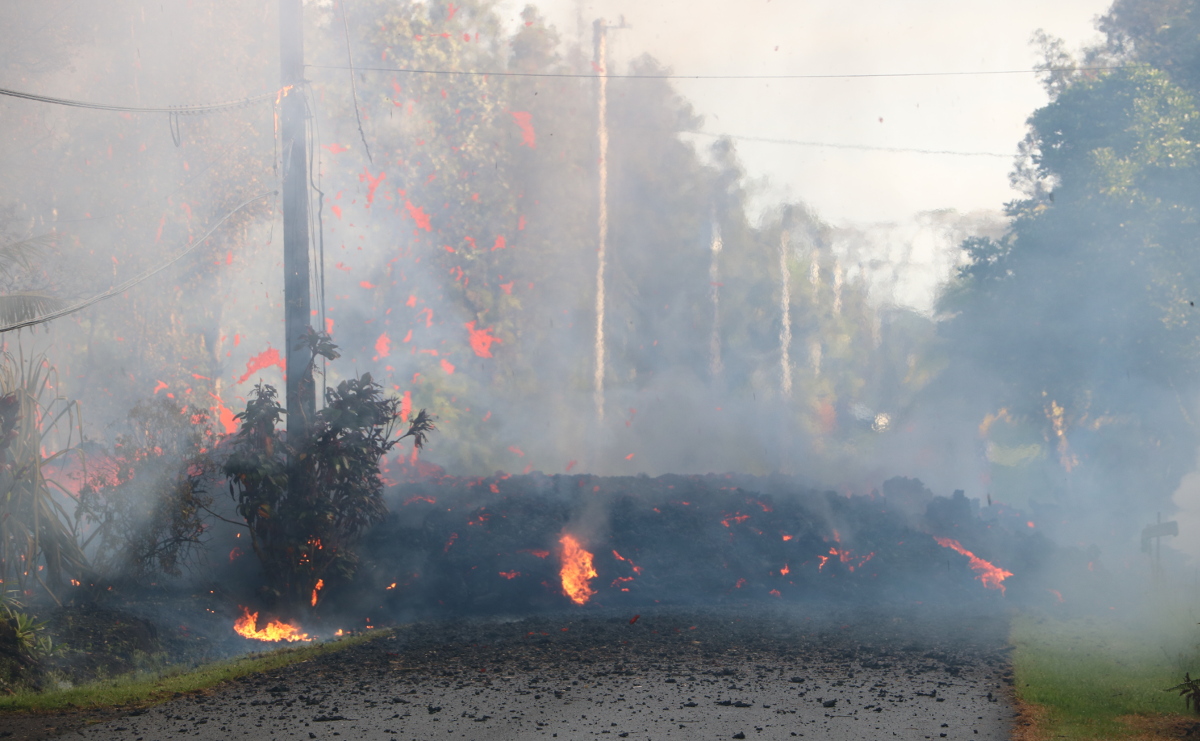 The start of fissure 3 during Kīlauea’s lower East Rift Zone eruption. Lava erupting to the surface cut across Kaupili Street around 7:00 a.m. on May 4, 2018. USGS photo by M. Patrick. 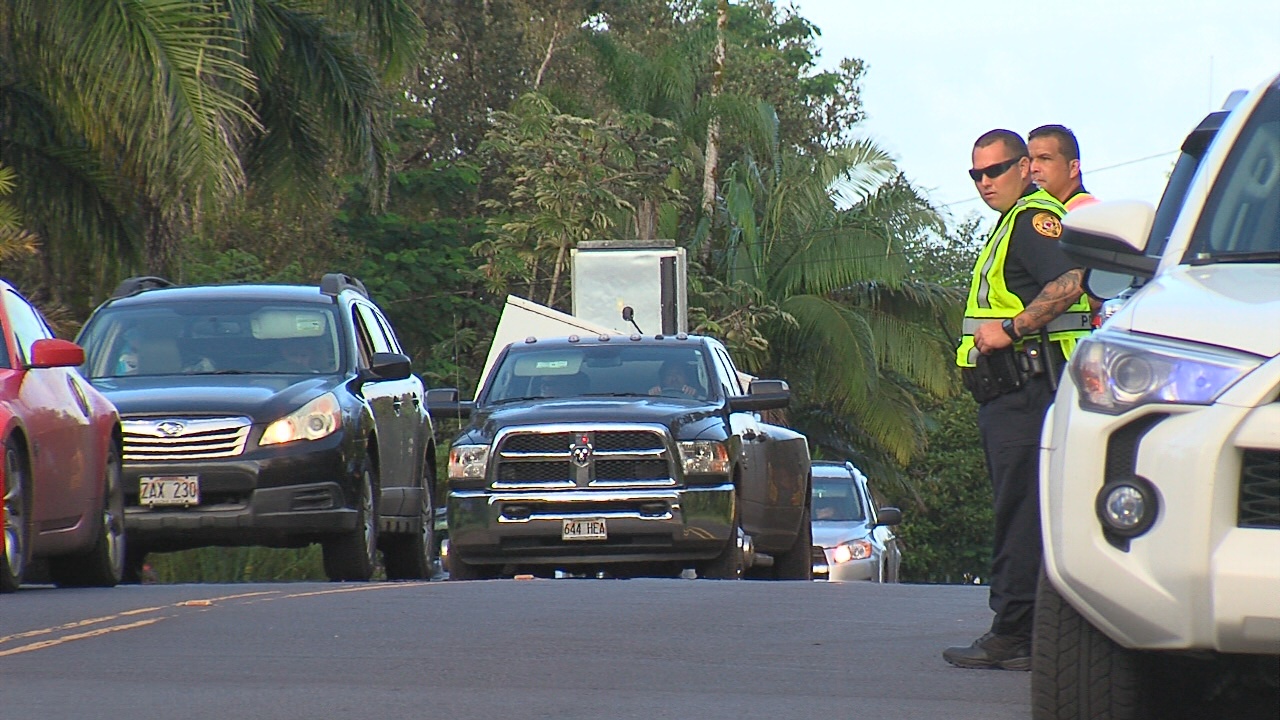 (BIVN) – On May 3, island residents will be thinking about the day – exactly one year ago – when everything changed.

On May 3, 2018, Kīlauea Volcano began a new, destructive eruption on the lower East Rift Zone, beginning in the Leilani Estates subdivision.

In this week’s Volcano Watch article written by U.S. Geological Survey Hawaiian Volcano Observatory scientists and affiliates, the unique perspective of the team of geologists – tasked with tracking the volcanic activity and forecasting the hazards – is shared:

With the one-year anniversary of the onset of Kīlauea Volcano’s 2018 lower East Rift Zone eruption upon us, USGS Hawaiian Volcano Observatory (HVO) staff, like many Hawaiʻi residents, are reflecting on this historic event.

On May 3, 2018—two days after HVO issued a notice that an eruption on Kīlauea was possible—we (HVO geologists) began our day with an 8:00 a.m. overflight of the volcano’s East Rift Zone.

The crater in Puʻu ʻŌʻō had drained three days earlier, leaving a large empty pit and questions as to where magma might head next. Earthquakes indicated that magma was migrating into the lower East Rift Zone, so our overflight included photographic and thermal surveys all the way to the eastern tip of the Island of Hawaiʻi. We saw nothing unusual.

Returning to HVO in the afternoon, we settled in to write our reports. As we did, HVO technicians working on field instruments near Leilani Estates periodically informed us of their status via radio. Around 4:30 p.m., they reported steam within the subdivision, and moments later, confirmed that they had seen lava.

The HVO geology team immediately gathered our gear for a helicopter overflight. Knowing that we could be in the field all night, we packed extra water, batteries and other equipment. About 20 minutes later, we were in the air, flying down the East Rift Zone towards Leilani Estates. 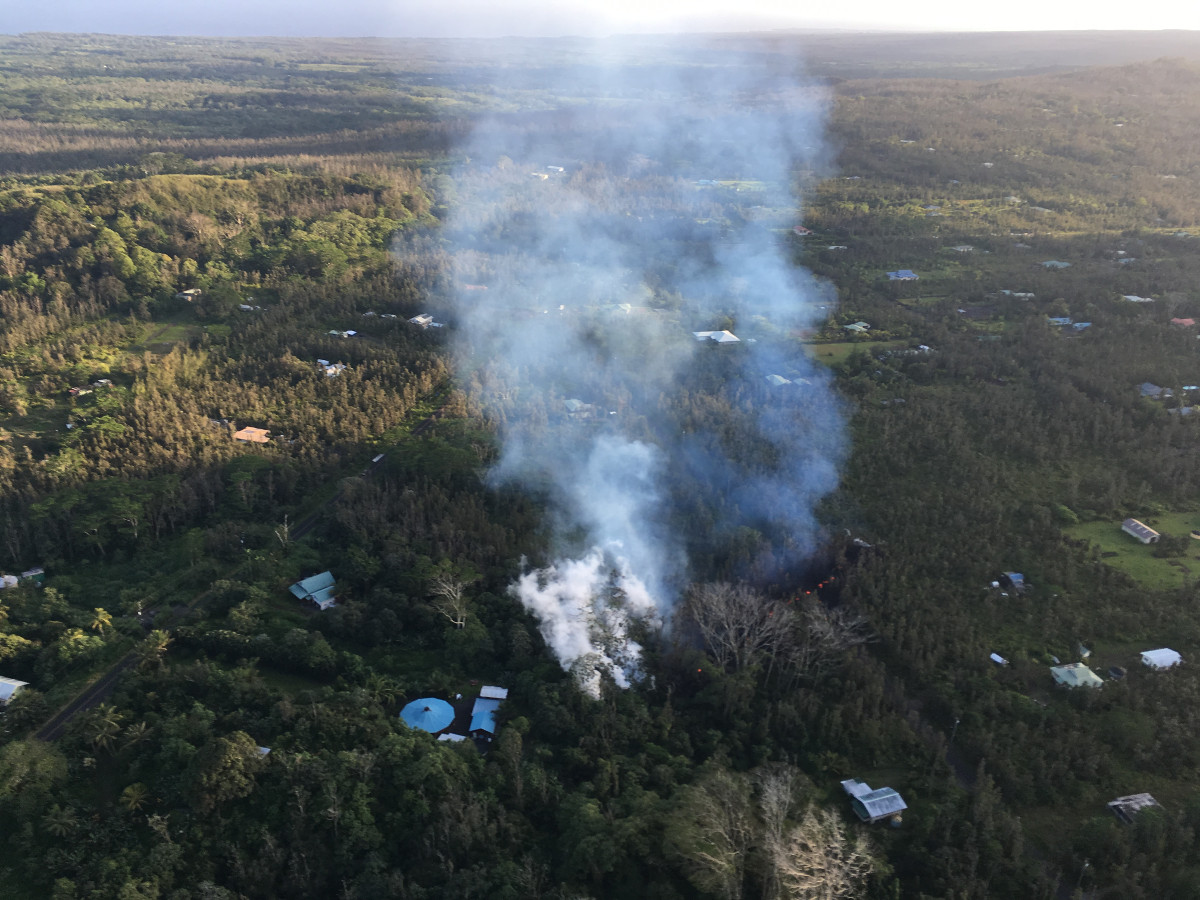 As the helicopter approached the lower East Rift Zone, we could see gas and smoke rising from the forest. Reaching Leilani Estates, we circled the source of the plume and got a clear view of lava erupting onto the surface. Large gas bubbles were bursting through viscous orange lava oozing from a fissure that had severed Mohala Street.

With an erupting vent in a residential neighborhood, we needed to get accurate information to emergency managers right away. Circling the fissure, we transmitted GPS coordinates, along with photos and video, back to HVO staff who were communicating with Hawaiʻi County Civil Defense from the observatory. 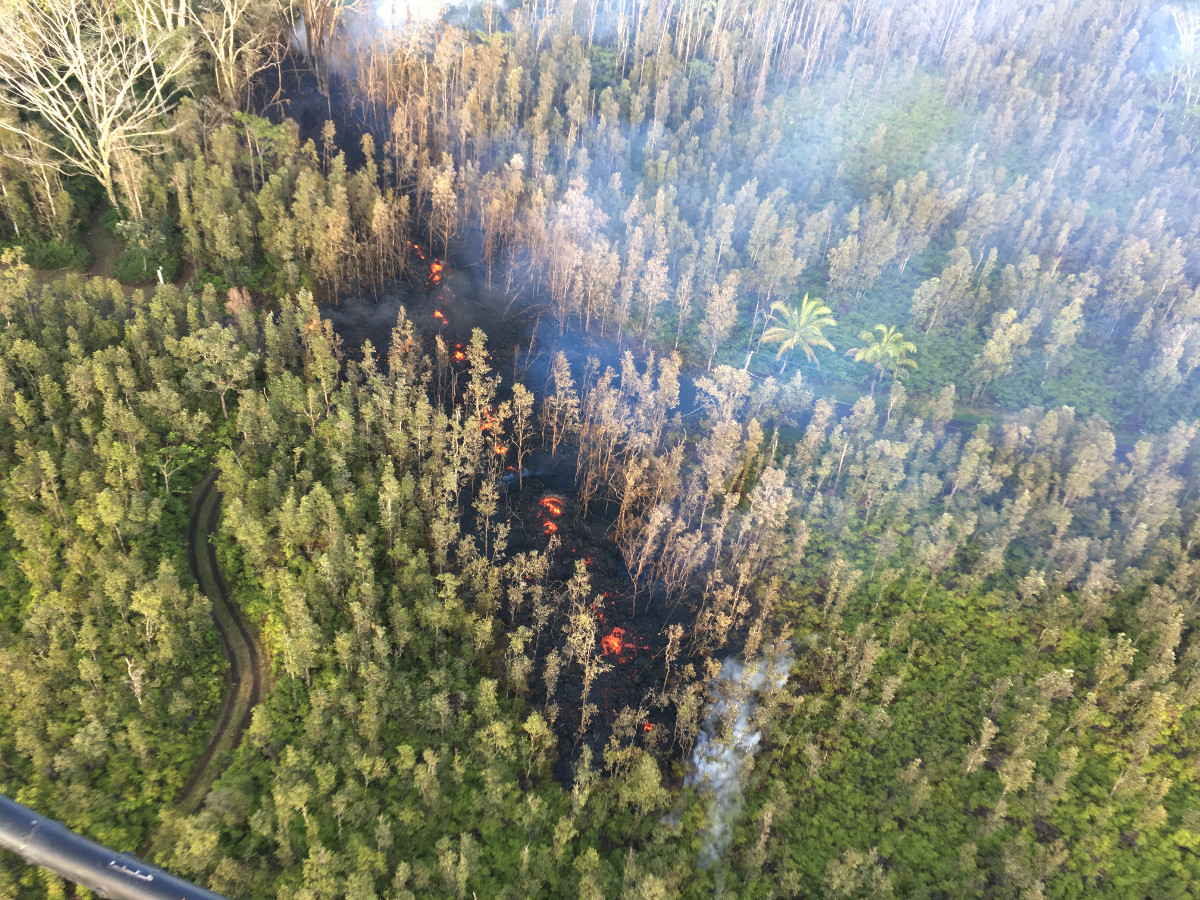 Around 6:30 p.m., as fissure 1 was dying, we were dropped just outside the subdivision, where we joined other HVO staff who had arrived in vehicles. The rest of that night we drove through Leilani Estates monitoring multiple enlarging steam cracks and keeping the observatory and Civil Defense updated on changes.

Around 1:00 a.m., fissure 2 opened in a driveway on Makamae Street, where we could see pulsating lava bubbles and spattering migrate toward the road as the fissure lengthened. This fissure was active for four hours, escalating in intensity and throwing incandescent spatter in large arcuate paths over adjacent powerlines and onto the road. After the larger bursts, we carefully collected samples of the fresh spatter for chemical analyses that would provide clues to the source of the lava. 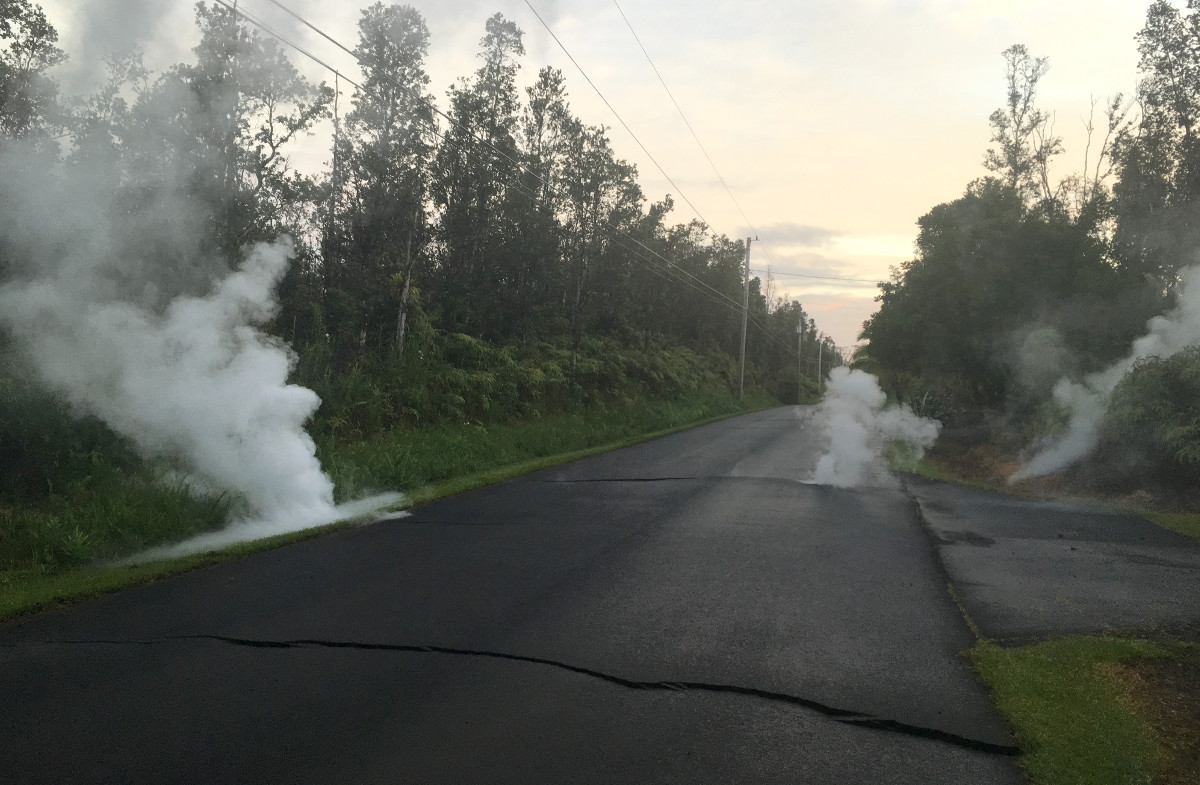 After fissure 2 died down around 5:15 a.m., we continued to circle the subdivision watching for any new activity. At dawn, we discovered increased fuming from a crack cutting Kaupili Street. Thick white fume was pulsing every 10-20 seconds, and we could feel an ominous deep rumble underground that seemed to slowly get closer.

Within minutes, the fume enveloped us in a whiteout, and our gas alarms beeped loudly due to the high sulfur dioxide concentration—a clear sign that magma was close to the surface. Our gas masks protected us, but we had to hastily retreat a hundred meters (yards) to regain visibility.

Through the opaque white fume, we could hear the distinctive sounds of rushing gas, along with the pounding rhythm of bubbles bursting at the surface. Fissure 3 had started, so we transmitted the time and GPS coordinates to the observatory. 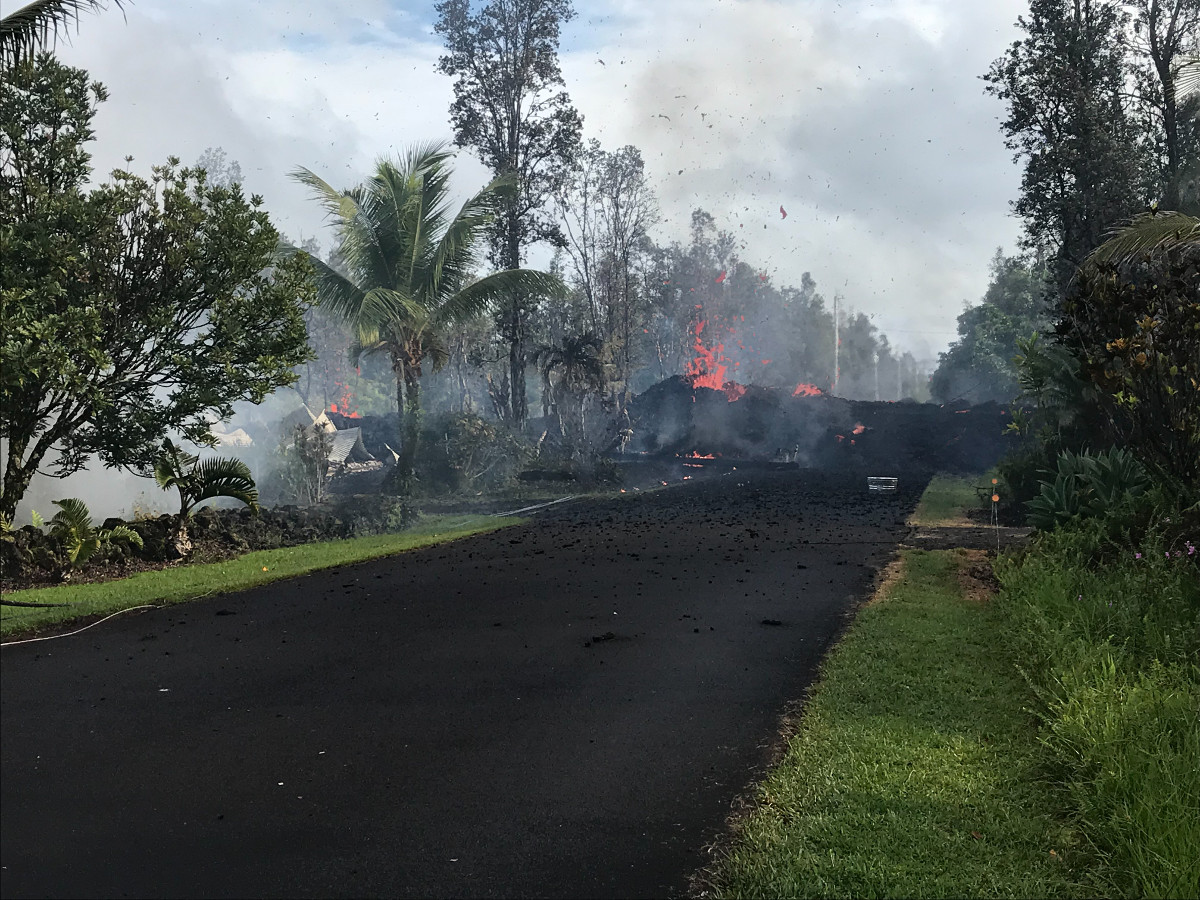 (USGS) Fissure at Leilani and Kaupili Streets in Leilani Estates subdivision at 8:07 a.m. HST. Lava on the road was approximately 2 m (about 2 yd) thick.

The fissure cut through the pavement, but also went directly under an adjacent home, which was rapidly burned. Sadly, it was one of more than 700 structures eventually destroyed in the eruption.

The next HVO field crew arrived at 6:00 a.m., and together we documented the start of fissure 3. Around 7:15, the new crew took over monitoring duties, and we drove back to our offices to write reports, recharge batteries, and rest before our next shift. That ended our first day of the 2018 eruption and marked the start of USGS scientists monitoring Kīlauea around the clock for the next three months.