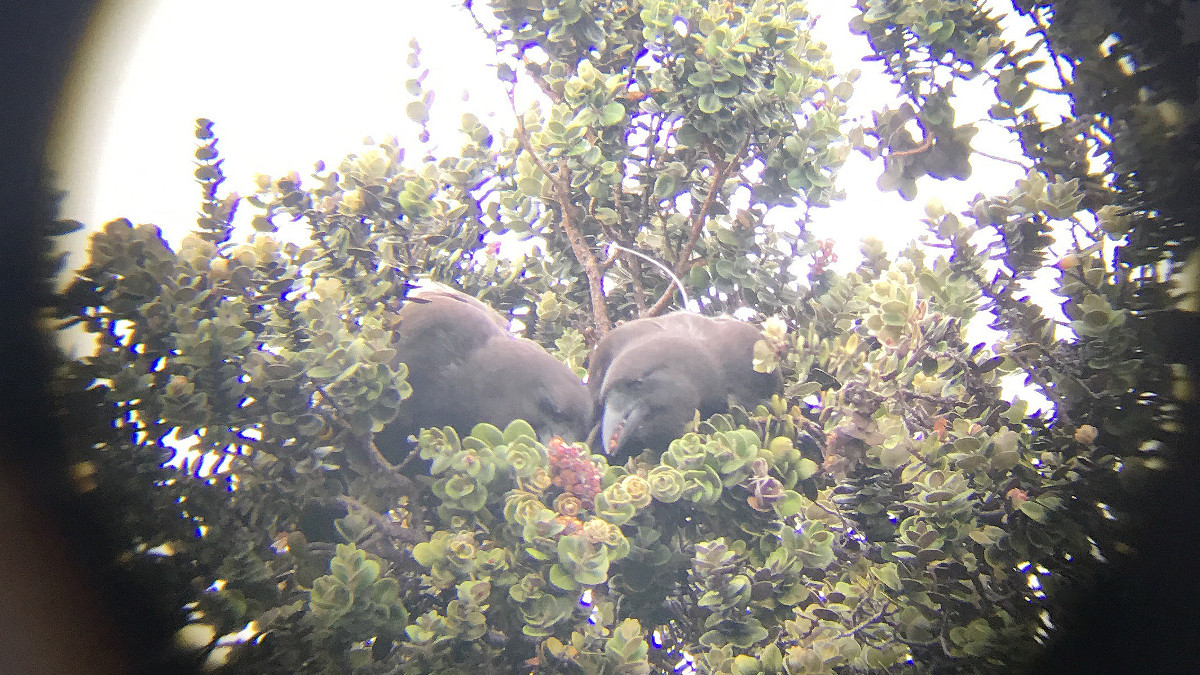 PUʻU MAKAʻALA NATURAL AREA RESERVE, Hawaiʻi - Two Hawaiian crows, Manaʻolana and Manaiakalani, are beginning to build a nest platform structure near the site of their 2017 release into the wild. 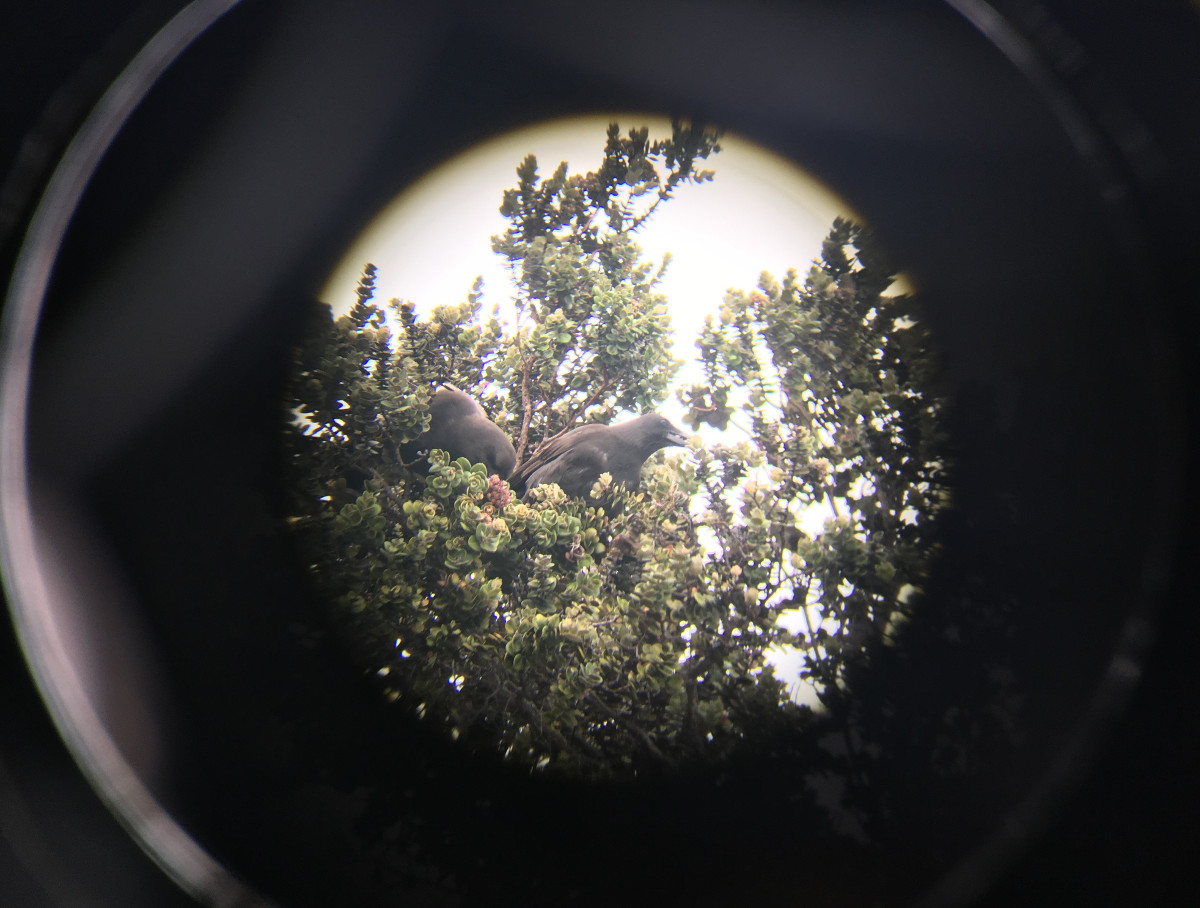 (BIVN) – Partners in the ʻAlalā Project say they have observed a highly anticipated behavior from the critically endangered Hawaiian crows that were released into the wild almost two years ago.

A news release issued on Wednesday says nesting is occurring in the Puʻu Makaʻala Natural Area Reserve. It is the first nesting behavior seen since the ʻAlalā where released into the forest after going extinct in the wild.

From the ʻAlalā Project via the Department of Land and Natural Resources:

Two ‘Alalā in the Pu‘u Maka‘ala Natural Area Reserve have reached a new milestone, one not seen in the forests of Hawaiʻi for almost 20 years. They have built a nest. In early April, team members observed two birds, Mana’olana and Manaiakalani beginning to build a nest platform structure near their 2017 release site. Recently the female, Manaiakalani, has begun what appears to be sitting behavior on this nest structure.

As exciting as this development is, biologists caution there are a lot of factors involved that may impact the success of this first nest. First time parents are not ususally successfull, and it is not ucommon that birds in the wild will make several attempts before they can successfully fledge their chicks.

The ʻAlalā, a native Hawaiian crow that went extinct in the wild nearly a quarter of a century ago, have been hatched and reared at the Keauhou and Maui Bird Conservation Centers as part of a partnership between the State of Hawaiʻi Dept. of Land and Natural Resources Division of Forestry and Wildlife, San Diego Zoo Global, and the U.S. Fish and Wildlife Service. Over the past two years twenty-one birds have been released into protected forest areas on the island of Hawaiʻi.

“While it’s difficult to see exactly what’s in the nest from observations on the ground we do believe that Manaiakalani is likely sitting on eggs and we’ve observed her male partner, Mana’olana bringing her food regularly,” said Dr. Alison Greggor, Postdoctoral Research Associate, with the Institute for Conservation Research, San Diego Zoo Global. ʻAlalā typically lay between three and five eggs and will incubate them for an average of twenty-one days. If these eggs hatch the chicks would be the first ʻAlalā hatched in the wild in two decades.

Another formed pair, Kia’ikūmokuhāli’i and Ola, have been seen placing sticks in the nook of an ʻŌhiʻa tree. Although, the structure of it and the amount of sticks was not enough to call it a nesting platform yet, Dr. Greggor notes that it’s very encouraging to see the beginnings of nesting behavior by at least two pairs of ʻAlalā.

This breeding attempt is the first made by these two birds. Since there are no adult ʻAlalā in the wild to learn from, the reintroduced birds have had to learn how to build nests, breed, and incubate, also guided by instincts. Jackie Gaudioso-Levita, the ʻAlalā Project coordinator and a wildlife biologist with DLNR/DOFAW, commented “While these are exciting and encouraging steps in the reintroduction process of ʻAlalā, the journey is far from over. There are many stages in the process, before the young fledge; the pair encounters natural and introduced threats, as well as environmental challenges.

The team tries to help nesting birds as much as possible without causing disturbance.” Currently, team members are monitoring the nest discretly, from a far distance, and documenting observations of the behaviors of Manaʻolana and Manaiakalani.

“Hawaiian forests are family; there is a shared ancestry among the people, plants, animals, and landscapes. By returning the ʻAlalā to the wild, we are welcoming home a family member that has been away for a long time” said Rachel Kingsley, Education and Outreach Associate for The ʻAlalā Project. She continued, “The fact that these birds have been able to build a nest on their own shows that these birds are comfortable in the forest they live. Our family is growing.”

The outcome of this nest will help to guide future reintroduction efforts for the ʻAlalā. The next release of birds, scheduled for later in 2019 is currently being finalized.

“Regardless of the success of this particular nest, the fact that there is a nest at all is an encoraging and inspiring milestone in the long term success of this project,” said Michelle D. Bogardus, Maui Nui & Hawaiʻi Island Team Manager for the U.S. Fish and Wildlife Service.