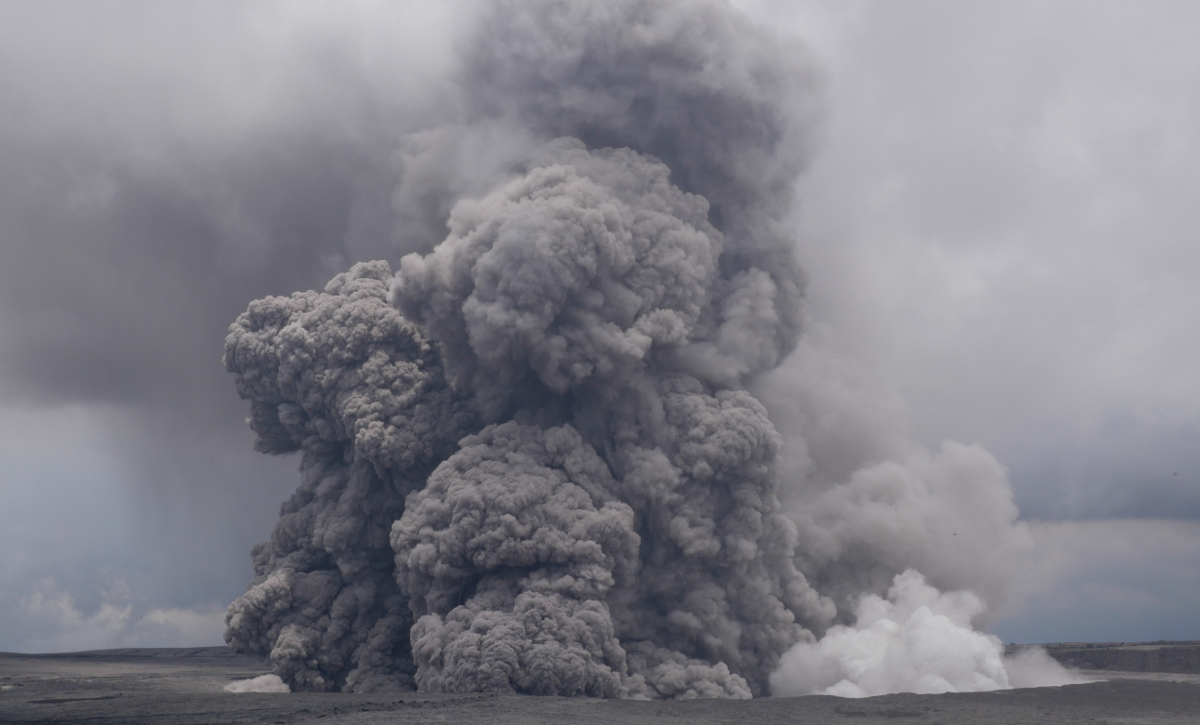 Ash rises above Halemaʻumaʻu within Kīlauea’s summit caldera in this May 27, 2018, telephoto image from near Volcano House Hotel in Hawaiʻi Volcanoes National Park. USGS photo by K. Anderson.

HAWAIʻI VOLCANOES NATIONAL PARK - The speed of a summit collapse, the connection between the summit and the lower East Rift Zone, and changes in "seismic velocity", are touched upon in the latest USGS article. 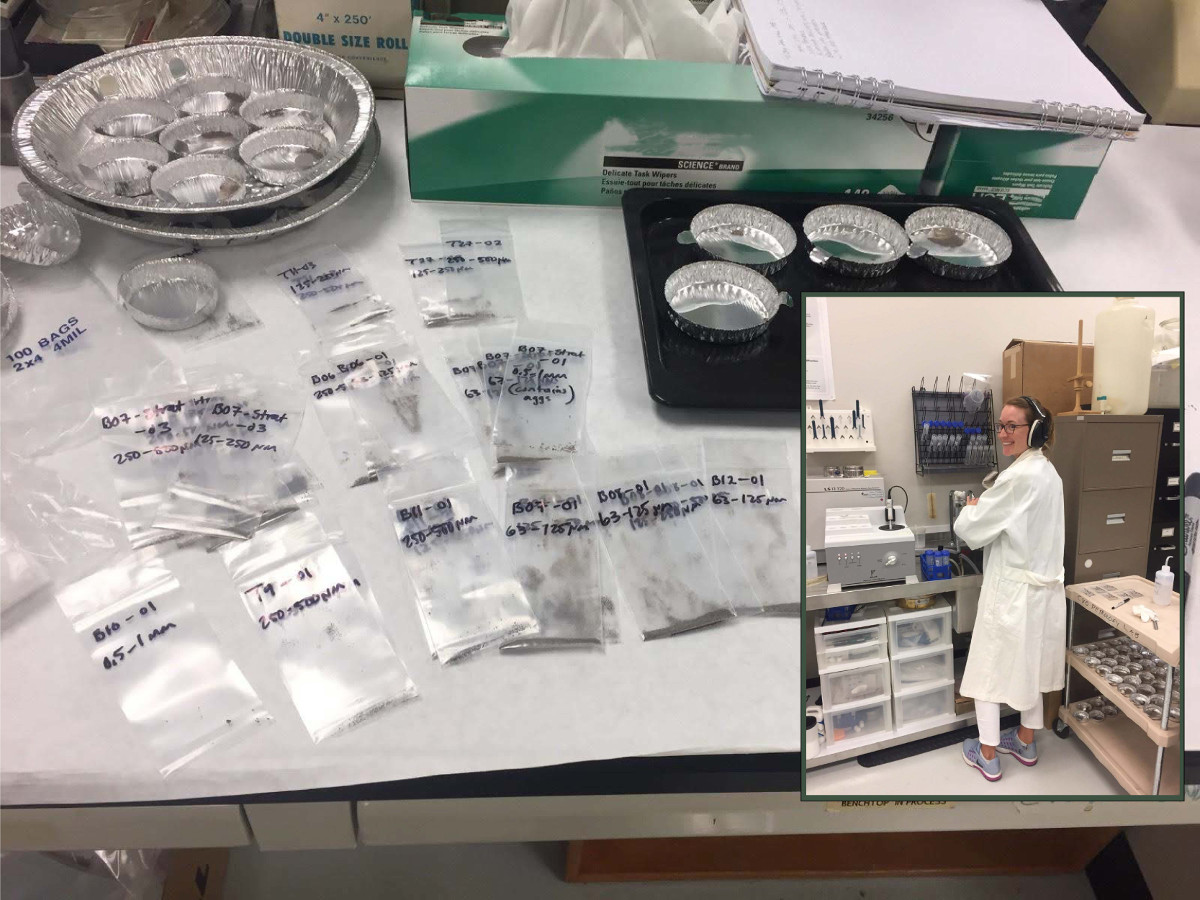 (BIVN) – Kῑlauea Volcano is not erupting and its USGS Volcano Alert level remains at NORMAL, scientists say, as the USGS again looks back at the dramatic eruption of 2018 to inspire another Volcano Watch article.

A year ago, USGS Hawaiian Volcano Observatory scientists and Island of Hawaiʻi residents were in the throes of an historically unprecedented series of events for Kīlauea.

By early April 2018, the volcano showed signs that change was coming. But details were elusive, even as monitoring instruments tracked an increasingly pressurized magmatic system from Kīlauea’s summit to Puʻu ʻŌʻō on the East Rift Zone.

Magma below Puʻu ʻŌʻō was immediately on the move, heading toward the lower East Rift Zone (LERZ). The ground heaved slightly in response, with earthquakes delineating the path of molten rock as it pushed downrift and toward the surface.

On May 3, lava erupted within Leilani Estates. So began the largest eruption on Kīlauea’s LERZ in over 200 years.

Over the next weeks, the summit lava lake withdrew deeper into the volcano as magma emptied into the LERZ, as if a valve had been opened at the bottom of an overflowing rain barrel. Aided by the nearly 3000-foot elevation difference between the summit and LERZ vents, the lava lake steadily drained and Kīlauea’s summit collapsed inward. This in turn prompted many felt earthquakes as the volcano’s roof began to strain due to the loss of underlying support.

Recession of the lava lake resulted in near-constant rockfalls into the empty, steep-walled conduit, each one liberating clouds of rock dust and glassy ash. Explosions sent towering columns of ash skyward and, in some cases, littered the ground around Halemaʻumaʻu with dense blocks of rock. Volcano Village and downwind Kaʻū communities experienced dustings of sulfurous ash.

By late May, Kīlauea summit explosions were replaced by episodic collapse events, a process witnessed only a few times at volcanoes around the world, and never with such clarity.

All told, 62 collapse events rocked Kīlauea’s summit, each one releasing energy equivalent to about a magnitude-5.3 earthquake. The repeated shaking took its toll: HVO’s building cracked, as did Jaggar Museum in Hawaiʻi Volcanoes National Park and Highway 11. Park roads and water system and residential foundations in Volcano were also damaged.

A year later, HVO scientists and colleagues continue to process data from 2018. A recent Volcano Watch mentioned what we’re learning from the LERZ eruption.

Prior to 2018, long-held models indicated that explosive summit activity was driven by steam explosions produced by the interaction between groundwater and the hot conduit below Kīlauea’s caldera. But data from several 2018 explosions suggest that magmatic gas is the primary driver.

Rather than necessarily occurring as one big drop, Kīlauea caldera collapse can proceed incrementally over long periods of time, with ground shaking during sustained, rapid summit deflation and episodic collapse posing a major hazard.

Under certain conditions, Kīlauea’s summit and LERZ can be extremely well-connected through the core of the rift zone. This is supported by the rough equivalence of the LERZ erupted volume and the summit collapse void, both on the order of 1 cubic kilometer (roughly 1 billion cubic yards.) Increases in fissure 8 lava output after some collapses attested to the transit of a pressure wave from the summit down the rift zone.

A study led by an international group of scientists has found evidence that seismic velocity—the speed at which seismic waves travel—within Kīlauea’s summit showed measurable changes leading up the 2018 activity. This finding potentially offers another means to forecast eruptive activity.

The 2018 Kīlauea LERZ eruption and summit collapse profoundly impacted people on the Island of Hawai‘i and beyond. While the events were inspiring to us as scientists, they were also deeply sobering as we witnessed up close the great losses suffered by family and friends.

HVO staff honor the resilience and aloha of island residents, who continue to help each other. We also honor the dedication of everyone who worked to keep people safe. Finally, we thank affected communities and local, state, and federal partners for supporting HVO. Kīlauea’s 2018 events did indeed take a village!