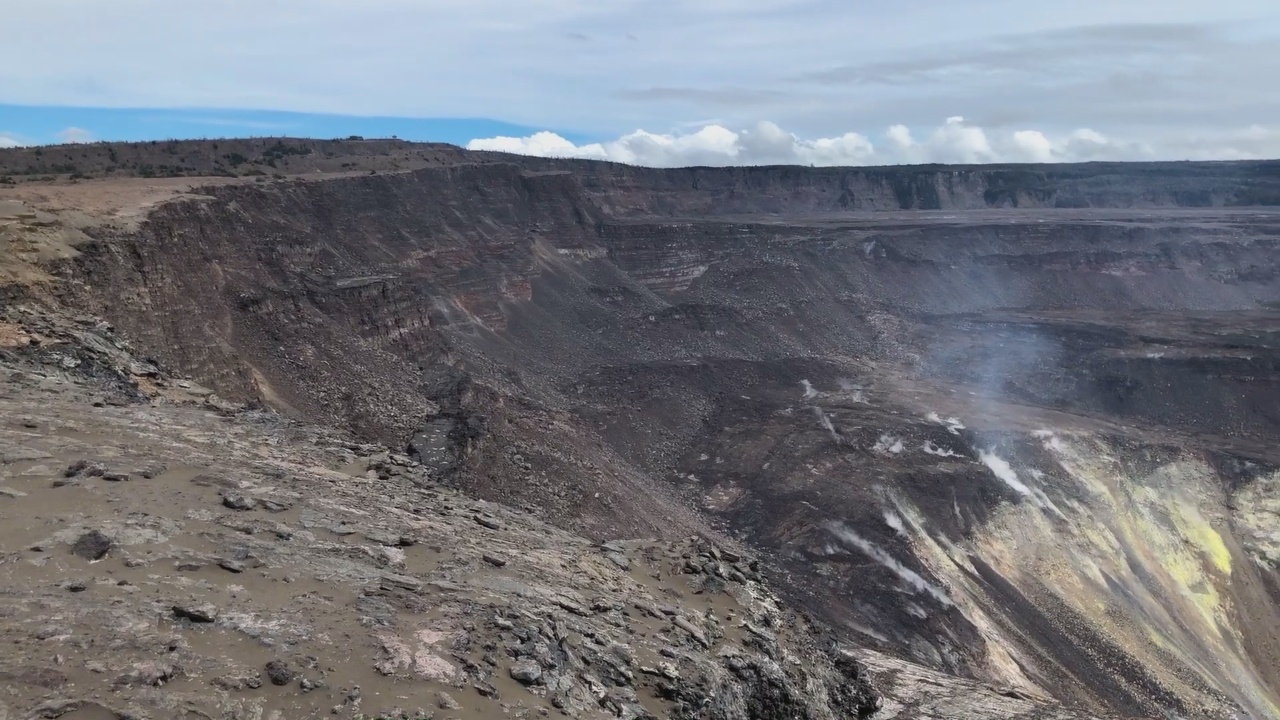 Image from National Park Service video taken on March 15, 2019, showing the changes and expansion of Halema‘uma‘u, the summit crater of Kīlauea volcano, following the dramatic collapse events of 2018.

HAWAIʻI VOLCANOES NATIONAL PARK - Although monitoring data reveals no significant changes in volcanic activity over the past week, scientists are tracking modest inflationary tilt at the summit.

(BIVN) – After months of weekly reports on the status of Kīlauea Volcano that had little variation, the USGS Hawaiian Volcano Observatory on Tuesday noted something different.

Kīlauea is not erupting, and the volcano is at NORMAL/GREEN alert level. But scientists say it will erupt again at some point in the future. USGS HVO is carefully monitoring the summit, which collapsed after the 2018 eruption on the lower East Rift Zone.

In a May 14 update, scientists wrote:

Since early March, tiltmeters at the Kīlauea summit have recorded modest inflationary tilt. Over about the same time period, a GPS station within the 2018 collapse area has recorded approximately 5 cm (3 inches) of uplift. Satellite radar data (InSAR) show deformation consistent with inflation of the shallow Halemaʻumaʻu source, confirming the trends noted by both tiltmeters and GPS. One possible interpretation is that magma has begun to slowly accumulate within the shallow portion of the Kīlauea summit magma system, 1-2 km or approximately 1 mile below ground level. However, gas measurements have yet to indicate significant shallowing of large volumes of melt. HVO continues to carefully monitor gas output at the Kīlauea summit and East Rift Zone for important changes.

In a recent interview, USGS HVO Scientist-in-charge Tina Neal said, based on what has happened in similar events of the past, the most likely scenario for a future eruption is that “it will take a couple of years for magma to accumulate with sufficient pressure to reach the summit”, and then “lava would first erupt in the summit caldera, and that a rift zone eruption – either southwest or east rift zone – would be sometime later. But that’s by no means a certainty. We’ve put this out in a sense of a hypothesis to see if the model holds.”

In its weekly update, USGS said that “although we expect clear signs prior to a return to eruption, the time frame of warning may be short.”

Meanwhile, “further east, GPS stations and tiltmeters continue to show motions consistent with refilling of the deep East Rift Zone magmatic reservoir in the broad region between Puʻu ʻŌʻō and Highway 130,” scientist repeated. “This trend has been observed since the end of the 2018 eruption, and while its significance is unclear, monitoring data do not suggest any imminent change in volcanic hazard for this area.”

As for earthquakes, USGS says: “Generally low seismicity continues across the volcano, with earthquakes occurring primarily in the summit and south flank regions. The largest Kīlauea earthquake over the past week was a M2.9 event near Keanakākoʻi Crater on May 11, at a depth of 3.1 km (1.9 miles) below ground level. USGS received 6 felt-reports following this event.”