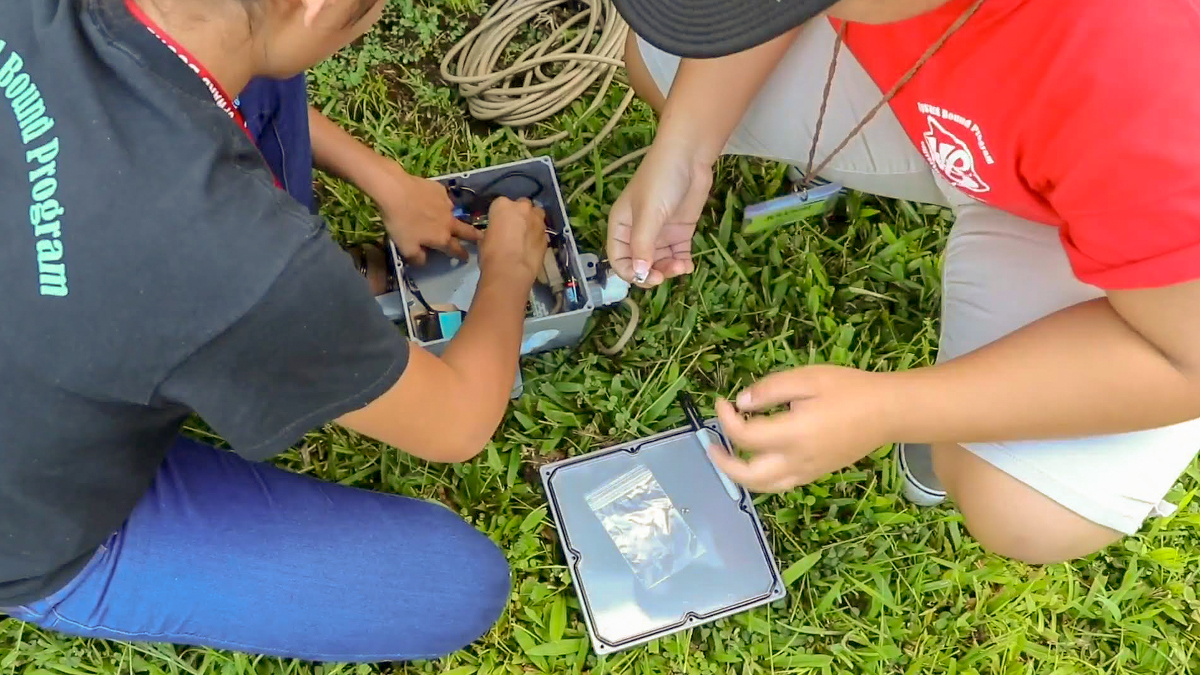 Teaching Through Technology (T3) Alliance students in the University of Hawai‘i Hilo Upward Bound summer program install a large display showing measurements from their air-quality monitoring station outside the Pāhoa Community Center, which was used as a temporary shelter for displaced residents from Kīlauea Volcano’s 2018 eruption. Photo courtesy of Adam Low, T3 Alliance.

HAWAIʻI ISLAND - The USGS writes about how students with the Teaching Through Technology program deployed air quality sensors during the 2018 eruption of Kīlauea Volcano. 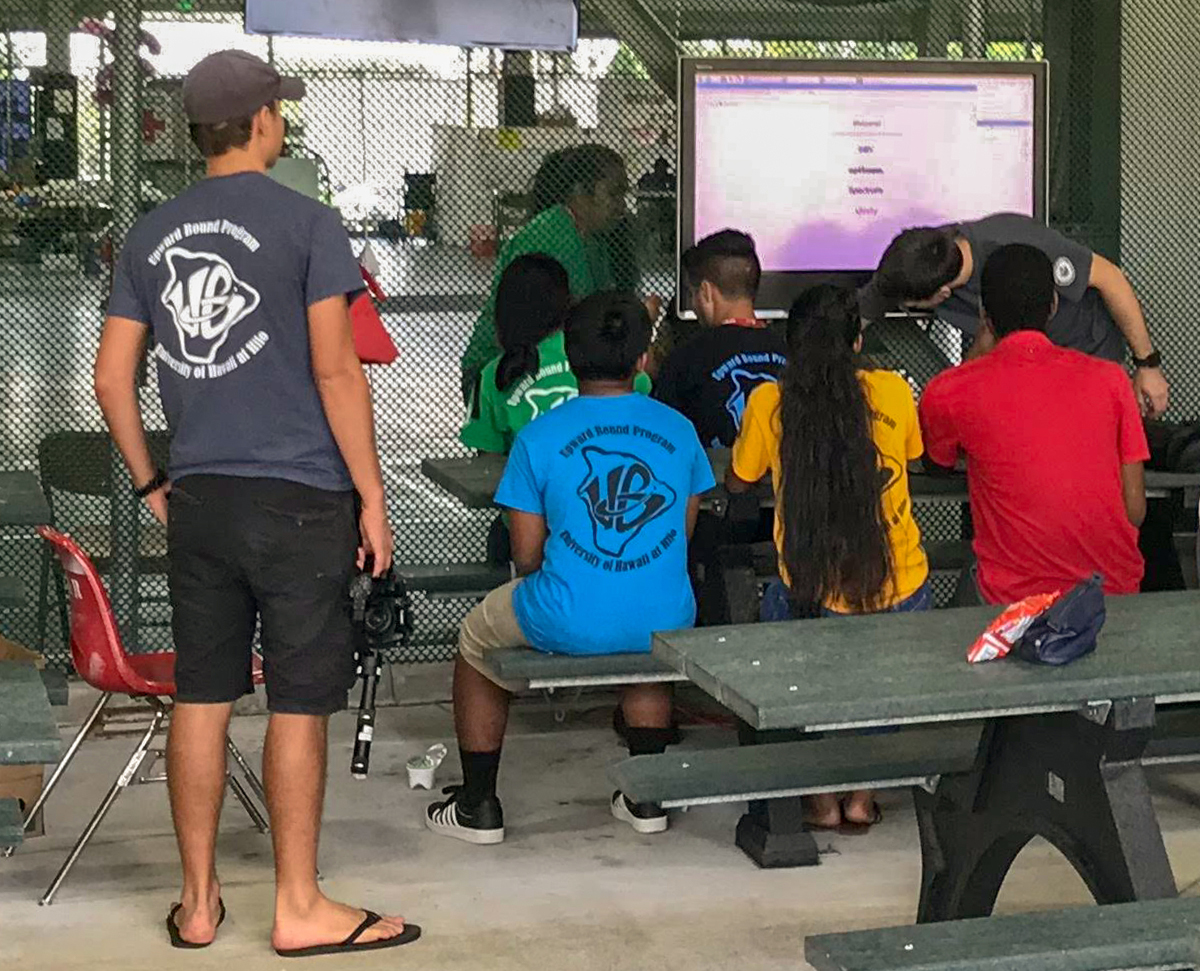 (BIVN) – In this week’s Volcano Watch article by U.S. Geological Survey Hawaiian Volcano Observatory scientists and affiliates, the role of students during the 2018 eruption of Kīlauea Volcano is detailed.

This week’s article was written by HVO geophysicist Jefferson Chang.

During the 2018 eruption of Kīlauea Volcano, when fissures erupted and lava flowed in the lower East Rift Zone (LERZ), many Puna residents were displaced from their homes. We, as a community, watched from the sidelines as the eruption went on, helpless in averting the course of nature.

Although the 2018 event was profound, residents not in the eruption’s path had to tend to their daily duties. People still went to work, and students still went to school.

In the middle of this, only a few weeks after joining the USGS Hawaiian Volcano Observatory staff, I met a group of enthusiastic high school students from Kea‘au, Hilo, Honoka‘a, Konawaena, and Kealakehe. They were enrolled in an Upward Bound summer program at the University of Hawai‘i Hilo, led by instructor Adam Low. The program, Teaching Through Technology (T3), was aimed at teaching students Science, Technology, Engineering, and Math (STEM) and discovering how STEM can help address societal and environmental concerns.

During the program, the students became familiar with simple sensors and an inexpensive credit-card sized computer called a Raspberry Pi. One of their early projects involved attaching a camera to the Raspberry Pi and creating a “photo booth” at an incoming freshmen orientation event. The students coded their own software so that when a photo was taken, the computer would send the image to the subject’s email address.

Empowered with their newly minted skillsets, the students decided to apply their classroom activities beyond academic learning and into a more practical and needed application.

As lava erupted from fissures in Leilani Estates on Kīlauea’s LERZ, so did noxious gases. Sulfur dioxide (SO2) is an extremely irritating gas that is released from shallow or erupting lava. This gas reacts in the atmosphere to form sulfuric acid droplets, which can irritate the eyes, nose, and throat.

The Hawai‘i State Department of Health (HDOH), as well as other agencies, monitor SO2 gas and particulate matter (PM) emitted from Kīlauea. These data are provided in near-real time to the public via the HDOH website.

About half of the students were either directly impacted, or related to someone directly impacted, by Kīlauea’s LERZ eruption. The students decided that they could help their communities by deploying air-quality sensors. They put together a proposal and submitted it to the University of Hawai‘i Hilo Upward Bound director, Len Woods, for funding. The proposal outlined their mission and the equipment needed.

With funding in hand, the students built and deployed six air-quality monitoring stations using a PLANTOWER PMS5003 sensor for particulates and a SPEC GDS-SO2 968-038 sensor for ambient temperature, humidity, and SO2 concentration. They installed the stations in communal hubs, such as the Dragon’s Eye Learning Center on Papaya Farms Road, the Volcano School of Arts & Sciences in Volcano Village, the Ka‘ū Coffee Mill in Pāhala, and the evacuation shelters at the Kea‘au Armory and Pāhoa Community Center.

Another station was co-located with a HDOH air-quality station at Rainbow Falls in Hilo for ground-truthing. They programmed a screen display to show the level of ambient temperature, humidity, particulates, and SO2 at each site, and created a website that showed real-time readings from their monitoring stations.

At Kīlauea Volcano’s summit, episodic collapses within the caldera were producing unprecedented levels of seismic activity. So, the students also installed a Raspberry Shake, which is a small seismic sensor connected to a Raspberry Pi, at the Volcano School of Arts & Sciences to monitor the hundreds of earthquakes happening daily. Data from the Raspberry Shake were streamed and publicly shared with a global community of citizen seismologists via a website.

Seventeen high school students did all of this. All it took was a bit of knowledge, support, and passion. I look forward to working alongside this next generation of colleagues and using science for the benefit of our communities.